Prominent effect of platelet on improvement of liver cirrhosis

Globally, chronic liver dysfunction, including liver cirrhosis, is a common disease of the liver (1). Radical treatment for liver cirrhosis is liver transplantation. However, only a few patients undergo liver transplantation because of donor shortages in every country. It was reported that maintaining platelet counts above approximately 60% of normal counts with platelet transfusion, administration of thrombopoietin (TPO) or a TPO receptor agonist improves liver function and decreases postoperative complications after liver resection (2). TPO is well known to increase platelets in patients with idiopathic thrombocytopenic purpura or chronic hepatic diseases (3). TPO is produced by hepatocytes of the liver, but the production of TPO deteriorates in the cirrhotic liver (4). Recombinant human TPO (rhTPO) is produced in mammalian cells and can activate c-Mpl, which increases the platelet count in bone marrow (5). Therefore, treatment with rhTPO is aimed at increasing platelet counts even in patients with liver cirrhosis. In this paper, we described the effect of administration of rhTPO in a patient with liver cirrhosis whose platelet count was extremely low and the effect of the increments of platelets on liver dysfunction.

An 82-year-old male patient was diagnosed with liver cirrhosis due to hepatitis C virus infection in the affiliated hospital at Jiangsu University. He contracted hepatitis C virus infection by transfusion when he was 23 years old. Subsequently, he had a high alpha fetoprotein (AFP) level for 5 years, diabetes for 5 years, insulin and sitagliptin phosphate treatment, myocardial infarction with percutaneous coronary intervention therapy 6 years earlier and treatment with benazepril hydrochloride and clopidogrel bisulfate for 6 years. He felt discomfort and complained of weight loss in the past 2 years and abdominal girth enlargement for 1 year. The patient sometimes had bloody urine. In the past year, he received plasma transfusions several times, but his platelet numbers were still decreasing. Laboratory tests revealed severe thrombocytopenia and hypoalbuminemia (Table 1). Child–Pugh classification was Child B. Computed tomography (CT) scan showed liver cirrhosis with moderate ascites (Figure 1A). Only a cyst was recognized in the liver, and hepatocellular carcinoma (HCC) was not indicated. After assessment of the protocol by the ethical committee of the hospital (Clinical Trial No. ChiCTR1800019523) with informed consent, the patient received an injection of recombinant human thrombopoietin (rhTPO) every week for 12 months. The schedule of administration of rhTPO (3SBIOInc., Shenyang, China) was 150,000 U once daily subcutaneously in the first week,150,000 U every 2 days subcutaneously in the second week, and continuing the administration of 150,000 U 2 times per week subcutaneously for 12 months. Prior to and during administration of rhTPO, 20 mg of furosemide and 40 mg of spironolactone were prescribed every day. As a result, the platelet count increased to over 50×109/L after 7 days and was maintained at 60–80×109/L by administration of rhTPO (Figure 1B). After 12 months of administration of rhTPO, the ascites resolved, the albumin (ALB) and cholinesterase (ChE) increased, and prothrombin time (PT) improved (Figure 1C,D). The levels of serum ammonia, D:D-double polymer (D-D) and AFP decreased. On CT scan, the ascites resolved without diuretics, and the liver volume increased from 1,480 to 1,540 cm3 (calculated with OsiriX-Lite, v.10.0.2, Pixmeo, Ltd., Bernex, Switzerland) after administration for 10 months. However, a small tumor stain, which was newly suspected as HCC, was recognized (Figure 1E). However, the administration of TPO was still continued because the patient’s general condition remarkably improved after administration of rhTPO. 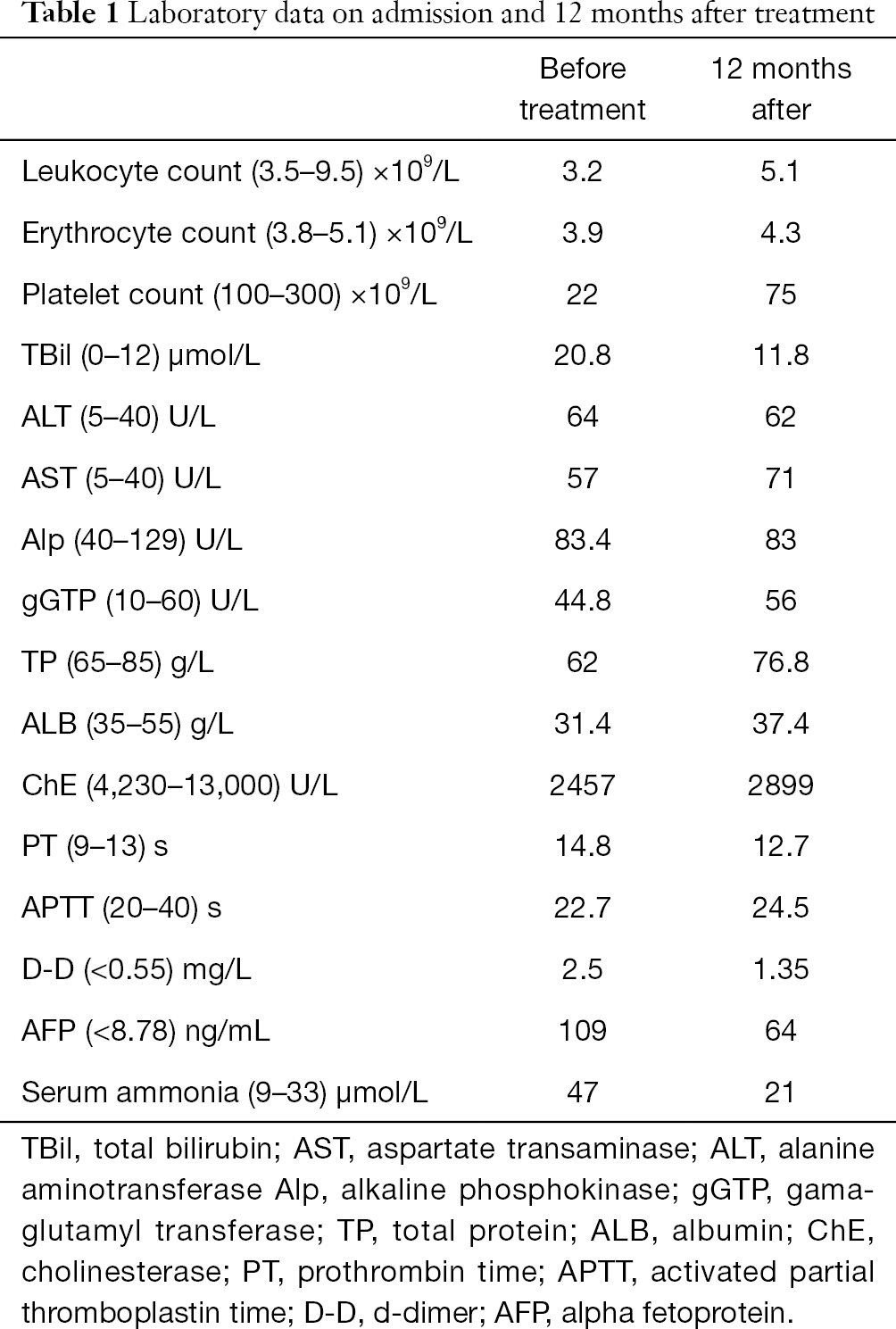 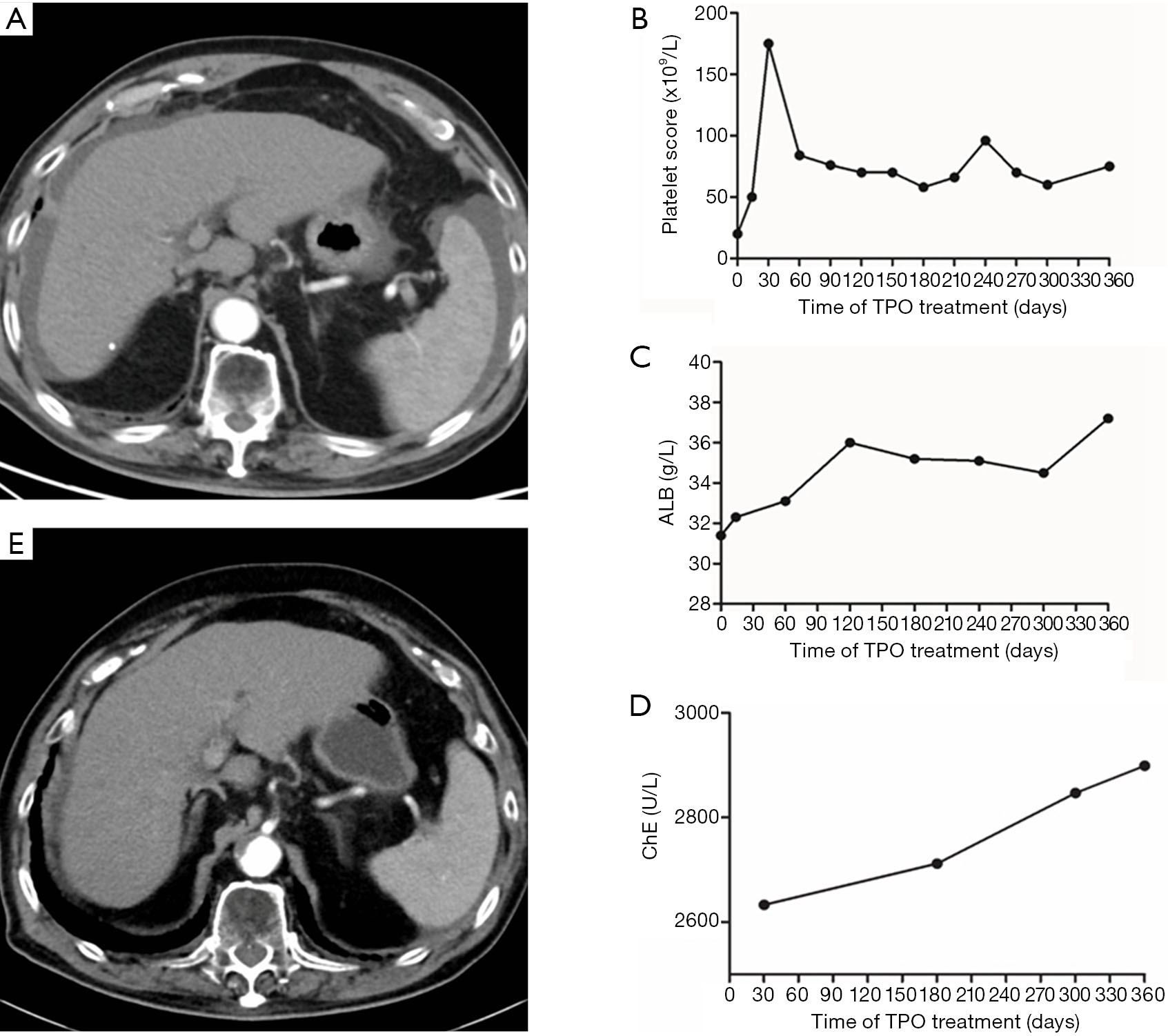 An 82-year-old male had liver cirrhosis with ascites due to hepatitis C virus infection (Child–Pugh classification Child B). He received human recombinant TPO for 12 months. The platelet counts increased and were maintained at 60–80×109/L. The liver function improved, the ascites resolved, and the liver volume increased.

It is well known that there are few effective therapies to improve liver dysfunction, especially liver cirrhosis. The only radical therapy for liver cirrhosis is liver transplantation, but in every country, liver transplantation is uncommon because of donor shortages (6). One of the reasons for the difficulty in treating liver cirrhosis is that liver fibrosis becomes severe, and there is no effective way to dissolve the collagen in the liver. Sakaida et al. reported that bone marrow transplantation was effective for improving liver cirrhosis (7), but the procedure was invasive and complex for patients. In recent studies, it has been shown that platelets have a special effect on the liver, such as improvement of fibrosis, promotion of liver regeneration and prevention of liver injury (8-10). In fact, Maruyama et al. reported that transfusion of platelets could improve liver function and liver fibrosis (11). However, increasing the number of times the platelets are transfused would inevitably carry a high risk of inducing antibodies to the platelets (12). Therefore, treatment with increments of platelets should be carried out for safe and effective therapy instead of platelet transfusion. To maintain the number of platelets, TPO is the strongest agent (13), and we can control platelet numbers by the administration of TPO. rhTPO (3SBIOInc., Shenyang, China) as an agent for the activation of platelet generation, was registered in 2005 and has been approved by the CFDA for two indications: first, for the treatment of chemotherapy-induced thrombopenia (approved in 2005) and second, for immune thrombocytopenia (ITP) (approved in 2010) (14). Kurokawa et al. reported that treatment with eltrombopag, which is an analog of TPO, was not effective for improving liver function (15). They stated that one of the reasons was that the Child–Pugh score of the patients was A, and the duration of TPO administration was short. However, the effectiveness of long term administration of rhTPO on patients with cirrhosis is expected but has not been reported.

HCC can occur in patients with chronic hepatitis and liver cirrhosis (16). Nozaki et al. reported that the TPO receptor was not recognized in HCC as for normal hepatocytes (10). Therefore, if the patients have HCC, TPO has no effect on the growth of HCC. In the present patient with liver cirrhosis, the platelets increased due to administration of TPO, and liver function improved remarkably. The study is limited by our reporting of only one case.

Platelet therapy by TPO will become a new therapy for improving liver cirrhosis. However, more clinical trials are necessary to confirm this conclusion.

Conflicts of Interest: All authors have completed the ICMJE uniform disclosure form (available at http://dx.doi.org/10.21037/acr.2020.04.02). The authors have no conflicts of interest to declare.

Ethical Statement: The authors are accountable for all aspects of the work in ensuring that questions related to the accuracy or integrity of any part of the work are appropriately investigated and resolved. Written informed consent was obtained from the patient for publication of this manuscript and any accompanying images