Vasoactive intestinal polypeptide (VIPoma) is defined as a neuroendocrine pancreatic tumor with intestinal vasoactive peptide secretion (1). It is considered rare in the current literature, mainly due to being difficult to diagnose early and having undefined symptoms such as diarrhea and recurrent vomiting, thus being commonly discovered randomly (2). The following case aims to evaluate a complicated treatment and identification of a male 34-year-old in the Brazilian Amazon region. Also, for clearness, we present the next case following the CARE Guideline.

A 34-year-old Caucasian male with a history of treatment for a Helicobacter pylori infection for six years, reports episodes of diarrhea of yellowish and liquid appearance without mucus or blood after video laparoscopic cholecystectomy, with a progressive increase in its frequency and without proper follow up. Five years later, the patient reports worsening of the initial condition, associated with weight loss of 16 kilograms in approximately two months, dizziness, generalized malaise, and hyporexia. He began symptomatic treatment with omeprazole and underwent general laboratory tests, which detected hydro electrolytic imbalance with hypokalemia (1,3). The gastroenterology team hospitalized the patient for potassium replacement and diagnostic investigation for sixteen days. During hospitalization, he underwent an upper endoscopy (EDA) and colonoscopy with biopsy for suspected colitis, no specific findings or signs of severity were detected, only pan-gastritis on the EDA, and enanthema with microulcerations on the colonoscopy. High-result fecal calprotectin (1,160 micrograms/gram) was measured.

Subsequently, the patient was subjected to treatment with prednisone daily and mesalazine but presenting allergic manifestations to the latter. Abdominal magnetic nuclear resonance (MRI) and abdominal computed tomography (CT) were made, showing a solid tumor with enhancement after contrast of 4.8 cm × 4.0 cm in the pancreas tail. He was discharged after hydro electrolytic correction, with a referral to the outpatient surgery for digestive tract surgery (Figures 1-3). Dosages of various elements were requested to define a diagnosis, such as glucagon, somatomedin C, basal insulin, gastrin, and serum intestinal vasoactive peptide (VIP). From these, only VIP had high values (119.8 PMOL/L; reference value up to 30 PMOL/L), leading to the suspicion of VIPoma, neuroendocrine pancreas tumor with VIP production, which could influence the worsening of diarrheal condition alternatively, until it started. 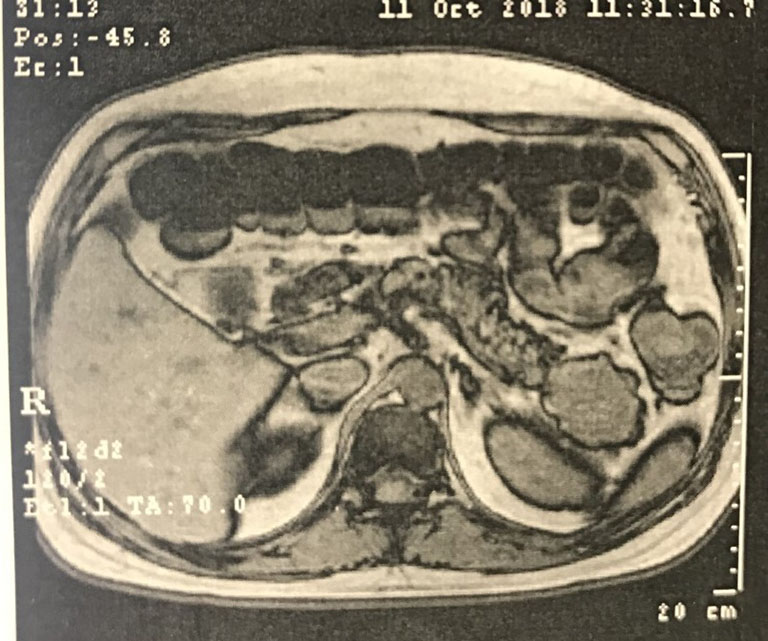 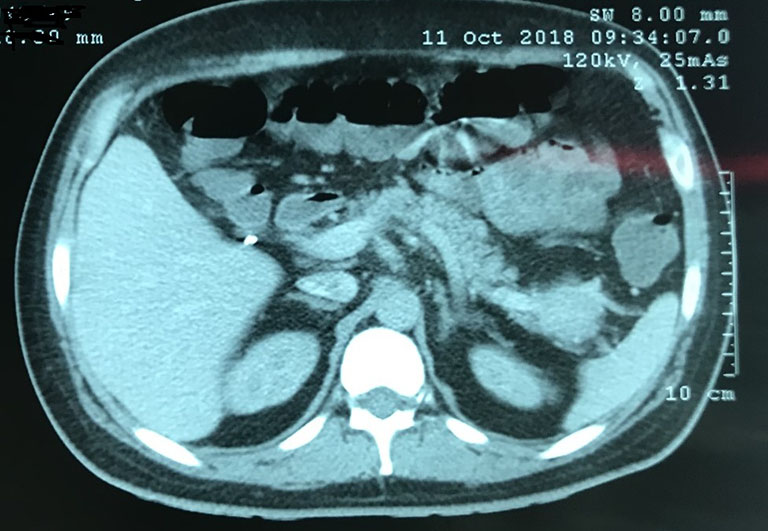 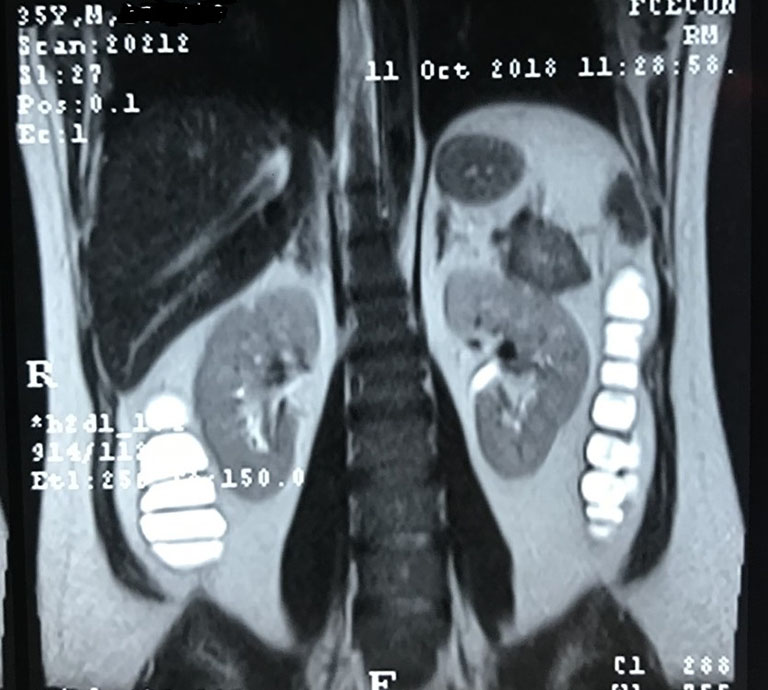 He was hospitalized after two months for new potassium replacement for three days and underwent a laparotomic caudal body pancreatectomy with splenectomy using a linear stapler. He was discharged on the fifth postoperative day, without complications after the procedure, in good clinical condition, and without symptomatologic complaints, with guidance for follow-up for treatment, in which the Waterman drain was removed after two days (Figure 4). However, the following day, the patient developed moderate left flank pain above the umbilical line that irradiated to the hypochondrium and ipsilateral shoulder during inspiration, associated with fatigue and hyporexia, without fever, and was hospitalized again for pancreatic fistula investigation. Chest and abdomen computed tomography revealed left pleural effusion associated with possible infectious lung disease, and liquid collection in the abdominal cavity with contrast enhancement in close contact with the pancreatic body, stomach, and descending colon. He underwent laparoscopy for intracavitary abscess drainage, progressing without further postoperative complications. The patient underwent treatment with piperacillin, tazobactam, and metronidazole for approximately eight days. He was discharged on a ninth day after surgery in good clinical condition and without complaints. 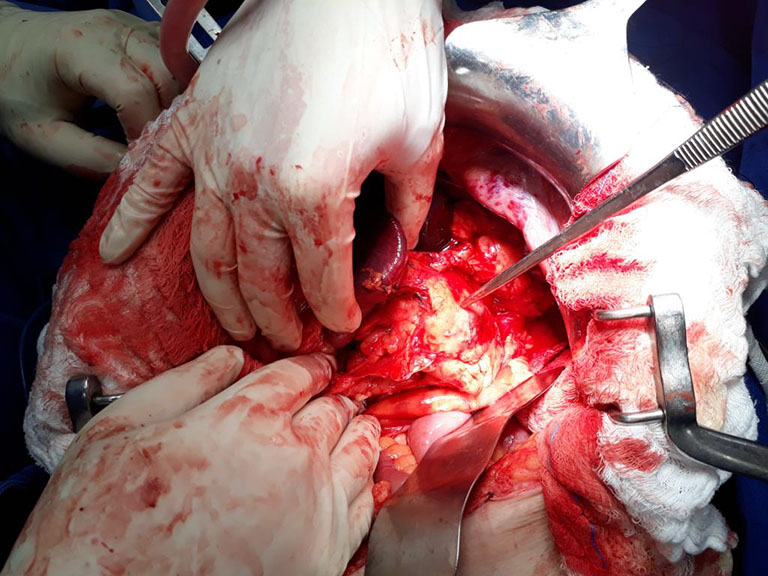 Figure 4 Open laparotomy, showing the removal of the tumor.

Histopathological analysis of the surgical specimen was conclusive for a pancreatic tumor. In the immunohistochemical study report, there was the positivity of antibodies chromogranin A, synaptophysin, cytokines, and antigen of cell proliferation (Ki-67), reaching the finding of well-differentiated neuroendocrine tumor.

Most cases of intestinal polypeptide-secreting tumors (VIPomas) are diagnosed in children 2 to 4 years old or adults 30 to 50 years old. It is a rare disease, and due to its low population frequency, approximately 90% of these tumors are not found. It is noteworthy that there are also reports of this tumor in the colon, bronchi, adrenals, and sympathetic ganglia. Besides, there is a correlation with an endocrine neoplasia type 1 (MEN1 syndrome), which also shows tumors in the parathyroid glands, pancreas, and hypophase. This case has evidenced the presence of a tumor in the caudal pancreatic region, which, according to the literature, occurs in 75% of cases. Also, the tumor did not have large proportions in size, as well as the absence of metastases at the time of diagnosis, differing from the vast majority of related cases.

A VIPoma-induced WDHA syndrome, as observed in this case, is characterized by profuse diarrhea that persists for more than three days. This is due to the fact that intestinal epithelial cells increase the application of cyclic AMP, generating an increase in electrolytes in the intestinal lumen causing the symptoms. Thus, 89% of patients have this abundant chronic diarrhea, as well as weight loss (72%) and hypokalemia (67%). Even if these symptoms are evident or early diagnosis is still a challenge for professionals, even more, significant than the cases that are discovered at random. Thus, the study showed that the average time from symptom onset to final diagnosis was greater than 48 months (4).

Although the patient’s plasma VIP level has been elevated, he has a functional neuroendocrine syndrome seen exclusively with VIPoma, supported by his symptomatology, stool studies, and blood chemistry. Therefore, the need beyond postoperative clinical and radiographic follow-up will repeatedly check medical VIP levels to confirm the effectiveness of the surgery. This can be explained by a corresponding increase in biologically active pre-prohormone VIP, that it is difficult to test by compatible means (3). In our case, his serum VIP level has reached 119.8 pmol/L, four times above the reference level.

The diagnosis is made only by combining these estimates with a VIP greater than 75 pg/mL consistent for a VIPoma. Imaging is essential for diagnosing the disease and thus enabling more effective treatment. To do so, it recommends PET-CT Gallium-68 dotatate, which has 97% detection of VIPomas other than contrast-enhanced computed tomography (80%) and magnetic resonance imaging (85%) that have long been used in the medical examination so far (2). In our study, the tumor side was 4.0 cm × 4.8 cm at the tail of the pancreas, finding computed tomography and nuclear magnetic resonance of the abdomen and pelvis, and there are no signs of metastatic disease.

By inhibiting VIP secretion, symptomatic treatment of diarrhea can be obtained with somatostatin analogs such as octreotide or that has led to the resolution of our patient’s symptoms. In addition, somatostatin analogs also affect the stabilizing effects of tumors in 50–60% of PNETs. Glucocorticoids may be another alternative in refractory cases to reduce symptoms. Based on published guidelines, treatment should be guided by mitotic cell rate and cell proliferation (Ki-67) for their classification or what was performed with the patient after discharge. Hepatic lobe resections and hepatic artery embolization or targeted ablation therapy may be required due to the high chance of metastasis but were not needed in this case. Everolimus and sunitinib have recently been used for progressive non-resectable PNETs, such as VIPomas, with improvements in progress-free survival (2). Our case does not respond well to initial clinical therapy but has not been identified as a metastatic disease; we opted for the medical review. We had a postoperative follow-up of free disease with VIP and imaging.

In conclusion, VIPomas are rare tumors, difficult of treatment, and despite having characteristic symptoms, difficulty in their early identification is evident. Therefore, it is essential to consider functional NETs when assessing watery diarrhea. Technological progress in imaging methods was a factor that favored diagnostic accuracy as well as its staging but still requires complementary exams such as serum VIP. The treatment with somatostatin analogs is recommended to control symptoms before surgery (3). Although initial postoperative clinical and radiographic follow-up is encouraging, it will be necessary to repeat serum VIP levels and continue imaging surveillance to confirm that our resection was curative.

Conflicts of Interest: All authors have completed the ICMJE uniform disclosure form (available at http://dx.doi.org/10.21037/acr.2020.04.03). The authors have no conflicts of interest to declare.

Ethical Statement: The authors are accountable for all aspects of the work in ensuring that questions related to the accuracy or integrity of any part of the work are appropriately investigated and resolved. Written informed consent was obtained from the patient for publication of this Case report and any accompanying figures.