Primary renal lymphoma: a case report and review of the literature

Diffuse large B-cell lymphoma (DLBCL) is the most common subtype of non-Hodgkin’s lymphoma (NHL) and is responsible for 30–40% of adult NHL cases globally, according to the World Health Organization’s (WHO) classification of neoplastic diseases of the hematological and lymphatic systems (1). This tumor is clinically, morphologically, and genetically heterogeneous. At present, the advent of genomic technologies has allowed molecular subtyping of this heterogeneous disease process in both human and dogs (2-4). Although renal involvement has been reported in 30–60% of all patients diagnosed with NHL (5), primary renal lymphoma (PRL) is a very rare disease and is often mistaken for renal cell carcinoma (RCC). Occasionally, patients with PRL present with nonspecific symptoms and signs, as well as flank pain, weight loss, fever, hematuria, and a palpable mass (6). In addition, the B-cell immunophenotype of PRL is a common pathological type (7), and so far, more than 50 cases have been reported in the literature.

A 68-year-old Chinese man visited the local hospital because of persistent pain on the right side of his waist. The pain lasted for half a year and recently worsened. He underwent an enhanced CT examination (Figure 1) in the local hospital, and a mass (8.5×6.8 cm in diameter) was noted in the right kidney. He was then transferred to our hospital for surgical treatment. During the course of the disease, he did not lose weight. He had a history of hypertension, and he had undergone cholecystectomy in 2008. He denied any history of familial infective or genetic disease. 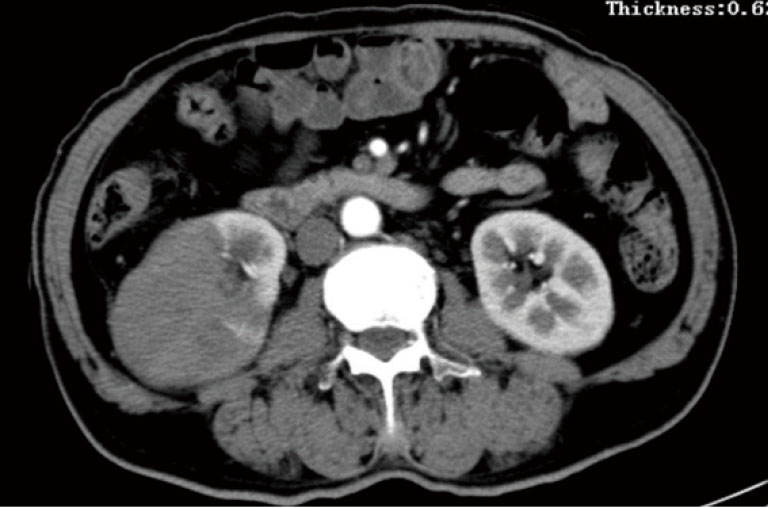 Figure 1 A contrast-enhanced CT finding at the disease onset shows a huge mass (8.5×6.8 cm in diameter) of the right kidney.

He underwent radical nephrectomy and lymph node dissection. Postoperative immunohistochemical staining (Figure 2) showed DLBCL with the following results: CD3(-), CD20(+++), Pax-5(+++), Ki-67(>80%,+), CD10(+), Bcl6(+), MUM1(+), Bcl2(+), CMyc(+), CD30(-), CK(-), CD21(-), CD5(-), EMA(-). He was considered to have DLBCL (origin at the germinal center). Postoperative pathology and immunohistochemistry indicated DLBCL, which only localized in the kidney. Bone marrow biopsy and CT of the chest region did not show any evidence of lymphoma invasion. According to the findings, he was diagnosed with PRL. After operation the patient received the R-CHOP (rituximab, cyclophosphamide, doxorubicin, vincristine and prednisolone) regimen for eight standard courses, and achieved remission to a large extent. Follow-up results showed no recurrence and metastasis. Usually, PRL patients show improved outcome after the addition of rituximab to the CHOP regimen (8). 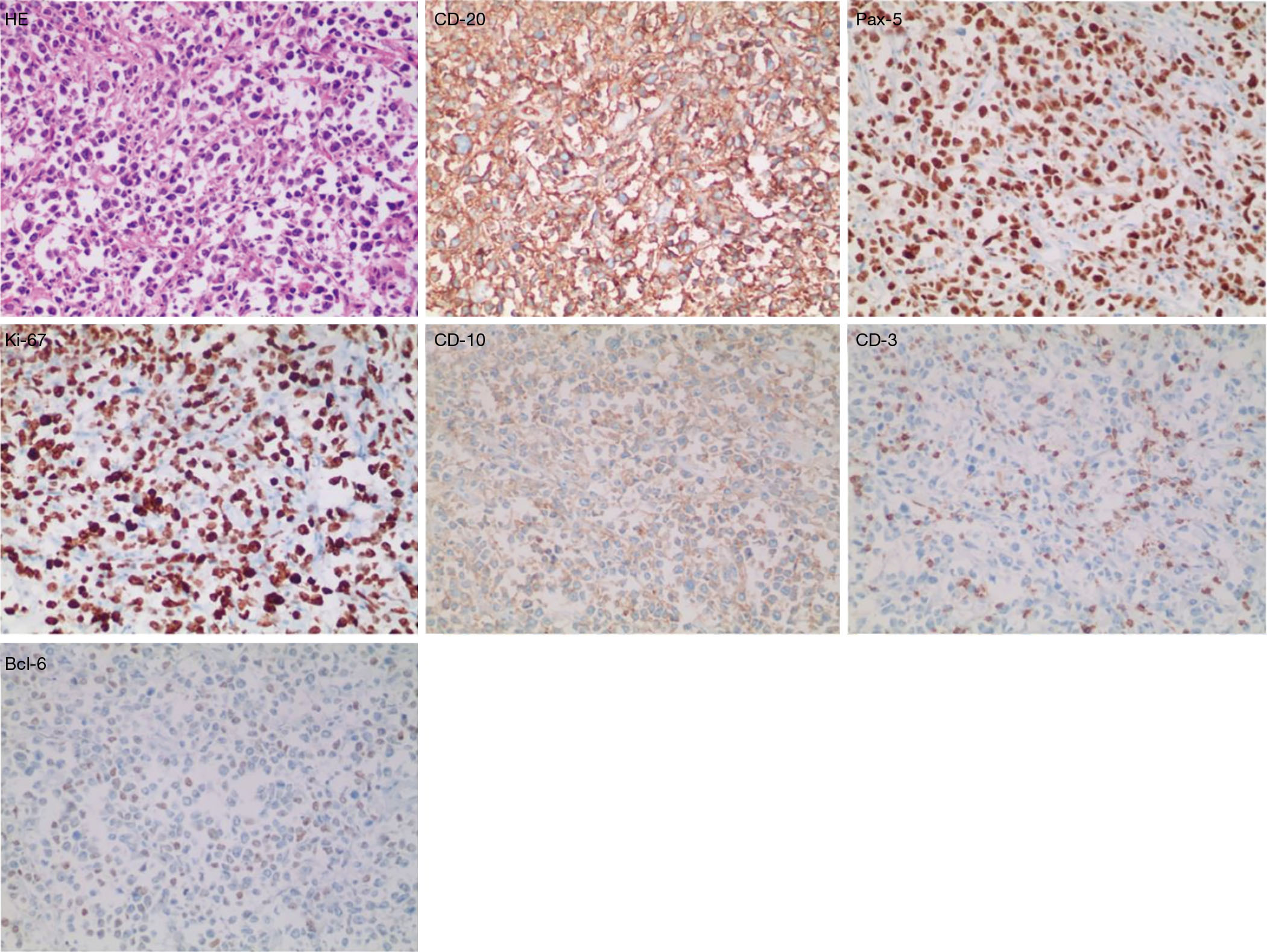 Figure 2 Immunohistochemistry staining of the resected right renal kidney. The antibodies used were as listed in the right below boxes of each representative graph (×200).

It is common for NHL to occur in the kidney. However, PRL is an argumentative and rare disease because the renal parenchyma lacks lymphatic vessels (7). Several cases have been reported in the literature, but consistent diagnostic criteria of PRL have not been established. Stallone et al. assessed 29 cases of PRL that satisfied the following three diagnostic criteria: (I) lymphoma renal infiltration; (II) non-obstructive single or bilateral kidney enlargement; (III) no extra renal localization at the time of diagnosis (9).

As shown in Table 1, a total of 46 cases of PRL (10-12) have been reported from 1990 until now. Among these cases, nearly 90% involved patients who were aged more than 50 years. The male-to-female ratio was about 2:1, indicating that this disease is more common in men. Additionally, the proportion of patients with unilateral renal involvement was higher than the proportion of patients with bilateral renal involvement. The most common histology type of PRL was DLBCL and the second most common was marginal zone lymphoma (MZL). The most common symptoms of PRL were pain and fever, and the condition of the majority of patients showed remission to some extent after chemotherapy. Compared with other urological tumors, PRL has some unique imaging features. Usually plain CT scan shows that primary renal DLBCL is homogeneous or slightly low-density lump, with unclear border. While enhanced CT shows mild enhancement, and the degree of enhancement is lower than that of normal renal parenchyma. In addition, PRL often lacks a blood supply and rarely invades the inferior vena cava as shown by CT. Moreover, the center of the PRL tumor is outside the renal collection system. These characteristics can help differentiate from other urologic tumors. 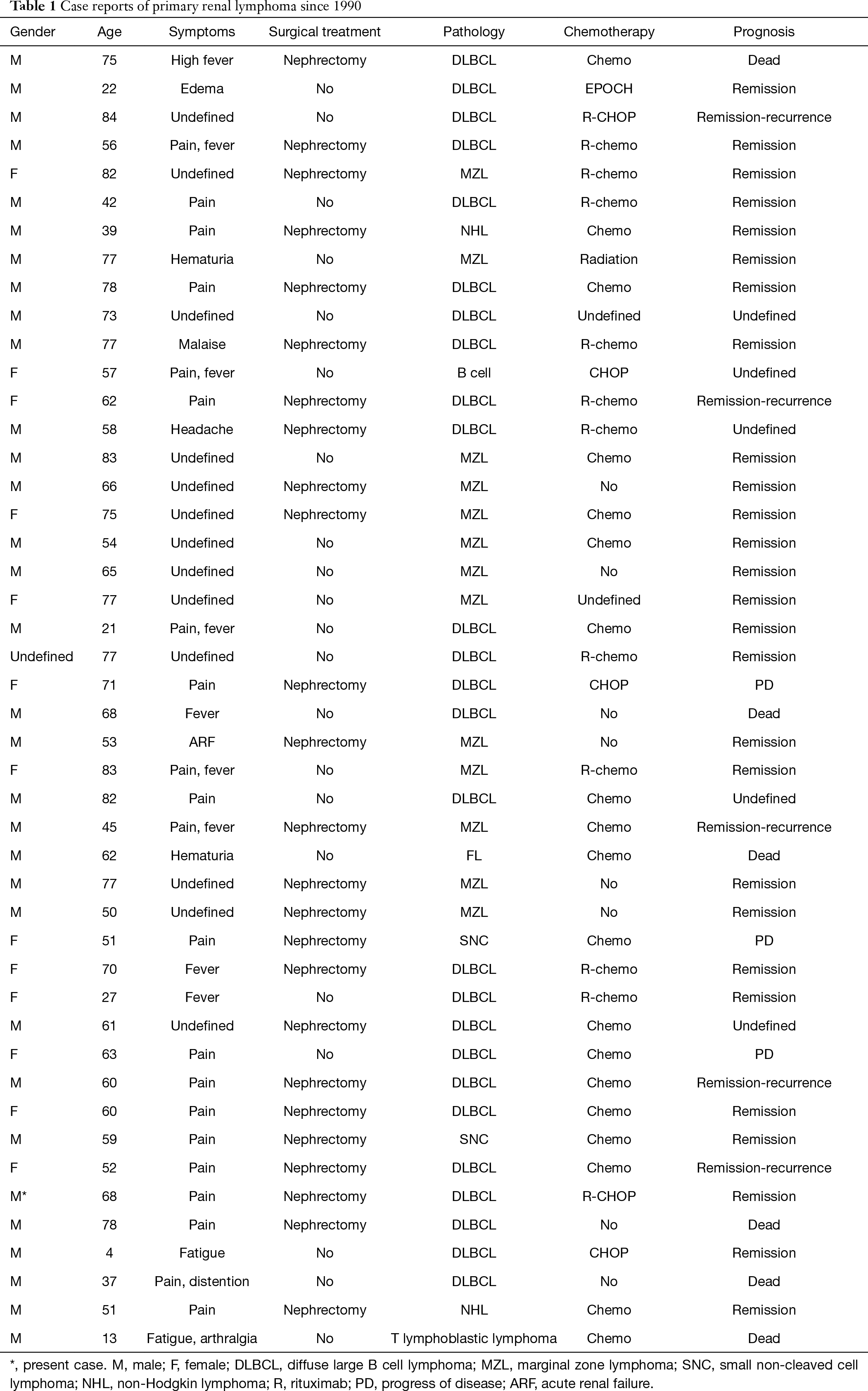 In 2008, Ladha et al. reported that a 62-year-old man who presented with right flank pain and a right renal mass on CT left against medical advice and underwent nephrectomy elsewhere. Histopathology revealed DLBCL. Although it is a rare disorder, overlooking PRL as one of the causes of a renal mass can lead to disseminated disease and unnecessary nephrectomy (5). In 2016, Fujizuka et al. reported that a 75-year-old man presenting with high fever and swelling of the left kidney was initially treated for severe pyelonephritis and the pathological diagnosis after left kidney nephrectomy was primary renal DLBCL (12). In view of the aggressive nature and poor prognosis of this condition, early diagnosis and timely treatment is essential. Currently, many examinations, including bone marrow biopsy, renal biopsy, immunohistochemistry, thoracoabdominal CT (9), and PET/CT (13), can help in the diagnosis of PRL. Although patients with PRL have poor prognosis, combined and intensive therapy, such as chemotherapy followed by radiation, may increase survival and improve quality of life (14). Patients who do not receive standard courses of chemotherapy or radiation treatment because of severe complications and other special circumstances may have limited disease free survival. In this case, we present a patient with a unilateral renal mass due to massive lymphomatous infiltration of the right kidney, which was diagnosed as primary renal diffuse large B-cell NHL according to postoperative pathological findings. Clinicians should try to ensure preoperative diagnosis and avoid unnecessary radical diagnostic nephrectomy, as patients with PRL can have a positive outcome after standardized and systematic chemotherapy.

We acknowledge our patient for providing informed consent for this case report.

Funding: This work is supported by a grant from Class A of Key Medical Talents in Jiangsu Province [ZDRCA2016009 (EO16)].

Conflicts of Interest: All authors have completed the ICMJE uniform disclosure form (available at http://dx.doi.org/10.21037/acr.2019.12.03). The authors have no conflicts of interest to declare.

Ethical Statement: The authors are accountable for all aspects of the work in ensuring that questions related to the accuracy or integrity of any part of the work are appropriately investigated and resolved. The study was approved by the Institutional Review Board of the First Affiliated Hospital of Nanjing Medical University. Written informed consent was obtained from the patient for publication of this case report and any accompanying images. A copy of the written consent is available for review by the Editor-in-Chief of this journal.