Infective endocarditis (IE) refers to infection of the endocardial surfaces of the heart by bacteria, viruses, or fungi, and is frequently associated with intravenous drug abuse or implanted cardiac devices and valves. Introducing a foreign body to a human cavity has its risks and serves as a nidus for infection, and as the use of intra-cardiac devices has increased in parallel to the growing incidence of heart disease, so has its complications. Although the clinical manifestations of IE are variable, classic presentation includes constitutional symptoms such as fever, chills, malaise and arthralgias, as well as new-found heart murmurs; however, there are situations in which alternate and less common signs and symptoms occur. The leading microbial cause of acute IE is Staphylococcus aureus, a potentially life-threatening opportunistic pathogen that does not easily cross the blood brain barrier. We present the unusual IE case with methicillin resistant Staphylococcus aureus (MRSA) which started as an infected pacemaker pocket and presented as neutrophilic meningoencephalitis.

A 53-year-old Caucasian woman presented to the Emergency Department with severe lower back pain, fever, and lethargy to a degree that hindered her ability to provide a complete history. Her vitals in the emergency department was temperature 101.8 F, tachycardia to 137, respirations of 20, blood pressure 138/84 mmHg and saturating 98% on room air. As her level of consciousness and respiratory effort both deteriorated, with GCS 7 (E1, V2, M4) the patient was intubated. A lumbar puncture was performed and a cerebrospinal fluid analysis revealed a white blood cell count of 470/cm2 with neutrophilic predominance (94%), protein of 162, and glucose of 77 mg/dL. A chest X-ray demonstrated pulmonary congestion and revealed an implanted pacemaker (Figure 1). Computed tomography of the brain and cervical, thoracic, and lumbar spines were all negative for acute pathology, and magnetic resonance imaging could not be obtained due to the patient’s non-compatible pacemaker and hip replacement hardware. 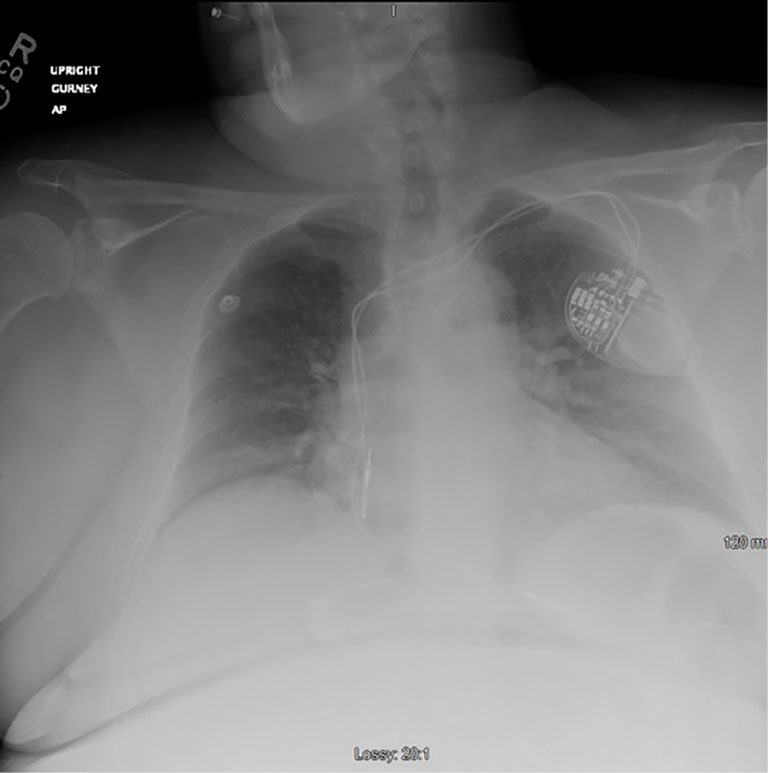 The patient was started on vancomycin and ceftriaxone empirically, and subsequent blood cultures isolated MRSA. Subsequently a transthoracic echocardiogram (TTE) was obtained that illustrated no evidence of a vegetation. After two days, the patient responded to treatment and was extubated, which allowed her to provide a better history. She claimed that she had a pocket site infection over her pacemaker with purulent discharge about two months prior, right after its placement. She took her daughter’s unspecified “antibiotics,” which resolved her symptoms with the exception of mild erythema at the pacemaker site.

Furthermore, a TEE was performed which showed a 0.8 cm × 0.3 cm echogenic mass on the atrial pacer lead suspicious for vegetation, with no additional defects (Figure 2). The patient was continued on vancomycin and was transferred to an outside hospital for pacemaker removal. After removal, CT angiography of the brain was performed for suspected mycotic aneurysm; however, no aneurysms were present. 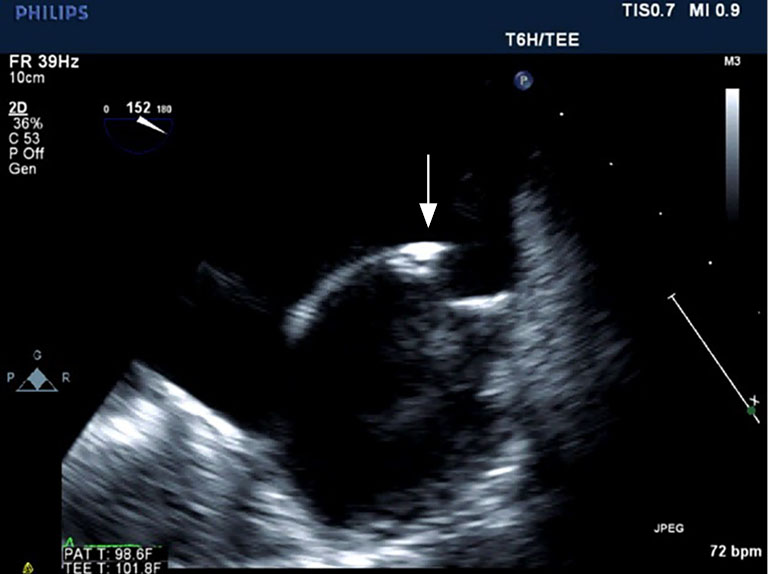 Figure 2 There is a pacemaker lead in the right ventricle. A 0.8 cm × 0.3 cm echogenic mass on atrial pacer lead suspect for vegetation (white arrow).

IE is a major cause of bacteremia following implantation of intracardiac devices and is associated with high rates of morbidity and mortality. The implantation of intracardiac device involves an insulated wire or lead that connects the device to the heart chambers, monitoring it’s electrical activity. It was this same connection that predisposed our patient to an increased risk of infection. With the patient’s development of “pus-pocket” at the site of her pacemaker, eluded to a possible bacterial infection that was allowed direct access to her heart via these connections.

Perhaps the most obscure aspect of the disease is its nonspecific presenting signs and symptoms. Although the modified Duke criteria has been developed to aid in the diagnosis of IE, the sensitivity is not very high for disease involving cardiac devices and prosthetic valves (1). The most common sign of IE is fever, occurring in up to 90 percent of patients, and is classified as one of the minor Duke criteria. Other manifestations, such as fatigue, headache, arthralgias and myalgias, are fairly vague and are seen in various additional disease processes. As such, IE may go unnoticed and untreated, which allows for it to spread and have more detrimental effects. When the bacteria remain in the patient’s bloodstream for extended periods of time, complications can arise that do not comply with the classic sequelae of IE.

An alarming presentation includes central nervous system involvement, which occurs in 20–40% of patients with IE (2), and is generally caused by embolization of endocardial vegetations. This includes complications such as embolic stroke, intracranial hemorrhage, and transient ischemic attack (2), which are all classified under the Duke minor criteria of “vascular phenomena.” Less common is the presentation of meningitis, which occurs in 2–20% of patients (2). This type of presentation is extremely rare, especially in patients with no evidence of vascular occlusion or hemorrhage on head CT. As with other causes of meningitis, a sustained bacterial load from IE translocates from the bloodstream to the central nervous system. Bacteria must penetrate the meninges to colonize cerebrospinal fluid, and each species has unique mechanisms of doing so. Staphylococcus aureus, the leading bacterial cause of acute IE, is able to cause endocardial vegetations via clumping factor, fibronectin-binding protein, and collagen-binding protein, all of which aid in adhesion to the extracellular matrix of cardiac cells (3). Similarly, although the definite mechanism by which Staphylococcus aureus crosses the blood brain barrier is not fully proven, animal models have shown that this adherence to the extracellular matrix is also responsible for the bacterium’s ability to cross the blood brain barrier and invade the host’s central nervous system (3).

MRSA IE secondary to an intracardiac device is a rare phenomenon, making diagnosis even more complicated with nonspecific symptoms. In addition, our patient presents with lethargy and hypoxemic respiratory failure secondary to neutrophilic meningoencephalitis, thereby necessitating further investigative testing including a lumbar puncture, chest X-ray, and a TTE. The life-threatening nature of this rare disease entity requires prompt evaluation and management with intubation, broad-spectrum antibiotics, and an investigation for the underlying etiology.