Melanoma is a highly malignant tumor derived from melanocytes, which occurs mostly in the skin, but also in mucous membranes and uveal (1). Mucosal melanoma accounts for less than 1.5% of all melanomas (2), with only 1% and 0.5% growing in stomach and esophagus in all non-cutaneous melanoma respectively. Primary mucosal malignant melanoma (PMMM) located in the gastroesophageal junction is even rarer, and up to 2020, there are only 7 similar cases (3). However, once rooted in the esophagus or gastrointestinal tract, the probability of occurrence is small but the possibility of metastasis becomes high (4-6). In a multicenter-retrospective research (7), 80% of patient (56/80) with primary malignant melanoma of esophagus (PMME) had postoperative recurrence or metastases and median disease-free survival (DFS) was only 5.9 months. Wang et al. (8) reviewed 76 PMME patients in 2019 and found that the overall median survival time was only 22.3 months. As the PMMM in gastroesophageal junction is lack of specificity of clinical symptoms, the early diagnosis is difficult. Moreover, PMMM is prone to hematolymphatic metastasis as well as insensitive to immunotherapy, which indicates poor therapeutic efficacy and remote outcome. Ishizaki et al. (9) reported a primary malignant melanoma of the esophagogastric junction: the patient was misinterpreted as undifferentiated carcinoma or malignant lymphoma preoperatively and died 11 months after the stomach operation due to multiple metastases. In another similar case (3), the patient died two months after hospital dismissal. Herein, we report a case of primary gastroesophageal junction melanoma with local lymph node metastasis in an elder Chinese woman. The patient received laparoscope assisted total gastrectomy without any adjuvant therapy but her recurrence-free survival time reached 36 months by the latest follow-up, which excelled the median recurrence-free survival time in the existing cases globally. We present the following case in accordance with the CARE reporting checklist (available at https://acr.amegroups.com/article/view/10.21037/acr-21-83/rc).

All procedures performed in this study were in accordance with the ethical standards of the institutional research committee and with the Helsinki Declaration (as revised in 2013). Written informed consent was obtained from the patient for publication of this case report and accompanying images. A copy of the written consent is available for review by the editorial office of this journal.

A 67-year-old female was admitted to hospital with “recurrent chest tightness for 2 years and chest pain for 15 days” on October 4, 2017. She did not complain about palpitation, shortness of breath, dysphagia and other discomforts. The patient denied skin injury and weight loss in the last 3 months. Physical examination showed a 10 mm × 3 mm nevus in the left inner thigh, but no obvious similar lesion was found in the skin in the rest of the body. Her nutritional status was not poor. No enlargement of superficial lymph nodes and mass was observed during the rectal examination.

After admission, blood cell counts showed no abnormality with a hemoglobin concentration of 13.1 g/dL and leukocyte count of 8×109/L. Tumor markers CEA and CA19-9 were also within the normal range. The albumin concentration (39.1 g/L) is slightly lower than the normal standard. Ultrasonography of cervical lymph nodes showed multiple lymph nodes in bilateral upper neck. Computerized tomography (CT) revealed thickening in the lower esophagus and the fundus of the stomach, with lymph node metastasis in the hepatic-gastric space (Figure 1A). Upper gastrointestinal examination by barium also showed stenosis of the lower esophagus and the fundus of the stomach, with mucosa destruction, irregular filling defect and peristalsis disappearance (Figure 1B). Gastroscopy showed a large malignant mass occupying the lower part of the esophagus and fundus of the stomach (Figure 1C,1D). Biopsy specimen immunohistochemical staining was as followed: HMB45 (+), S100 (+), MITF (+), VM (+) and CK (P) (−) (Figure 1E-1J). Based on the above results, the preliminary diagnosis was primary malignant melanoma. 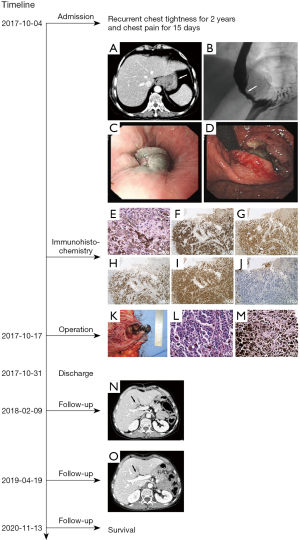 After exclusion of surgical contraindications, on October 17th, 2017, we performed laparoscope assisted total gastrectomy with D2 lymph node resection and Roux-en-Y anastomosis, and the nevus in left thigh was resected together. Intraoperatively, we observed that there was a hard black mass located in the lower esophagus and the cardia of stomach, with a diameter of about 4 cm (Figure 1K). Black enlarged lymph nodes could be observed at the lesser curvature of the stomach. No obvious neoplastic lesions were found in the rest of the abdominal cavity. Postoperative pathological examination indicated malignant melanoma. The tumor invaded serous membrane layer, as well as lymph node around the cardia (including 1+ on the group No. 2, 2+ on the group No. 1), without metastasis in upper and lower incision edge and the nevus is benign (Figure 1L,1M). On October 30th, 2017, the patient recovered well and discharged 13 days after the operation.

On February 9th, 2018, the CT examination suggested that a new nodule, about 11 mm × 15 mm in diameter, appeared in the left inner lobe of the liver and near the hepatic hilus (Figure 1N). We suspected that this nodule was a metastatic lesion. However, on April 19th, 2019, the CT examination did not present the nodule in the liver again (Figure 1O). On November 13th, 2020, the patient has no obvious discomfort complain and sign of tumor recurrence or metastasis through follow-up during 36 months after operation.

PMMM in upper gastrointestinal tract is an extremely rare malignant tumor. PMME is a rare esophageal cancer, which accounts for 0.1% to 0.2% of all primary esophageal malignancies (10,11). Mucosal melanoma takes up 0.03% of new gastric cancer diagnoses worldwide (12). The location of the PMME tends to be from the middle to lower third of esophagus (13). In upper gastrointestinal tract, PMMM has no specific symptoms compared to other primary tumors. The most chief complaints of patients include dysphagia, fatigue, abdominal or chest pain and weight loss (12,14). Similarly, radiological examination also does not have diagnostic specificity. CT is accurate for tumor assessment in size, degree of local invasion or regional lymph nodes metastasis (15). In upper gastrointestinal tract examination by barium contrast, a polyploid or segmented mass could presents stenosis or block of the lumen and peristalsis disappearance, while mucosa destruction presents irregular filling defect (16). The patient in our case was diagnosed through gastroscopy and pathological examination of biopsy samples. Commonly, the tumors under gastroscopy can vary in size and morphology, which typically present polypoid or lobulated with melanin pigmentation; sometimes are accompanied by ulcers and bleeding (17). It was reported that amelanotic lesions can account for 10% to 25% of all PMMEs, which may result in the misdiagnosis (18). In order to determine a further diagnosis, the biopsy and specimen’s pathological examination are usually performed. The tumor cells under microscope usually present irregular, spindle-shaped or epithelioid cell structures, hyperchromatic nuclei and cytoplasmic melanin granules (19). Correct diagnosis depends on the result of immunohistochemical stain: positive results of S100 protein, HMB45 and Melan-A and negative expression of CK (14).

For unresectable melanoma, immunotherapy may be promising as immune checkpoint inhibitors have been shown to improve the prognosis of advanced melanoma (20). Other adjuvant therapy, such as radiotherapy, chemotherapy, has been recommended in some studies, but still lacks systematic validations. Surgery is considered as a preferred option for resectable tumors. Radical surgical excision and lymph node dissection is beneficial for better clinical outcomes (21). We performed laparoscope assisted total gastrectomy with D2 lymph node resection in this case. The mass was resected completely and malignant cells can’t be found at upper or lower incision edge intraoperatively. PMMM in upper gastrointestinal tract possesses high invasiveness and poor prognosis because it is prone to hematogenous or lymphatic metastasis. The median survival time of PMMM in the stomach is only 5 months, while that of PMMM in the esophagus is 12 months (8,22). Actually, postoperative pathological results of this patient confirmed the serosal layer invasion and presence of local lymph node metastasis. Though not received any adjuvant therapy, the patient did not have tumor recurrence or metastasis during the 36-month follow-up. Laparoscopy has been used in the surgical treatment of gastric cancer for more than 20 years. Compared to traditional laparotomy, patients with laparoscopic surgery have less pain and faster recovery of gastrointestinal function. Due to the low incidence of PMMM of gastroesophageal junction, the literature related to laparoscopic surgery in this disease is rare presently. Patient in our case was treated by laparoscopic surgery and had a relatively better prognosis. These experiences could be referenced in clinical practice and the treatment in PMMM of gastroesophageal junction, but more studies are required to prove the advantages and benefits.

There are some limitations to our research. Firstly, we can’t judge exactly that the tumor originated at the junction of stomach and esophagus. It may be caused by downward invasion of esophageal melanoma. Secondly, we did not perform genetic sequencing analysis on the specimen, which could be beneficial to patient and related clinical research.

We would like to thank the pathologists for the guidance of the tissue section.

Reporting Checklist: The authors have completed the CARE reporting checklist. Available at https://acr.amegroups.com/article/view/10.21037/acr-21-83/rc

Conflicts of Interest: All authors have completed the ICMJE uniform disclosure form (available at https://acr.amegroups.com/article/view/10.21037/acr-21-83/coif). The authors have no conflicts of interest to declare.

Ethical Statement: The authors are accountable for all aspects of the work in ensuring that questions related to the accuracy or integrity of any part of the work are appropriately investigated and resolved. All procedures performed in this study were in accordance with the ethical standards of the institutional research committee and with the Helsinki Declaration (as revised in 2013). Written informed consent was obtained from the patient for publication of this case report and accompanying images. A copy of the written consent is available for review by the editorial office of this journal.