Rare malignant glomus tumor of the esophagus with pulmonary metastasis: a case report

Glomus tumors are typically benign neoplasms that arise from perivascular smooth muscle cells of the glomus apparatus, a physiologic arteriovenous shunt concentrated at nail beds that functions in thermoregulation. Given the tissue of origin, the majority of glomus tumors occurs in the periphery and comprises less than 2% of all soft tissue tumors. Visceral involvement is much less common, and has been sparingly described in the mediastinum, or the respiratory, gastrointestinal, and urinary tracts. To date, eleven primary glomus tumors involving the esophagus have been reported in literature, and only one has demonstrated distant metastasis. Here we present a unique case of malignant esophageal glomus tumor with pulmonary metastasis. We present the following case in accordance with the CARE reporting checklist (available at https://acr.amegroups.com/article/view/10.21037/acr-21-72/rc).

All procedures performed in this study were in accordance with the ethical standards of the institutional and/or national research committee(s) and with the Helsinki Declaration (as revised in 2013). Written informed consent was obtained from the patient for publication of this case report and accompanying images. A copy of the written consent is available for review by the editorial office of this journal.

A 57-year-old Hispanic woman presented with 3 weeks of progressive dysphagia and epigastric pain. At the time of presentation, the patient had developed complete intolerance of oral intake and 35-lb weight loss. Medical history was notable for type 2 diabetes mellitus and negative for tobacco or alcohol use. Physical exam was unremarkable. The patient underwent esophagogastroduodenoscopy (EGD) at an outside hospital days prior, which revealed a 5×3.5×2.5 cm vascular esophageal mass with significant blood in the stomach. Biopsy was deferred given concern for the vascular nature of the mass. Repeat upper endoscopy at our institution corroborated the finding of a large friable, necrotic mass with adherent clot in the mid-esophagus extending distally (Figure 1). Initial forceps biopsy was non-diagnostic, and EGD was repeated, with concurrent gastrojejunostomy-tube placement for bypass of the esophageal stricture and enteral feeding. Histology and immunohistochemical profile of the second specimen was suggestive of glomus tumor with round to spindled cells with central nuclei, moderate nuclear pleomorphism and areas with clearly defined cell borders; mitoses were not appreciated (1). By immunohistochemistry (IHC), the tumor was diffusely positive for smooth muscle antigen (SMA) (Figure 2) and negative for CAM5.2, CD34, CD99, CD117, desmin, DOG1, EBER, ERG, pankeratin, PU-1, S100; SDHB was retained (no loss of staining). Limited tissue precluded further analysis, and additional tissue sampling was recommended to achieve definitive diagnosis. The patient underwent a third EGD with staging EUS revealing full thickness involvement of the esophagus and a peri-esophageal lymph node with no invasion into other organs or vessels (Figure 3). Final pathologic diagnosis on third tissue sampling revealed a high-grade round to spindle cell neoplasm with similar features as the prior biopsy, however with areas of up to 15 mitoses in 3 HPFs, most consistent with a diagnosis of malignant glomus tumor (Figure 2). Contrast-enhanced CT highlighted the large esophageal tumor (5.0×3.5×2.5 cm) with associated distal stricture, as well as multiple, scattered sub-centimeter pulmonary nodules bilaterally, later confirmed on biopsy to be metastatic glomus tumor. There was no evidence of metastatic disease elsewhere, and no lesions showed FDG-avidity. Malignancy was ultimately staged at T3N1M1. She was later readmitted for recurrent anemia secondary to tumor bleeding requiring endoscopic intervention. Thoracic surgery was unable to offer localized resection due to the patient’s poor prognosis. After multidisciplinary review, the decision was made to pursue palliative radiation to the esophageal tumor while awaiting genomic testing for consideration of systemic therapy. The patient received intensity-modulated radiation therapy (IMRT) of 39 Gy in 13 fractions to the esophageal tumor, with significant palliation and no early toxicities. An initial next-generation sequencing (NGS) panel for sarcoma fusions revealed no abnormalities. Subsequent comprehensive NGS of the tumor revealed the following non-actionable variants: MIR143-NOTCH2 chromosomal arrangement (a rearrangement seen in more than half of all glomus tumors), loss of function BCORL1 p.S1395fs, copy number gains (AKT3, CKS1B, DDR2, ELF3, IKBKE, IL6R, MCL1, MDM4), and copy number losses (APC, CDKN2A, MTAP). Targeted ribonucleic acid (RNA) sequencing that did not include NOTCH2 did not reveal any other abnormalities. Mismatch repair proteins were present by IHC. The patient later developed numerous painful subcutaneous nodules (involving the scalp, neck, scapula, bilateral forearms, and thighs) suggestive of rapidly progressive systemic disease. Approximately 4 months after diagnosis, the patient entered hospice care for rapidly progressing and painful malignant glomus tumors. 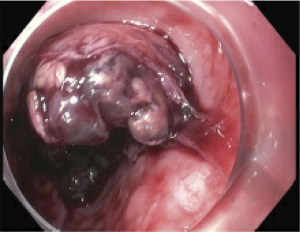 Figure 1 EGD showing a friable, intermittently bleeding, pedunculated, 25% circumferential mass measuring 2×3 cm at 32 cm from incisors along the right wall, involving all layers of the esophagus and proximal stomach with no invasion into other organ or vessels. EGD, esophagogastroduodenoscopy. 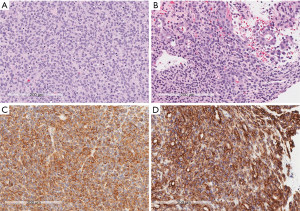 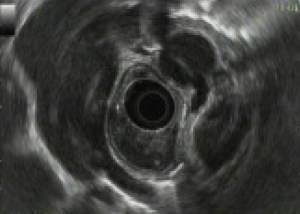 Gastrointestinal malignant glomus tumors are exceedingly uncommon, with metastatic progression described in two esophageal (2,3), eight gastric (4), and two small bowel (5,6) glomus tumors thus far. Given the rarity of disease incidence and scarcity of published reports, they represent a diagnostic and therapeutic challenge. Diagnosis of malignant glomus tumor is now aided by three criteria proposed by Folpe et al. (7): (I) tumor size >2.0 cm, (II) deep or visceral location, or (III) atypical mitotic figures, or marked atypia and mitotic activity ≥5 per 50 high power fields. Metastasis was present in 38% of glomus tumors deemed malignant by these criteria. Without biopsy, our patient already met two of three criteria for malignant glomus tumor on the basis of size and location alone, casting doubt on the probability of a benign tumor. Although the second tissue sample revealed low-grade proliferation with benign histologic features, the third uncovered a much higher grade morphology and was instrumental in appropriately designating the tumor as malignant. Additionally, in cases where determination of malignant potential is uncertain based on histology and IHC alone, molecular markers such as NOTCH gene fusions—in this case MIR143-NOTCH2-positivity—may further aid in the diagnosis. Agaram et al. (8) reported that a diagnosis of malignant glomus tumor was clinched in one-third of reviewed cases by molecular testing showing NOTCH gene rearrangements. Girard et al. (9) have similarly proposed CARMN-NOTCH2 gene fusion as a potential diagnostic biomarker of visceral glomus tumors based on its higher prevalence in glomus tumors of the upper digestive tract compared to of cutaneous tissue.

There are eleven published cases of glomus tumors originating in the esophagus (Table 1), but only two had both a malignant histopathological phenotype and regional or distant metastatic spread. Zhang et al. (2) described the first case in a 47-year-old man with regional lymph node involvement treated with surgical excision. By time of publication, there was no evidence of tumor recurrence at 11 months post-surgery. Seban et al. (3) presented a second case involving a 45-year-old man with FDG-avid malignant esophageal glomus tumor and aggressive multi-organ spread to the mediastinum, liver, scalp, and pelvic bones. The patient underwent excision of the subcutaneous nodule of his scalp, followed by doxorubicin and pelvic external beam radiation therapy (EBRT), which resulted in partial metabolic response in the lung by FDG-PET detection. Pazopanib was later introduced and achieved complete metabolic response of the liver and partial response for bone and mediastinum. It was discontinued after 3 months due to adverse effects. Off therapy, serial imaging demonstrated progressive disease. Subsequent treatment with regorafenib, cyclophosphamide and pelvic EBRT were ineffective and were poorly tolerated.

Whereas their benign counterparts generally promise a favorable prognosis when treated with local excision, malignant glomus tumors are clinically aggressive with much greater fatality. When surgical excision fails, attention turns to systemic therapies. There is limited data as to the efficacy of cytotoxic chemotherapy in malignant glomus tumors. Moreover, consideration of systemic therapy depends on the overall patient condition, which may often be prohibitive due to the burden of disease. One approach is to target the vascular nature of glomus tumors. Negahi et al. (4) have reported a case of resected oligometastatic glomus tumor of the lesser sac treated with six courses of adjuvant doxorubicin, bevacizumab and paclitaxel, followed by maintenance bevacizumab every 3 weeks and thrice daily propanolol. There was no evidence of primary tumor recurrence at 4-year follow-up.

In our patient’s case of biopsy-proven systemic disease with seemingly aggressive tempo, a trial of systemic therapy was considered. NGS has been wielded to tailor treatment strategies to individualized tumor mutations. According to one study, glomus tumors boast the highest tumor mutational burden of all soft-tissue sarcomas, with 16% of participants possessing treatment-linked alterations known to respond to an FDA-approved or study drug (19). Unfortunately, our patient’s tumor molecular profile did not generate any actionable targets and had a tumor mutational burden of 0.0 mutations/megabase with PD-L1 expression of 0% in both tumor cells and tumor-associated immune cells (Figure 4). A trial of gemcitabine and docetaxel was planned, but she experienced rapid clinical deterioration with progressive pain and weakness after a single dose of gemcitabine and elected to enter hospice care. 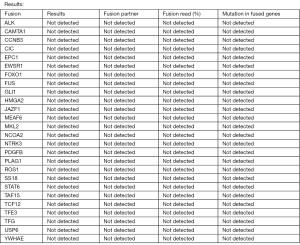 Figure 4 No evidence of expression of fusion RNA or mutation in any of the above genes by NGS. RNA, ribonucleic acid; NGS, next-generation sequencing.

Reporting Checklist: The authors have completed the CARE reporting checklist. Available at https://acr.amegroups.com/article/view/10.21037/acr-21-72/rc

Conflicts of Interest: All authors have completed the ICMJE uniform disclosure form (available at https://acr.amegroups.com/article/view/10.21037/acr-21-72/coif). The authors have no conflicts of interest to declare.

Ethical Statement: The authors are accountable for all aspects of the work in ensuring that questions related to the accuracy or integrity of any part of the work are appropriately investigated and resolved. All procedures performed in this study were in accordance with the ethical standards of the institutional and/or national research committee(s) and with the Helsinki Declaration (as revised in 2013). Written informed consent was obtained from the patient for publication of this case report and accompanying images. A copy of the written consent is available for review by the editorial office of this journal.