Hepatocellular carcinoma (HCC) is one of the top causes of cancer-related deaths in the world and has increased in incidence in the United States over the last several decades (1,2). Extra-hepatic metastases are found in 10–15% of patients at the time of diagnosis, with the most common locations being the lungs, intra-abdominal lymph nodes, and bone (3). Metastases to the adrenal glands are rare, representing approximately 10% of all metastases (4). In this report, we describe a case of a patient with primary right hepatic lobe HCC who was found to have an isolated left adrenal gland metastasis 2 years after primary resection. We present the following case in accordance with the CARE reporting checklist (available at https://acr.amegroups.com/article/view/10.21037/acr-21-75/rc).

In December 2015, an asymptomatic 60-year-old male with no alcohol use presented to his primary care doctor after being out of care for many years. Routine lab work demonstrated elevated liver function tests with positive hepatitis B and C. Imaging showed findings suggestive of early cirrhosis and a 5.5 cm LIRADS-5 mass in segment 7 of the liver with no evidence of metastatic disease (Figure 1). 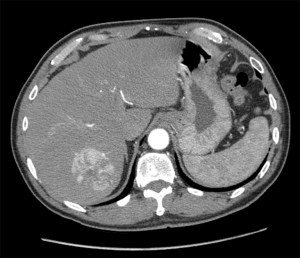 He underwent transarterial chemoembolization of the right hepatic artery in February 2016 while awaiting liver transplantation evaluation. At that time, his MELD score was 7, his alpha fetoprotein (AFP) was normal, and he had no laboratory findings to suggest cirrhosis. His tumor decreased in size, and the patient ultimately declined transplantation and pursued resection. He underwent partial hepatectomy with cholecystectomy in June 2016. Final pathology showed Stage IB (T1bN0M0) 6.5 cm grade 1 well differentiated HCC with no vascular invasion and clear margins. He completed sofosbuvir/velpatasvir 400–100 mg daily for 12 weeks post-operatively for chronic hepatitis C with resolution of disease and is currently on entecavir 0.5 mg daily since 2016 for chronic hepatitis B. His surveillance MRI 2 years later did not show any local recurrence, but demonstrated a 2 cm nodule in the left adrenal gland (Figure 2). 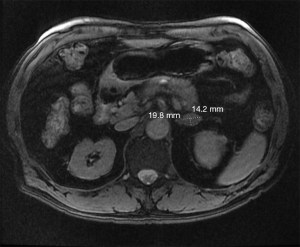 Resection was recommended, but the patient elected to observe with serial short term interval MRIs. The patient did not repeat his MRI until 14 months later, at which time the left adrenal gland nodule had increased to 4 cm (Figure 3). The patient underwent a laparoscopic left adrenalectomy in October 2019 with final pathology consistent with metastatic HCC with negative margins. Given complete resection of an isolated metastasis and no other evidence of metastatic disease, systemic therapy was not pursued. Surveillance MRI 21 months after adrenalectomy showed no evidence of recurrent disease in the adrenal gland or liver. All procedures performed in this study were in accordance with the ethical standards of the institutional and/or national research committee(s) and with the Helsinki Declaration (as revised in 2013). Written consent was not obtained from the patient or patient’s guardian/family for this case report. The Institutional Review Board of Kaiser Permanente Northern California does not require written consent for case reports. 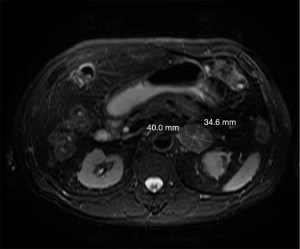 Microvascular invasion is considered the key factor affecting distant metastases of HCC (4). Although the initial pathology showed no evidence of any vascular invasion, there may have been some undetected within the specimen. There have been numerous other cases of metachronous ipsilateral adrenal metastasis (5-7), but isolated contralateral metachronous adrenal metastasis, such as was identified in this patient, is rare. Only a handful of cases have been reported (8-13). However, all but one case was from Asian countries. In addition, some patients were treated with transplantation or transarterial chemoembolization initially as opposed to hepatic resection. There was variety in the treatment modality for the adrenal metastasis as well including adrenalectomy, chemotherapy, radiation, or no treatment. Finally, the largest series reported disease recurrence of all 26 patients within 18 months of adrenalectomy contrasting to our patient who is more than 21 months without recurrence. A German retrospective study reported 10 patients having adrenal metastasis, but included patients treated with transplantation and did not specify if there were any intra-hepatic or extra-hepatic concurrent recurrences (14). There are no current guidelines detailing how to treat adrenal metastases of HCC. However, studies have shown that treatment of the metastasis by adrenalectomy resulted in statistically increased survival compared to that of patients treated with chemoradiation, local ablation, or surveillance only (13). As evidenced by this patient, he is almost 2 years after his resection without recurrence despite having had a delay in his surgery. Follow up surveillance with imaging and AFP level is essential with standard practice being every 3–6 months for the first 2 years followed by every 6–12 months thereafter.

Adrenal metastases have been identified after partial liver resections and transplantation. The two scenarios likely need to be approached differently. The post-transplant patients may have a second primary tumor in the new liver caused by the patient’s underlying risk factors such as pre-existing hepatitis whereas the post-resection patients could possibly receive curative systemic treatment if there is a high suspicion of occult microvascular invasion. At present, chemoradiation is reserved for those HCCs that are unresectable or metastatic on presentation with adjuvant systemic therapy not a standard of care.

One of the strengths of this case report is the availability of all clinical information including labs and imaging across multiple disciplines and institutions within one integrated health care system. Limitations include limited follow up of 21 months after the patient’s most recent operation.

In this study, we describe one of the few cases in the United States of a patient with primary HCC who underwent liver resection and was subsequently found to have an isolated metachronous contralateral adrenal metastasis. Further research is needed to investigate the optimal way of treating isolated extra-hepatic metastases in addition to targeted systemic therapies.

We would like to thank UCSF East Bay, Kaiser Permanente Oakland Medical Center, and particularly Dr. Chang, for their support and dedication to our education and training.

Reporting Checklist: The authors have completed the CARE reporting checklist. Available at https://acr.amegroups.com/article/view/10.21037/acr-21-75/rc

Conflicts of Interest: All authors have completed the ICMJE uniform disclosure form (available at https://acr.amegroups.com/article/view/10.21037/acr-21-75/coif). The authors have no conflicts of interest to declare.

Ethical Statement: The authors are accountable for all aspects of the work in ensuring that questions related to the accuracy or integrity of any part of the work are appropriately investigated and resolved. All procedures performed in this study were in accordance with the ethical standards of the institutional and/or national research committee(s) and with the Helsinki Declaration (as revised in 2013). Written consent was not obtained from the patient or patient’s guardian/family for this case report. The Institutional Review Board of Kaiser Permanente Northern California does not require written consent for case reports.