Electrical status epilepticus during sleep in a child with Prader-Willi syndrome: a case report

Electrical status epilepticus in sleep (ESES) is an age-related and self-limited epileptic encephalopathy that presents with seizures, neurocognitive delay and a characteristic electroencephalogram (EEG) (1). Causes of ESES range from immune disorders, brain anatomical defects to genetic etiologies (1,2). Meanwhile, Prader-Willi syndrome (PWS) is a complex and multisystem disorder with a wide-ranging clinical presentations including delayed psychomotor development, early onset obesity, short stature, hypogonadism, emotional problems and behavioral abnormalities (3). Patients with PWS has been shown to have an increased risk of sleeping disorders and seizures (4,5). Here, we describe a PWS patient who was diagnosed with ESES.

We present the following case in accordance with the CARE reporting checklist (available at https://dx.doi.org/10.21037/acr-21-34).

All procedures performed in studies involving human participants were in accordance with the ethical standards of the Western Michigan University School of Medicine institutional research committee and with the Helsinki Declaration (as revised in 2013). Written informed consent was obtained from the patient’s parent or legal guardian for publication of this case report and accompanying images. A copy of the written consent is available for review by the editorial office of this journal.

A 5-year-old girl with a known diagnosis of PWS was referred to the pediatric pulmonology clinic before initiation of growth hormone (GH) therapy. Her neonatal course was complicated by poor muscle tone and feeding difficulties that required a gastrotomy tube (G-tube) placement at 6 weeks of age. She was subsequently diagnosed with PWS at 8 weeks old. Genetic evaluation for her PWS was not available for review. She was started on daily GH therapy at 3 months of age. At that time, she had undergone a diagnostic overnight polysomnography (OPSG) that was unremarkable. Subsequently, patient did not follow-up with a pediatric pulmonologist. At 5 years and 7 months of age, her GH was stopped by parents. Prior to re-initiating her GH, patient was sent to be evaluated by a pediatric pulmonologist. During her pulmonology clinic visit, the mother reported a good appetite in the patient and the G-tube has since been removed. Mother denied any symptoms suggestive of sleep disordered breathing (SDB) and stated that the child occasionally used high frequency chest wall oscillation therapy for airway clearance during respiratory infections. She also noted that the child was unusually restless throughout the day. Her physical exam revealed a thin, anxious, but developmentally appropriate girl with a BMI at the 15th percentile. She was noted to wear glasses for strabismus. Her nasal turbinates were unremarkable, and her tonsil size was 2+. A gross neurologic exam was unremarkable. A diagnostic OPSG was performed with a 6-channel EEG that showed a prolonged sleep onset latency to 74 minutes, sleep efficiency of 82% and normal sleep architecture for her age. There was no snoring, but a few respiratory events including a single central apnea and 4 hypopneas. Oxygenation and ventilation were normal. Unexpectedly, the child’s EEG showed abnormal electrical activity throughout the study, although there was no unusual movement or clinical seizure. As seen in Figure 1, her awake EEG was normal. However, as soon as she entered N1 sleep, the EEG started recording bilateral, continuous slow, 2–3 Hz, diffuse spike and wave discharges that continued in to N2 and N3 sleep occupying almost 100% of the epochs (Figure 2). In REM sleep, however, the waveforms were mostly normal (Figure 3). By consulting with a pediatric neurologist, the findings in the OPSG were indicative of ESES. The patient followed up with a local neurologist. A 24-hour EEG was done and confirmed the diagnosis of ESES. However, she was subsequently lost to follow-up. Therefore, no treatment was started and no other OPSG were performed. 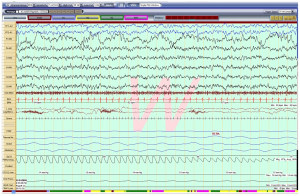 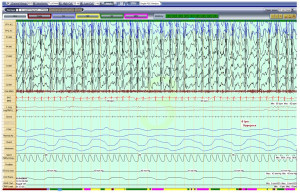 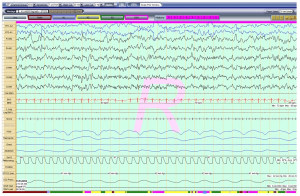 PWS is a complex and multisystem disorder occurring as the result of absence of expression of paternal genes from chromosome 15q11.2-q13 (6). The incidence of PWS remains a topic of investigation, and recent data from several studied population indicates a range of 1/10,000–1/30,000 (6,7). Clinically, PWS patients exhibit severe neonatal hypotonia, feeding difficulties in early infancy, followed by hyperphagia with evolving obesity in later years (6,8). All individuals with PWS have cognitive disability, ranging from mild to severe (6). Characteristic behavioral traits among PWS patients consist of temper tantrums, compulsive behaviors, and especially stubbornness (6). Driven by a deficiency in GH, short stature is common (9). DNA methylation analysis within the Prader-Willi critical region is the most reliable first-line genetic test (7). Prompt recognition and accurate testing leads to earlier treatment and improve the long-term health for patients with PWS (7).

Further, it is important to point out that sleep abnormalities are well documented in PWS. These include abnormal circadian rhythm of rapid eye movement (REM) sleep with reduced REM latency, abnormal arousal, and altered sleep architecture (6,10). Overall, individuals with PWS have a high incidence of both central and obstructive sleep apnea, between 50–100% (10). As a result, it is recommended that a sleep study be performed before initiation of GH therapy to assess for and treat obstructive apnea (6-8). This was the case for our patient as an OPSG was performed prior to the start of her first and second GH therapy.

With a growing understanding of PWS, we have recognized an increased risk of seizures in these patients. In a review of 56 patients with PWS, Fan et al. showed that nine had a diagnosis of seizure disorder. The authors measured a frequency of generalized seizure disorder in their patients at 16%, almost three-fold the upper-limit of 6% in the general pediatric population (4). When they combined their cases with 6 previous studies, they found that 119 out of 455 PWS patients were diagnosed with seizures, for a prevalence of 26% (4). In a retrospective investigation in Japan, Takeshita et al. analyzed 142 patients with PWS and identified 31 (22%) with seizures (11). In a comprehensive review of epilepsy in PWS patients, the types of seizure include focal epilepsy being the most common, generalized tonic-clonic seizures, complex partial seizures, atypical absence, staring spells, and myoclonic, tonic and hemiclonic seizures (3). While the frequency of epilepsy is higher in PWS patients than in general populations, the overall prognosis is favorable as anticonvulsants monotherapy provide good response.

ESES is an age-related, self-limited epileptiform abnormalities (1,2). ESES was first described in 1971 when Patry et al. reported an EEG pattern of continuous spikes and waves during slow-wave sleep in six children (12). As a result, ESES is often used interchangeably with continuous spike-wave of slow sleep in the literature. Overall, ESES is characterized by severe EEG disturbance occupying at least 85% of sleep, epilepsy with different seizure types, behavioral deterioration and motor impairment (13,14). It is a rare condition with an estimated prevalence of 0.5–0.6% in pediatric epilepsy (1). From the clinical standpoint, seizures are the presenting symptom in the majority of the cases. They occur between the age of 3 and 5, and remit spontaneously around puberty (1). The classic EEG pattern of ESES also disappears around the age of 11 years. In conjunction with the resolution of seizures and EEG findings, patients can exhibit neurocognitive and behavioral improvement. Treatment for ESES include antiepileptic drugs, steroids, adrenocorticotropic hormone, intravenous immunoglobulin and surgery in specific cases. However, long-term outcome of ESES remains highly variable and depends on the etiology and the duration of ESES (15). Etiology of ESES varies from brain structural defects, immune disorders to genetic causes (1,2). ESES is also thought to be related to other epilepsy syndromes: benign epilepsy of childhood with centrotemporal spikes and benign occipital epilepsy of childhood (1,15).

To our knowledge, ESES has never been reported in patients with PWS. Our case is unique as clinical presentations were subtle (anxiety and restlessness) and the patient did not have any known seizures. Typically, the onset of seizures prompt further evaluation including EEG and epileptiform discharges appear as soon as the patient falls asleep and persist throughout non-REM sleep. It is possible, however, that mild seizure episodes such as staring or abnormal movements may have been missed by the family. There was no overt concern about cognitive regression, although objective measurements were not performed to assess cognitive and behavioral status of this patient. Further, ESES is not a well-known condition by pediatric sleep specialists, who may be the first providers encountering this very typical EEG pattern during the OPSG recording. Since timely diagnosis and early treatment of ESES is very important to prevent neurocognitive decline, we are hoping that our case may raise awareness of this condition.

The authors thanks Ana Curta, MD for data collection for the manuscript.

Reporting Checklist: The authors have completed the CARE reporting checklist. Available at https://dx.doi.org/10.21037/acr-21-34

Conflicts of Interest: All authors have completed the ICMJE uniform disclosure form (available at https://dx.doi.org/10.21037/acr-21-34). The authors have no conflicts of interest to declare.

Ethical Statement: The authors are accountable for all aspects of the work in ensuring that questions related to the accuracy or integrity of any part of the work are appropriately investigated and resolved. All procedures performed in studies involving human participants were in accordance with the ethical standards of the Western Michigan University School of Medicine institutional research committee and with the Helsinki Declaration (as revised in 2013). Written informed consent was obtained from the patient’s parent or legal guardian for publication of this case report and accompanying images. A copy of the written consent is available for review by the editorial office of this journal.