Rapid development and rupture of a pneumatocele caused by pulmonary dissection in the early postoperative period of lung resection: a case report

Air leakage is usually caused by direct injury to the lung parenchyma, and prolonged air leakage over 7 days affects nearly 5% of patients who undergo lobectomy for lung cancer (1). Herein we report a case in which a pneumatocele developed rapidly in the right middle lobe and ruptured 16 days after right upper lobectomy for lung cancer. A few groups, including us, have reported a case of a rapidly developed and ruptured pneumatocele after pulmonary resection (2-5). However, the mechanism underlying a rapidly-developing pneumatocele is poorly understood because of its rarity. In the present case, we assessed the pathological findings of rapidly developing pneumatocele after lung resection. In line with a previous report (2), our findings support that this type of pneumatocele is caused by dissection in subpleural pulmonary parenchyma by overinflation of residual lung.

We present the following article in accordance with the CARE reporting checklist (available at https://dx.doi.org/10.21037/acr-21-37).

A 73-year-old man who had received wedge resection for lung adenocarcinoma (pT1miN0M0 Stage IA1) 5 years before the presentation was diagnosed with small cell lung cancer (SCLC) in the right upper lobe (cT1bN0M0 Stage IA2). His medical history included malignant lymphoma of the left axillary lymph node treated with radiotherapy and rituximab. He was treated with etanercept for rheumatoid arthritis (RA), tiotropium bromide hydrate for combined pulmonary fibrosis and emphysema, and type 2 diabetes mellitus (HbA1c: 6.0%) without any medication, respectively, and all of which were under control. The patient had a 67 pack/year smoking history. Computed tomography (CT) scan revealed a 1.8 cm lung nodule in the right upper lobe and emphysema mainly in the bilateral upper lobes as well as interstitial shadow in the bilateral lower lobes. No pulmonary cysts were found in the right middle lobe. In addition, a CT scan also revealed small nodules in the thymus, which were suspected as thymic hyperplasia. However, the differential diagnosis was metastatic lymph nodes of SCLC. Partial thymectomy and right upper lobectomy with ND2a-2 was performed via complete video-assisted thoracic surgery (cVATS) approach since intraoperative frozen section diagnosis showed no metastasis of the SCLC in thymic nodules. After expanding the interlobar spaces, they were secured by compression technique without grasping them using tweezers as previously described (3). His major fissure is well separated, while minor fissure is not well lobulated. Therefore interlobes between the upper and lower lobe were separated using electrocautery, while interlobes between the upper and middle lobe were separated using a surgical stapler. The interlobes were covered with fibrin glue since the visceral pleura was missing around the right interlobar pulmonary artery, although the sealing test before closing the chest showed no air leakage. A pulmonary cyst was not found around the right middle lobe. Although mild air leakage was observed postoperatively, it disappeared on postoperative day (POD) 1, and the thoracic catheter (20 Fr) was removed on POD 3. Dyspnea appeared on POD 11, and a chest CT scan showed a localized infiltrative shadow in the right lower lobe. No large bullae were seen in the right middle lobe (Figure 1A-1C). He was diagnosed with eosinophilic pneumonia based on increased eosinophils in bronchoalveolar lavage on POD 13. One possible cause of eosinophilic pneumonia was fibrin glue since the infiltrative shadow was localized on the surgical side of the lung. Oral corticosteroid therapy (prednisolone 30 mg/day) improved both dyspnea and infiltrative shadow. However, severe dyspnea suddenly re-developed soon after defecation on POD 16. Chest drainage was performed immediately because chest X-ray revealed pneumothorax and extensive subcutaneous emphysema. Chest CT scan showed a newly developed pneumatocele in the right middle lobe (Figure 1D-1F) on POD 17. Reoperation was performed via the cVATS approach for pneumothorax on POD 20, and a broad-based cyst with a thick wall was seen in the interlobar surface of the middle lobe (Figure 2A). Blood clots were detected inside the new cyst, and lung parenchyma was exposed as a bottom of the bulla (Figure 2B). After removing the blood clots, polyglycolic acid (PGA) sheets soaked with 40% glucose solution instead of fibrin glue were applied inside the cyst, and the cyst wall was sutured together with the pulmonary parenchyma (Figure 2C) and covered with PGA sheets. Although a small amount of air leakage was observed after the surgery, it disappeared by conservative treatment. The chest tube was removed on POD 31/post-reoperative day (PrOD) 11. Pathological findings showed that the cyst wall consisted of visceral pleura with thinly binding thyroid transcription factor 1 (TTF-1) positive alveolar epithelial cells (Figure 3A-3D), suggesting that this bulla was induced by lung dissection at subpleural lung parenchyma. The patient’s condition was additionally complicated by herpes zoster on POD 42/PrOD 22, and he was discharged from our hospital on POD 50/PrOD 30 after all complications improved. No new pulmonary cysts developed 3 months after the reoperation. 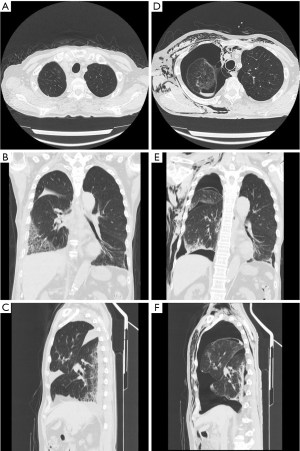 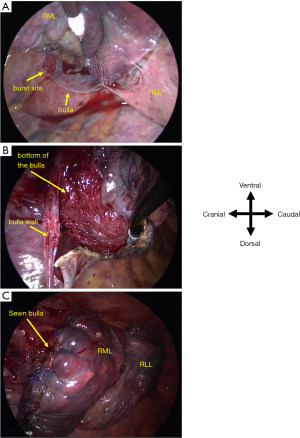 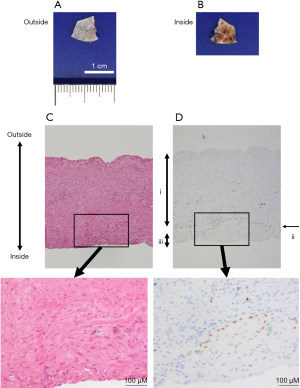 Figure 3 Pathological findings of the bulla wall. (A) Outside of the bulla wall: The bulla wall was thick and non-transparent; (B) inside of the bulla wall was contaminated with blood clots; (C) hematoxylin-eosin staining showed thickened visceral pleura with proliferation of fibroblast-like spindle cells and fine collagen fibers (i); (D) immunohistochemistry for TTF-1 showed TTF-1 positive alveolar epithelial cells (ii) were seen inside the visceral pleura. Inside the TTF-1 positive alveolar epithelial cells, lung parenchyma was organized (iii). TTF-1, thyroid transcription factor 1.

All procedures performed in studies involving human participants were in accordance with the ethical standards of the institutional and national research committees and with the Helsinki Declaration (as revised in 2013). Ethical approval was not required for this study because case reports are exempt from ethical approval in Ethical Guidelines for Medical and Health Research Involving Human Subjects from Ministry of Health, Labour, and Welfare in Japan. Written informed consent was obtained from the patient for publication of this case report and accompanying images. A copy of the written consent is available for review by the editorial office of this journal.

Rapidly developing pneumatocele in the early postoperative period is a very rare complication (2-5). Most of the reported pneumatoceles appeared within a month after the previous lung resection, except in one case where it appeared 9 months after the lung resection (5). Although the wall of slow-growing bulla, whose possible formation mechanism is air trapped in alveoli (6), is generally thin, trabecula-like structures are seen inside bullae (7). The cyst wall was very thick in the present case, and blood clots were seen inside the bulla. Histologically, the bulla wall consisted of visceral pleura with TTF-1 positive alveolar epithelial cells, supporting a previously proposed hypothesis: rapidly developed pneumatocele after lung resection is formed by dissection at subpleural pulmonary parenchyma via over-inflation of residual lung if pulmonary parenchyma is fragile due to emphysema (2).

In the present case, pneumothorax-induced dyspnea developed suddenly after the patient defecated. COPD tends to be complicated with constipation (10), which must have been the case in the present patient. It was reported that maximal expiratory pressure in elderly males reached 90 to 256 cmH2O (11). Although there is no study evaluating airway pressure during defecation in healthy volunteers, a previous study showed lower thoracic spinal cord stimulation system to induce defecation enhanced airway pressure around 146 cmH2O in patients with spinal cord injury (12). These findings suggest that defecation can raise airway pressure.

It is unclear how the condition can be prevented because we could not prevent this complication regardless of setting the suction pressure less than 5 cmH2O to avoid overinflation of the residual lung in the present case based on a previous experiment (3). Based on the findings from the present case, we recommend that clinicians should consider managing constipation after lung resection and avoid steroid use if possible.

Reporting Checklist: The authors have completed the CARE reporting checklist. Available at https://dx.doi.org/10.21037/acr-21-37

Conflicts of Interest: All authors have completed the ICMJE uniform disclosure form (available at https://dx.doi.org/10.21037/acr-21-37). The authors have no conflicts of interest to declare.

Ethical Statement: The authors are accountable for all aspects of the work in ensuring that questions related to the accuracy or integrity of any part of the work are appropriately investigated and resolved. All procedures performed in studies involving human participants were in accordance with the ethical standards of the institutional and national research committees and with the Helsinki Declaration (as revised in 2013). Ethical approval was not required for this study because case reports are exempt from ethical approval in Ethical Guidelines for Medical and Health Research Involving Human Subjects from Ministry of Health, Labour, and Welfare in Japan. Written informed consent was obtained from the patient for publication of this case report and accompanying images. A copy of the written consent is available for review by the editorial office of this journal.