Eighteen-year-old man with syncope with Helicobacter pylori as the culprit: a case report

Helicobacter pylori (H. pylori) is estimated to have infected more than two thirds of people living in resource-limited countries and approximately one third of those living in industrialized countries (1). The majority of patients infected with H. pylori are asymptomatic. In children, H. pylori infection can result in gastroduodenal inflammation and manifest as epigastric pain, nausea, vomiting and gastrointestinal (GI) bleeding. Extra-intestinal manifestations can include iron-deficiency anemia (IDA), short stature and chronic immune thrombocytopenia (2). In this report, we present an 18-year-old man with syncope as a result of H. pylori gastritis and subsequent GI bleeding and weight loss.

We present the following article in accordance with the CARE reporting checklist (available at https://dx.doi.org/10.21037/acr-21-41).

All procedures performed in studies involving human participants were in accordance with the ethical standards of the Western Michigan University School of Medicine institutional research committee and with the Helsinki Declaration (as revised in 2013). Written informed consent was obtained from the patient for publication of this case report and accompanying images. A copy of the written consent is available for review by the editorial office of this journal.

An 18-year-old man with no significant past medical history presented to the emergency department (ED) after a syncopal event. The incident occurred after the patient climbed three flights of stairs, entered his home and was witnessed slumping against the wall and falling to the floor. Patient lost consciousness for a few seconds during which no abnormal movements were noted. On awakening, patient reported feeling fatigued and had one episode of non-bloody, non-bilious emesis. He denied any preceding chest pain, palpitations, diaphoresis or shortness of breath. He also denied preceding dizziness, weakness, blurry vision, nausea or aura. Leading up to the event, there had been no excessive physical exertion, prolonged standing, or abrupt positional changes. Review of systems was notable for a three-year history of weight loss and abdominal pain associated with eating. He described the pain as “gnawing”, located in the epigastric area, and non-radiating in nature. The pain was initially intermittent, occurring every 2–4 weeks, and increasing to multiple times daily over the past month. No particular dietary trigger was identified. The pain was worse a few hours after food consumption. He also had loss of appetite and a 10-pound weight loss during the last month. He denied any history of alcohol, tobacco or illicit drug use. There was no family history of cardiomyopathies, arrhythmias, sudden death or seizures. The patient was an athlete who was an active member of his varsity football and basketball teams, and he reported no decrease in his effort or tolerance.

On physical exam, he had a heart rate of 104 beats per minute, respiratory rate of 16 breaths per minute, blood pressure of 102/61 mmHg with no orthostatic drop, temperature of 98.3 °F and oxygen saturation of 99% on room air. His body mass index was 24 kg/m2. Growth chart review indicated a significant drop in weight, from 178 pounds to 119 pounds in a 4-year span (Figure 1). He was not in any acute distress. He was alert without signs of head or tongue injury. Cardiac exam demonstrated normal pulses, rate and regular rhythm. No extra heart sounds or murmur were auscultated. Pulmonary exam was normal. His abdomen was soft with no tenderness or organomegaly. No hemorrhoids or masses were appreciated on rectal exam. A full neurologic examination including fundoscopy were normal. 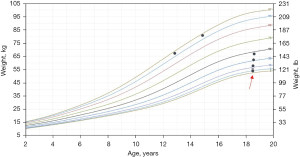 Figure 1 The patient’s growth chart demonstrates a noticeable decline in weight for a four-year span. The red arrow indicates his weight at the emergency department visit. He has gained weight since the treatment of his H. pylori gastritis. H. pylori, Helicobacter pylori.

An EKG revealed normal sinus rhythm without any T wave, ST segment, axis or interval abnormality. Complete blood count showed a hemoglobin (Hgb) of 8.8 g/dL (reference range, 13.5–17.5 g/dL), and a mean corpuscular volume of 67.1 fL (reference range, 80–99 fL). Iron studies showed a ferritin level of 2 ng/mL (reference range, 30–400 ng/mL), and iron saturation of 2% (reference rage, 20–55%). A diagnosis of IDA was made. Basic metabolic panel revealed a blood urea nitrogen (BUN) of 33 mg/dL (reference range, 6–20 mg/dL), and a creatinine of 0.74 mg/dL (reference range, 0.7–1.3 mg/dL) giving a BUN/creatinine ratio of 45 (reference range, 6–20) which is suggestive of an upper GI bleed (3). Stool guaiac test was positive. Upon further enquiry, the patients father revealed that the patient had mentioned intermittent dark stools within the last month. This was supportive of the diagnosis of IDA secondary to an upper GI bleed. A subsequent endoscopic gastroduodenoscopy found diffuse mucosal congestion in the stomach, and one small, roughly 8 mm, clean-based non-bleeding ulcer in the proximal duodenum (Figure 2). Biopsies from the stomach demonstrated chronic active gastritis with bacterial forms consistent with H. pylori (Figure 3). He was started on triple therapy with a proton-pump inhibitor (PPI), amoxicillin and clarithromycin for 14 days. His symptoms abated within days of treatment. His repeat Hgb levels was 10.6 g/dL at the 2-week follow up visit. He reported resolution of his symptoms at the conclusion of his therapy and evidence of improved weight gain. He remains on PPI therapy with a planned eradication test at the time of this report.

Figure 2 Jeny(A,B) Demonstrate diffuse mucosal congestion in the stomach region. No abnormalities seen in the esophagus. No ulcer in the stomach. Random gastric biopsies were obtained to rule out H. pylori. H. pylori, Helicobacter pylori. 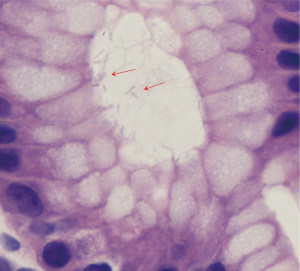 H. pylori is amongst the most common chronic bacterial infection in humans with more than half of the global population estimated to be infected (4). Pediatric patients appear to differ from their adult counterparts in terms of the prevalence, the complication rate, and the rate of antibiotic resistance (4-6). In Iran, a recent meta-analysis found the prevalence of H. pylori infection in both children and adults to be 54%, with most infections acquired in childhood (7). A number of risk factors for acquisition have been documented, including domestic overcrowding, childcare attendance, and poor socioeconomic and hygiene conditions (2,6). Once acquired, infection persists and causes gastritis and duodenitis at the histologic level. In children and adolescents, questions remain about the clinical consequences of the infection. The evidence in favor of H. pylori infection causing duodenal ulceration is clear, although less certain in the case of gastric ulcers (2). There is a lack of robust evidence linking H. pylori infection to dyspepsia without documented peptic ulcer disease (PUD) (unlike adults), unspecified abdominal pain and recurrent abdominal pain (1,2,8). The indication for diagnostic testing for H. pylori infection should therefore be carefully considered to avoid detecting asymptomatic colonization and unnecessary antibiotic treatment.

The American Academy of Pediatrics recommends testing only when treatment for H. pylori infection would be warranted (1,9). Such candidates include patients who have either active PUD or a history of ulcers, or more rarely, children who have mucosa-associated lymphoid tissue (MALT)-type lymphoma or gastric cancer. The Joint ESPGHAN/NASPGHAN Guidelines in 2016 state that endoscopy along with biopsies for rapid urease test and culture are the gold standard for diagnosis of H. pylori gastritis and PUD (2). Performing noninvasive tests such as the urea breath test (UBT) or the stool antigen test and treating if positive, also known as the “test and treat” strategy, is not recommended in dyspeptic children and adolescents due to lack of evidence correlating positive test results with symptoms in this population. Serologic testing for H. pylori-specific immunoglobulin is not useful for diagnosing or confirming eradication and has been more helpful in epidemiologic based studies (1,2). It is recommended to wait at least 2 weeks after discontinuing PPI therapy and 4 weeks after discontinuing antibiotics to perform biopsy-based and noninvasive tests (UBT, stool test) for confirmation of H. pylori to reduce false negative results (1,2).

In patients with H. pylori-associated ulcer and/or gastritis, the current recommendation is a 14-day course of triple therapy of PPI, amoxicillin and either clarithromycin or metronidazole (1,2). PPI and amoxicillin are the cornerstone of treatment, while clarithromycin and metronidazole are utilized depending on local or geographic antimicrobial resistance. It is, therefore, recommended to obtain susceptibility for the infecting H. pylori strain(s) (1,2,8). A bismuth-based quadruple therapy is used in cases of unknown susceptibilities or documented resistance to clarithromycin and metronidazole (1,2,8). For children younger than 8 years of age, bismuth quadruple therapy refers to bismuth, PPI, amoxycillin and metronidazole. In children older than 8 years of age, bismuth quadruple therapy refers to bismuth, PPI, metronidazole and tetracycline. The majority of patients experience resolution of gastric and duodenal ulcers within 4 to 8 weeks of treatment (1,2,8). Testing for eradication of H. pylori should be undertaken at least 4 weeks after completion of therapy, and noninvasive tests such as UBT and stool antigen test may be used for this purpose.

This case highlights the importance to keep anemia in the differential diagnosis of syncope, even in an adolescent male. Further, pediatricians should think of PUD in evaluating poor weight gain/feeding in younger patients, and abdominal pain in older patients. H. pylori is the most common infectious cause of PUD with an increasing prevalence with age. Endoscopy is the gold standard of diagnosis for H. pylori infection. Noninvasive testing with UBT and stool antigen test is reserved for post-treatment testing only. Treatment consists of a 14-day course of PPI and amoxicillin. The third agent, clarithromycin or metronidazole, is used depending on regional resistance patterns. Testing for eradication at least 4 weeks post treatment is recommended. Early diagnosis can prevent complications such as perforation, bleeding and obstruction.

We gratefully thank our patient for his consent. We also thank Dr. James Boyer, Ms. Alexandra Harris and Dr. Mina Elnemr for their early involvement in this project.

Reporting Checklist: The authors have completed the CARE reporting checklist. Available at https://dx.doi.org/10.21037/acr-21-41

Conflicts of Interest: All authors have completed the ICMJE uniform disclosure form (available at https://dx.doi.org/10.21037/acr-21-41). DRP serves as an unpaid editorial board member of AME Case Reports from November 2020 to October 2022. The other authors have no conflicts of interest to declare.

Ethical Statement: The authors are accountable for all aspects of the work in ensuring that questions related to the accuracy or integrity of any part of the work are appropriately investigated and resolved. All procedures performed in studies involving human participants were in accordance with the ethical standards of the Western Michigan University School of Medicine institutional research committee and with the Helsinki Declaration (as revised in 2013). Written informed consent was obtained from the patient for publication of this case report and accompanying images. A copy of the written consent is available for review by the editorial office of this journal.