Fanconi anemia (FA), autosomal recessive or X-linked disease, is heterogeneous phenotype. Associated with abnormal response to DNA damage, FA is characterized by congenital abnormally, progressive bone marrow failure, and predisposition to neoplasm (1). There was 16% of FA patients developed hematologic malignancies and 10% of them developed solid tumors (2). While Myelodysplastic syndromes (MDS) and acute myeloid leukemia (AML) are the most common hematologic malignancies seen in patients with FA, cases of acute lymphoblastic leukemia (ALL) have also been described in the literature (3). Homozygous or compound heterozygous mutations are usually detected in patients with FA (1), hence we reported a rare case with FA who presented with precursor T cell ALL (T-ALL) at onset, secondary AML arose after he received chemotherapy and got complete remission (CR), however inherited heterozygote mutation of FANCC and heterozygous nonsynonymous single nucleotide variability (SNV) mutation of AKAP9 were confirmed.

We present the following case in accordance with the CARE reporting checklist (available at http://dx.doi.org/10.21037/acr-20-151). 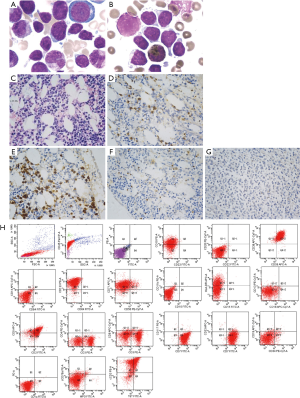 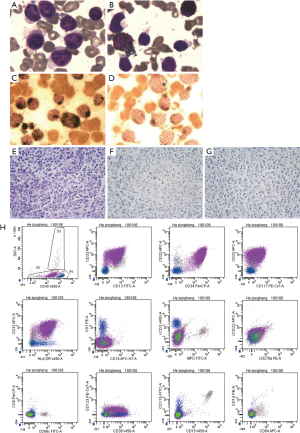 BM sample of the patient in ALL status, which was preserved in liquid nitrogen, and in AML status, peripheral blood samples of his elder sister and parents were collected, whole exome sequencing (WES) was detected for these samples by next generation sequencing (NGS), detectable pathologic gene mutations were checked by Sanger sequencing (6). All procedures performed in the study involving human participants were in accordance with the ethical standards of the institutional and/or national research committee(s) and with the Helsinki Declaration (as revised in 2013). The parents of the patient provided written informed consent to publish the case report and accompanying images. 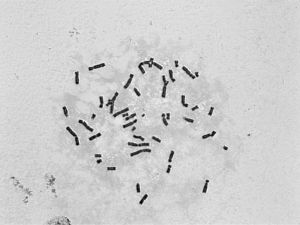 Accumulate dosage of DNR was 210 mg/m2 in preceding treatment for ALL, therefore the patient received chemotherapy consisted of etoposide (VP-16 100 mg/m2/d, day1–3) and cytarabine (AraC 200 mg/m2/d, day1–7). Severe side effects, including significant myelosuppression and severe infection, were presented; the patient died of sepsis and invasive fungal infection three weeks after chemotherapy.

FA is divided into several subgroups according to its genetic mutations (1). Sixteen known mutated genes that are associated with FA had been reported, most of such subgroups are autosomal recessive diseases, of which FANCB mutation is X-linked disease (9). Patients with FA are characterized by hypersensitivity to DNA cross-linking or alkylating agents, such as ultra-violet radiation and MMC, that block DNA replication and RNA transcription, chromosomal breakage test and comet assay test play important role in the diagnosis of FA (8,9). Homozygous or bilateral heterozygote mutations are usually detected in FA patients (1), however heterozygote mutation of FANCC and heterozygous nonsynonymous SNV mutation of AKAP9 were confirmed in the reported patient; clinical diagnosis of FA was considered because of positive results for chromosomal breakage test and comet assay test.

Associated with abnormal response to DNA damage, FA patients have a very high risk of congenital malformation, bone marrow failure and malignancies (2). Although FA is well-known for its relationship to hematologic malignancies, literature reviews had suggested that FA patients are highly predisposed to solid tumors (1). A review of 1301 FA patients who were diagnosed from 1927 to 2001 had reported 192 (14.76%) cases of leukemia/MDS and 105 (8.07%) cases of solid tumor (3); 754 FA patients were enrolled in a 20-year prospective study on the International Fanconi Anemia Registry, 601 cases (79.71%) suffered from bone marrow failure, 173 cases (22.94%) suffered from neoplasms which included 120 cases of hematologic malignancies and 79 cases of non-hematologic neoplasm respectively (2). The most common subgroup of hematologic malignancies in FA patients is AML/MDS of which incidence is approximately 15%, whereas ALL, in which most of them were T-ALL, is rare (10,11).

In literature reports (1,8,9), FA patients presented with homozygous or bilateral heterozygosity mutation, whereas heterozygosity mutation of FANCC and AKAP9 has not reported in FA patients. The A-kinase anchor proteins (AKAPs) are a group of structurally diverse proteins, which have the common function of binding to the regulatory subunit of protein kinase A (PKA) and confining the holoenzyme to discrete locations within the cell (11). There are at least 50 members, often named after their molecular mass, and AKAP9 protein is encoded by AKAP9 gene which is located in 7q21.2. AKAPs are widely distributed in many kinds of cells. Different signal transduction enzymes are recruited near the substrate. Thus, upstream activators and downstream factors are effectively assembled into a macromolecular signal transduction complex, which integrates various signal molecules that co-regulate the phosphorylation of cell substrates, thus ensuring the specificity and accuracy of signal transduction (12). We speculate that AKAP9 protein may interfere with the normal signal transduction of heterozygous mutation expression of FANCC gene and result in inactivation of FANCC gene function. Unfortunately, the patient died of sepsis and we don’t have enough blood samples to explore the role of AKAP9 mutation in patients with heterozygosity FANCC mutation.

In brief, ALL in patients with FA is rarely reported, we present a FA patient who was lack of classic FA manifestation and FA family history, he was onset with T-ALL and secondary AML with myelodysplasia was developed after he achieved CR. Literature reports about ALL related to FA patients are limited and most of such patients were T-ALL. Primary diagnosis of FA usually is ignored when patients presented with ALL, WES should be detected when the secondary tumor arose; further studies are needed to determine for the appropriate chemotherapy regimen in these patients.

Funding: The study was supported by the National Natural Science Foundation of China (Project No. 81900162) and the Chongqing Science and Technology Commission of China PR (Project No. cstc2018jsyj-jsyjX0015).

Reporting Checklist: The authors have completed the CARE reporting checklist. Available at http://dx.doi.org/10.21037/acr-20-151

Conflicts of Interest: All authors have completed the ICMJE uniform disclosure form (available at http://dx.doi.org/10.21037/acr-20-151). The authors have no conflicts of interest to declare.

Ethical Statement: The authors are accountable for all aspects of the work in ensuring that questions related to the accuracy or integrity of any part of the work are appropriately investigated and resolved. Ethical approval for the publication of this case was obtained from the ethical committee of Children Hospital of Chongqing Medical University. All procedures performed in study involving human participants were in accordance with the ethical standards of the institutional and/or national research committee(s) and with the Helsinki Declaration (as revised in 2013). The parents of the patient provided written informed consent to publish the case report and accompanying images.