Granular cell tumor of the abdominal wall, a case report and review of literature

Granular cell tumor (GCT) was first described by Abrikossoff in 1926 as “myoblastic myomata”. GCT is a rare tumor that presents as a painless mass in most patients as a primary symptom. Benign and malignant GCTs are similar in presentation however, malignant tend to be larger (1). These tumors usually arise in superficial tissue like the dermis, subcutis, and submucosa, but can also be found in deep tissues. The variability in the presentation has been documented in the literature for several different subspecialties including surgery, dermatology, and pathology publications (2). GCTs represent 0.5% of all soft tissue tumors (3). Most benign lesions have a good prognosis after surgical resection, however, around 1–2% of these tumors may be malignant. Malignant tumors have a poor prognosis due to their local recurrence and distant metastasis (4-6). GCT is more common in females than males predominantly in the 4th to 6th decades of life (4,7).

In this case report, we present a 73-year-old female with a skin lesion on the mid-abdominal wall, which was diagnosed as a GCT. This case is a reminder that most GCTs present as benign skin lumps mimicking lipomas and sebaceous cysts and require histopathological review for a final diagnosis. Since this patient had previously developed renal cell carcinoma and underwent nephrectomy, it is necessary to rule out the possibility of a metastatic lesion. This case reports a small, slow-growing benign GCT of the anterior abdominal wall which is not a common site for GCTs. Timely diagnosis of GCTs is very important considering local spread, recurrence of benign lesions, and the potential of rapid growth and metastases of malignant variety (8). Over the years, complete surgical resection has been established as the preferred management for benign lesions. Malignant GCTs are managed with surgical resection and lymph node dissection, chemotherapy and radiotherapy have not shown good results.

We present the following case in accordance with the CARE reporting checklist (available at http://dx.doi.org/10.21037/acr-20-160).

A 73-year-old female was referred by her family physician for evaluation of a subcutaneous anterior abdominal wall lesion in May 2019. The lesion was identified on a recent ultrasound by the radiologist and was recommended for further evaluation. The patient was followed-up at the outpatient clinic in June 2019 for a slow-growing painless mass in the right upper abdominal quadrant first noted 12 months ago.

Upon examination, a 2-cm non-tender, mobile, subcutaneous lesion was palpated in the right upper abdominal wall which was firm to hard in consistency. The patient did not report any history of redness, discharge, or trauma of the area with no significant change in shape or size. A left lumbar abdominal incision was also evident from previous surgery. The remaining physical examination was non-significant except for a high BMI. Past surgical history of left radical nephrectomy performed in April 2015 for renal cell carcinoma was reported. No recurrence or metastasis was noted in her follow-up appointments over the ensuing years. Past medical history of systemic lupus erythromatosis, rheumatoid arthritis, hypertension, gastroesophageal reflux disease, and hyperlipidemia were reported. Differential diagnosis included calcified lipoma, sebaceous cyst, and a metastatic lump.

The most recent ultrasound in May 2019 showed a 0.9×0.5×1.3 cm3 hyperechoic solid lesion with distal shadowing within the subcutaneous tissue of the anterior abdominal wall located halfway between the inferior costal margin and the iliac crest along the anterior axillary line (Figure 1). No calcification was seen within the subcutaneous tissue on a subsequent x-ray done the same day. Based on the history and examination surgical excision of this lesion was recommended to rule out the remote possibility of metastatic calcified lesion and confirm the final diagnosis for this nonspecific lesion with multiple possibilities. 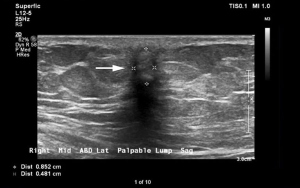 Previous computed tomography (CT) of the abdomen and pelvis performed in January 2018 to rule out the recurrence of renal cell carcinoma was compared to January 2016. A nonspecific 12 mm lesion involving the skin and subcutaneous fat in the right upper quadrant of the anterior abdominal wall was noted (Figure 2). This lesion was more prominent as compared to the possibility of a previous sebaceous cyst or other skin lesions.

Keeping in view the medical history and the imaging the decision was made to excise this lesion in Oct 2019 under local anesthesia. A firm to hard, subcutaneous lesion was completely dissected and a 2.4×2.2×1.3 cm3 specimen was sent for histopathology. 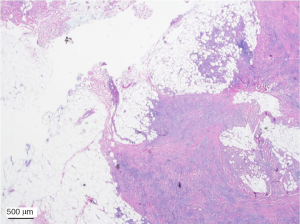 Additional special stains were performed to confirm the diagnosis. Ziehl-Neelsen and Periodic acid-Schiff were negative for acid-fast and fungal organisms, respectively. Immunohistochemistry revealed these cells to be negative for Cytokeratin AE1/AE3, but diffusely positive for both CD68 and S100 (Figures 5,6). Thus, a final diagnosis of GCT was made in Nov 2019.

The patient was seen at a follow-up appointment by the surgeon in November 2019 where she was informed of her diagnosis and treatment plan. She agreed to undergo wide local excision under local anesthesia. In January 2020, the tissue was excised approximately 1 cm wide and 1 cm deep to the previous scar. All margins were properly marked and the specimen was sent for histopathology. The specimen showed scar tissue with extensive fat necrosis, hemosiderin-laden macrophages, and foreign body giant cell reaction. There was no evidence of atypia or GCT.

The patient followed-up with general surgery in February 2020. All the findings were explained to her and she consented to formulate a case report based on her medical condition. The patient had another telephonic follow-up in September 2020 with general surgery; no concerns were raised regarding recurrence at the original excision site and no new skin lesions were reported. The patient will be followed up in the future for her multiple medical needs and also with regards to GCT diagnosis. A timeline of the case is presented in (Figure 7). 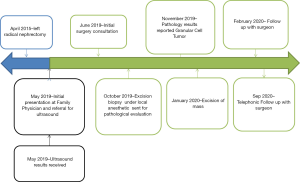 Figure 7 Timeline of the case.

GCT was first described by a Russian pathologist Alexei Abrikossof in 1926 in the skeletal muscle of the tongue. Initially, this tumor was thought to be of skeletal muscle origin and was called a “myoblastoma” (1). Further studies and pathology work were carried over the ensuing years and the origin of these tumors is still uncertain though research has strongly suggested a mesenchymal Schwan cell origin (9,10). The GCT cells demonstrate lysosomes on electron microscopy and are immunoreactive for the S-100 protein and neuron-specific enolase. Furthermore, they also exhibit immunopositivity for CD68 and inhibin-alpha, and while being negative for cytokeratins (9). Histologically, GCT’s can be characterized by polygonal tumor with abundant Periodic Acid-Schiff (PAS) stain positive granular eosinophilic cytoplasm and scattered globules. The cells are arranged in a spindly cord separated by fibrous connective tissue (9,11).

Scientific data gathered through several large series of GCTs suggested that the female to male occurrence ratio is 2:1 (12). The majority of these tumors are benign and carry a good prognosis but 1–2% are malignant with poor prognosis (4,13). Although most lesions are benign, local recurrence has been reported in previous literature. Arbikossof tumors arise in the dermis or subcutaneous tissue. GCTs were most commonly seen in the tongue, upper and lower extremities, anogenital area, and abdominal wall. These have been reported in the gastrointestinal and biliary tract, palate, median nerve, and breast as well.

Majority of GCTs present as solitary, non-tender, slow-growing, non-ulcerative lesions. 5% of GCTs can be multicentric (14). The abdominal wall is not a common site for both benign and malignant GCTs. Alnashwan et. Al. reported 29 previous cases of abdominal wall GCTs thus far (11) (Table 1). Adding our case to this table would be a compilation of 30 reported cases of abdominal wall GCTs. Out of these 30 cases, 11 are malignant, 1 atypical, and 18 including the current case are benign. These are distributed between 6 to 70 years of age, 20 are females and 10 males. The average size for MGCT is 7.25 cm (4.5–11 cm) and benign GCTs are smaller with an average size of 4.0 cm (0.5–10 cm). 6 patients with MGCT developed recurrence and or metastatic deposits at sites including lungs, liver, breast, bone and lymph nodes. Whereas, there was no recurrence or metastasis noted in follow up of 5 MGCT patients. This table does not include the 5 cases of GCT out of 42 reported by Vance and Hudson due to insufficient data of those cases (15). According to the Epidemiology, and End Results (SEERS) database, the median size of malignant GCT tumor was 4 cm as opposed to benign GCTs with a median size of less than 3 cm (13,16). Adverse prognostic factors include tumor size of >5 cm, older age group, local recurrence, p53 immunoreactivity, Ki67 >10%, and metastatic spread (4,16).

Table 1 Reported cases of benign, atypical, and malignant granular cell tumor of the abdominal wall. This table has been reused from an open journal (11)
Full table

Complete surgical resection with clear margins is the recommended treatment for Benign GCTs. Regional lymph node dissection should additionally be carried out for malignant lesions (17). Whereas, radiotherapy and chemotherapy offered low therapeutic value due to marked resistance further emphasizing the role of complete surgical resection (4,18). Currently, there are no established follow-up guidelines for this rare condition, though annual follow-up is recommended to monitor local recurrence and metastatic spread in GCTs (19).

A literature review of GCTs confirms the rarity of these tumors thus the diagnosis is often unsuspected. Therefore, it is important to investigate any skin lesion by studying the histopathological features to establish a definitive diagnosis, ensure that adequate surgical excision has been achieved, and continue surveillance to recognize recurrence or metastasis in a timely fashion.

This case reported a 2 cm, solitary subcutaneous anterior abdominal wall lesion which was diagnosed as Benign GCT, in a patient with a history of renal cell carcinoma. Although the presentation and examination of this lump were indicative of a soft tissue tumor, an array of diagnostic testing and review of systems with regards to past illnesses was imperative; especially with the possibility of recurrent or metastatic malignancy. The patient will be monitored in the future for their GCT.

Reporting Checklist: The authors have completed the CARE reporting checklist. Available at http://dx.doi.org/10.21037/acr-20-160

Conflicts of Interest: All authors have completed the ICMJE uniform disclosure form (available at http://dx.doi.org/10.21037/acr-20-160). The authors have no conflicts of interest to declare.