Myeloid sarcoma (MS) also known as granulocytic sarcoma or chloroma [owing to its green color attributed to the enzyme myeloperoxidase (MPO)], is a rare extramedullary presentation of hematologic malignancies especially acute myeloid leukemia (AML) (1). It is characterized by immature myeloid cells occurring as one or more tumor masses (2). It is also observed during the course of myelodysplastic syndrome (MDS), chronic myeloid leukemia and other myeloproliferative diseases although less commonly (3). In rare instances, MS has been shown to precede the appearance of blood or bone marrow disease by AML. In those cases, it is called isolated, primary or nonleukemic MS (incidence of 2/1,000,000 in adults) (3,4).

We present the following case in accordance with the CARE reporting checklist (available at http://dx.doi.org/10.21037/acr-20-110).

A 47-year-old male with history of migraine headache and depression presented to emergency department with complaints of lower back pain radiating to the left leg associated with weakness and diminished sensation of left leg for approximately nine months. He denied change in appetite, weight loss, urinary or bowel disturbance or saddle anesthesia. On examination, he had diminished touch and pain sensation over left L5 nerve root distribution including numbness to the lateral aspect of left calf and top of left root involving the digits of affected foot. He had motor strength of 4/5 in left lower extremity foot dorsiflexion, 5/5 in all other muscle groups and right lower extremity. All reflexes were preserved. Straight leg raise test was negative. He was able to ambulate without difficulty, no other neurological deficits noted on admission.

Initial laboratory tests did not reveal any major abnormality in blood indices or chemistry. Magnetic resonance imaging (MRI) of lumbar spine revealed intrathecal mass at the level of L4–L5 with homogeneous enhancement along with the L5 nerve root consistent with schwannoma (Figure 1). Patient underwent further imaging with MRI brain and computed tomography (CT) chest/abdomen and pelvis which all were negative for any masses or metastasis. Patient was evaluated by neurosurgery and underwent L4/L5 laminectomy and debulking. Intraoperatively, the frozen sections for pathology reported as small round blue cell tumor. Given the unexpected diagnosis, second frozen was sent which reported the same. There were no findings consistent with schwannoma. Final pathology results revealed extramedullary AML manifesting as MS. Malignant cells stained positive with CD45, CD34, CD33, MPO, CD117, FLI1, CD99, desmin, GFAP and PLAP and focally with CD68, stained negative with EMA, AE-1/AE-3, synaptophysin, CD3, CD5, CD20, BCL1, BCL6, SOX10 and S100 (Figure 2). Patient was further followed up by oncology, bone marrow biopsy was performed and was negative for any bone marrow involvement. Due to persistent symptoms post-surgery and lack of bone marrow involvement, patient was referred to radiation therapy for rapid symptom relief. Given the locally infiltrating unresectable disease, he received external beam radiation therapy (EBRT) 6,000 cGy/200 cGy per fraction (30 fractions). Patient was followed up in oncology clinic with repeat MRI of lumbar spine six months later which showed faint soft tissue density at the site of the previously mass in the lumbar canal, appearing smaller and thinner (likely scar tissue versus residual neoplasm). Patient’s symptoms have improved significantly and is following up with oncology clinic. The hospital course can be found in the timeline of events (Figure 3). 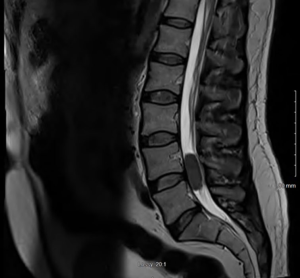 All procedures performed in this study were in accordance with the ethical standards of the institutional and national research committees and with the Helsinki Declaration (as revised in 2013). A written informed consent was obtained from the patient. Kern Medical Institutional Review Board granted ethical approval to report this case (Study # 20029)” needs to be added in the case presentation.

MS was first described by Burns in 1811, and then was called chloroma by King in 1853 because of its greenish appearance caused by MPO expression in malignant myeloid cells. It was later termed granulocytic sarcoma by Rappaport in 1966 until 2002 (5). In 2002, the name “myeloid sarcoma” was declared by World Health Organization (WHO) (1). It may develop de novo or concurrently with AML, myeloproliferative disorder (MPD) or MDS (2). The first case of granulocytic sarcoma associated with leukemia was reported by Dock in 1893 (6).

MS can affect any age, ranging from pediatric to elderly patients (2,7). However, it has been reported that children are more often affected than adults. Both genders can be affected approximately the same rate (8). MS has been reported in 2.5–9.11% of AML patients (1). However, in rare occasions, this tumor can develop before bone marrow infiltration with blasts, which can be confirmed by a negative bone marrow biopsy such as our case. This is termed as isolated or primary MS (1). The frequency of this isolated MS is unknown as it is limited to few case reports (8). It can involve any organ; the common ones being the skin, bone, soft tissue of the head and neck, lymph nodes, testes gastrointestinal tract and peritoneum. Rarely, it involves spinal epidural region. Spinal cord compression by this tumor is even rarer (1,3,5). There are only few reports of granulocytic sarcomas in non-leukemic patients that involve the spine (9,10). Thus, the true incidence of such rare neoplasm is unclear.

The exact underlying mechanism of extramedullary involvement is not fully understood (1). Chromosome 8 defects have been reported to one of the dominant abnormalities in the bone marrow and/or extramedullary sites (11). Clinical diagnosis of isolated MS can be challenging given the rarity and histo-radiological similarities to other neoplasms especially in the absence of hematological disorders. It is reported that 46–75% of these patients were initially misdiagnosed (12). Diagnosis of MS is established by clinical presentation, radiological and pathology findings. Histologically, about half of the tumors are blastic type. Immunohistochemistry shows CD68-KP1 as the most commonly expressed marker, followed by MPO, CD117, CD99, CD68/PG-M1, CD34, terminal deoxynucleotidyl transferase, CD56, CD61, CD30, and CD4 (1,2).

Currently, there is no consensus on treatment of isolated MS due to lack of prospective trials (1,13). Based on the observation of higher rate of progression in patients with isolated disease who were treated with localized therapy as compared to systemic chemotherapy, current treatment regimen is conventional AML type chemotherapeutic regimens, in both isolated MS and MS occurring concurrently with AML (13-16). In one retrospective analysis, 20 non-leukemic MS patients were treated with either AML type chemotherapy (n=16, 80%), combined therapy (n=3, 15%), or radiotherapy (RT) (n=1, 5%); out of which 13 (65%) achieved complete remission (11).

In our case, the choice of treatment modality was based on general consensus in the multidisciplinary tumor board of institution for rapid symptom relief. It was further planned that the patient will be followed up closely in oncology clinic with repeat MRI and if the tumor size regrows or patient’s symptoms worsen, he would potentially need more intensive therapy including chemotherapy.

There is no major role of surgery in symptomatic MS patients as even isolated MS is a part of systemic disease that will mostly respond to chemotherapy, however excision and debulking can be considered before proceeding with chemotherapy (1,18). In our case, patient underwent debulking because of initial MRI impression suggesting schwannoma. Hematopoietic stem cell transplantation (HSCT) is another modality that never has been studied prospectively but there are several retrospective reports have shown positive outcomes (1).

Very little information is reported regarding the prognosis of isolated MS. Antic et al. reviewed data of 12 patients with isolated MS to determine possible prognostic factors based on their age, sex, type, and treatment options (19). Majority of their patient were men, with median age of 39 years old. They reported median overall survival of 13 months with event-free survival of 8 months and concluded that patients who initially received either chemotherapy or HSCT have improved event-free survival. In addition, patients who received combined treatment with both chemotherapy and HSCT had significantly longer event-free survival than those treated with chemotherapy alone (19). Imrie et al. had similar findings of longer survival in patients who treated with anti-leukemic chemotherapy and significantly fewer of these patients subsequently developed AML (20). Possibility of progression to AML in patients with isolated MS have been reported, ranging from 5 to 12 months. Therefore, patients with MS require close follow up similar to patients with AML including detailed physical exam and routine peripheral blood smear (18).

Our aim with this case report is to highlight a rare clinical entity that we encountered during our practice. Although, the initial impression on imaging was schwannoma, pathology results stated otherwise. As clinicians, it is prudent to consider this rare possibility when dealing with isolated spinal cord mass. Unfortunately, the available literature is very limited and the evidence for management is not strong.

In conclusion, this is a rare and challenging case of isolated MS of lumbar spine. The true incidence of such tumors is underestimated and as a result remains unknown. Owing to the rarity of these types of non-leukemic MS and lack of prospective trials, the optimal therapy for such patients has not been identified. In the present case, patient received radiation therapy for symptomatic relief after discussion in multidisciplinary tumor board which is also supported by previous although limited literature. Patient’s symptoms have improved significantly, however, needs close follow up for any worsening in which case he would need more intense therapy including chemotherapy.

Reporting Checklist: The authors have completed the CARE reporting checklist. Available at http://dx.doi.org/10.21037/acr-20-110

Conflicts of Interest: All authors have completed the ICMJE uniform disclosure form (available at http://dx.doi.org/10.21037/acr-20-110). The authors have no conflicts of interest to declare.

Ethical Statement: The authors are accountable for all aspects of the work in ensuring that questions related to the accuracy or integrity of any part of the work are appropriately investigated and resolved. All procedures performed in this study were in accordance with the ethical standards of the institutional and national research committees and with the Helsinki Declaration (as revised in 2013). A written informed consent was obtained from the patient. Kern Medical Institutional Review Board granted ethical approval to report this case (Study # 20029).