Isolated B-cell lymphopenia and autoimmune hemolytic anemia as a curious combination of findings at the time of advanced Hodgkin lymphoma diagnosis: a pediatric case report

Lymphopenia is recognized as a poor prognostic indicator in patients with advanced stage Hodgkin lymphoma (HL), although the underlying mechanism is unknown. We report here a pediatric patient who presented with abdominal pain and systemic B symptoms and was diagnosed with advanced stage HL in the setting of acute Epstein Barr virus (EBV) infection and a concurrent isolated B-cell lymphopenia. Intriguingly, despite severely low numbers of B cells, he also developed a brisk IgG-mediated autoimmune hemolytic anemia (AIHA) requiring prompt stabilization and treatment. His case is unusual for the isolated B-cell lymphopenia, as well as the rather uncommon AIHA in the setting of HL and B cell lymphopenia in a pediatric patient. This case also demonstrates the importance of answering the questions that remain in our current understanding of the interplay between the immune system and the development of lymphoma or other malignancies. These pathophysiologic processes are particularly important to understand in the new era of biologic and immunotherapy treatments that have become available.

We present the following article in accordance with the CARE reporting checklist (available at http://dx.doi.org/10.21037/acr-21-16).

Our patient is a 19-year-old male without any significant past medical history who presented with two weeks of epigastric abdominal pain, subjective fevers, night sweats, fatigue and a five pound weight loss. He reported being in his usual state of health until two weeks prior to his presentation. He had multiple unprotected sexual encounters but denied any orogenital ulcers or palpable lymph nodes. He also denied any personal or family history of infections or autoimmunity. No medical interventions took place prior to this clinical encounter.

Physical exam identified mild pallor and icterus with the rest of the exam being unremarkable including the absence of adenopathy. At presentation, he had a white blood cell count of 10.3 k/uL, marked macrocytic anemia with a hemoglobin of 3.7 g/dL and MCV of 110.5 fL, and evidence of hemolysis with lactate dehydrogenase of 316 U/L, total bilirubin of 3.1 mg/dL (direct bilirubin 0.5 mg/dL), and an absolute reticulocyte count of 278 k/uL. He was found to have a positive Coombs with a panagglutinin. His workup also demonstrated a marked inflammatory response with erythrocyte sedimentation rate >130 mm/hr, C-reactive protein 3.3 mg/dL, and ferritin 399 ng/mL. Infectious testing was negative for HIV but positive for EBV, with quantitative PCR identifying 1,180 viral copies/mL. The remainder of the infectious and autoimmune work up was negative (Table 1). His immunologic work up identified hypergammaglobulinemia with an IgG of 2,080 mg/dL. Peripheral lymphocyte flow cytometry identified 2% CD19+ cells with an absolute count of 43 cells/uL. This profound B-cell lymphopenia persisted despite the EBV viral load diminishing to barely detectable levels of less than 28 copies/mL. Computed tomography (CT) scan of the chest, abdomen and pelvis identified diffuse mediastinal and abdominal lymphadenopathy, as well as hepatosplenomegaly with focal lesions in the liver and spleen. A Positron Emission Tomography (PET) scan identified fluorodeoxyglucose (FDG)-avid lymph nodes above and below the diaphragm as well as in the liver. As he was initially deemed an unsafe candidate for anesthesia due to his severe hemolytic anemia, a lymph node biopsy was delayed for four days until he was clinically stable while his AIHA was treated with high dose intravenous immunoglobulin (IVIG) and corticosteroids which were subsequently weaned over a span of weeks. 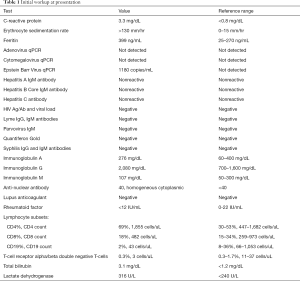 Although malignancy was suspected early in this young adult male patient with EBV infection, diffuse adenopathy, autoimmunity, and isolated B-cell lymphopenia, a wide differential diagnosis was considered including immunologic abnormalities such as X-linked lymphoproliferative syndrome (XLP) and autoimmune lymphoproliferative syndrome (ALPS). Peripheral blood flow cytometry identified <2% double negative T cells. Flow cytometry identified normal XLP1 and XLP2 protein expression. As the hemolytic anemia responded to treatment and the hemoglobin stabilized at 7 g/dL, a periaortic lymph node biopsy was obtained and identified a predominantly CD45+ cell population with 81% T-cells and 14.7% B-cells without a clonal T- or B-cell expansion. There were 1.25% CD3+, alpha/beta T-cell receptor positive, CD4 and CD8 double negative T-cells. Histopathology demonstrated an atypical EBV+ lymphoid proliferation, with the cells positive for CD30 and presence of CD20 positive scattered follicles. The biopsy was morphologically consistent with Classical Hodgkin Lymphoma, Mixed Cellularity subtype (CHL, MC) (Figure 1). Diagnosed with CHL, stage IVB, he was treated with the standard combination therapy of cyclophosphamide, doxorubicin, vincristine, bleomycin, prednisone, and etoposide, and he achieved a complete remission. He was classified as a rapid early responder by PET response, and he did not receive any radiation therapy. He also achieved resolution of his presenting lymphopenia. His treatment course was marked by adrenal insufficiency, one hospital admission for fever with neutropenia, and another admission for workup of a seizure-like episode; he recovered from all three. He remains in remission now over a year from diagnosis. 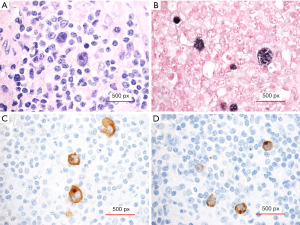 Consent from the patient was not required as no photos or other personal identifiers were used in the text. All procedures performed in studies involving human participants were in accordance with the ethical standards of the institutional and national research committee and with the Helsinki Declaration (as revised in 2013).

To our knowledge, this is the first report of isolated B cell lymphopenia in HL, a disease characterized by the presence of Reed-Sternberg cells. Lymphopenia has long been recognized as a poor prognostic indicator in patients with advanced HL (1-4). The International Prognostic Score created in 1998 identified seven factors predictive of freedom from progression and overall survival, and a total lymphocyte count <600/mm3 or 8% of the total white blood cell count (2) is a poor prognostic indicator. The reason for the association between lymphopenia and poor outcome in malignancy is not well understood. Peripheral blood lymphocyte count may be a marker of immune status, with the lymphocyte-monocyte ratio (LMR) reflecting tumor microenvironment. A low LMR has been associated with more aggressive disease course and found to be a prognostic biomarker of survival outcomes in HL (5). The negative impact on survival seen with lymphopenia may also simply be a result of increased infectious complications. For example, Ray-Coquard et al. demonstrated that early post-chemotherapy lymphopenia is predictive of an increased likelihood of experiencing the complication of fever with severe neutropenia (6). Others have postulated that lymphopenia is an indicator that the patient will have other complications of therapy and require more supportive care in the form of blood and platelet transfusions (7). Lymphopenia may also be seen as an indication that the immune system’s natural anti-tumor capacity is impaired, as adequate numbers of functional lymphocytes are likely required for proper immune surveillance for malignancy. For example, Plonquet et al. demonstrated that among the various lymphocyte abnormalities found at the time of diagnosis in patients with Diffuse Large B-cell Lymphoma, a low natural killer (NK) cell count was associated with worse event-free survival, and higher NK cell counts were associated with improved survival (8). This is particularly demonstrative as it is understood that the role of NK cells is critical in immune system surveillance for malignancy (8). Regardless of the mechanistic reasons for the association between lymphopenia and worse outcome, no author has yet distinguished between T-cell and B-cell lymphopenia specifically at the time of diagnosis of HL.

Up to 40% of HL cases are associated with EBV (9). EBV-positive HL tissues are enriched in genes characteristic of T-cell and antiviral responses suggesting that EBV also has a role in influencing the tumor microenvironment (10).

A host of immunotherapy approaches, being utilized or investigated in various types of malignancies, are particularly of interest in the treatment of lymphoma. Anti-PD1 therapies are noteworthy examples of immunotherapy approaches that have been gaining more popularity and a broader range of indications including in the treatment of HL (11). The successful use of other biologic therapies including rituximab and brentuximab also emphasizes the point that our understanding of the immune system and its interactions with malignancy, especially lymphoma, are continuing to evolve and improve. The side effect profiles of these immune-modulating drugs, which include AIHA, thrombocytopenia, and other autoimmune disorders, underscore the importance of appreciating how to best utilize these agents in the face of the already present immune-dysregulation at the time of diagnosis, such as that seen in our patient.

AIHA has been reported in HL (12,13). Although the incidence of HL peaks at two age spans: between 15–35 years and older than 55 years, AIHA is more commonly reported in adults. The reported incidence of AIHA is 0.2–4.2% in adults and rarer still in pediatric patients. AIHA may precede HL by years to months. AIHA in HL occurs mostly at stages III and IV of nodular sclerosis HL (NSHL) or mixed cellularity HL (MCHL) (13,14).

In addition to being an unusual finding at the time of Hodgkin diagnosis, the marked B-cell lymphopenia seen in this pediatric case is also intriguing due to the concomitant presence of a severe IgG-mediated AIHA. The total hypergammaglobulinemia seen in our patient, however, is not atypical for autoimmune conditions generally, as peripheral B-cell numbers are not necessarily indicative of total B cell numbers that include tissue-resident B-cells. Fortunately, his AIHA responded quickly and durably to the administration of corticosteroids and the treatment of his lymphoma.

To our knowledge, this is the first reported case of isolated B-cell lymphopenia occurring concomitantly with new onset HL in a pediatric patient. Improved understanding of the mechanisms involved in lymphopenia, and specifically isolated subset lymphopenia, as it applies to the tumor microenvironment can potentially guide targeted immunotherapy strategies in the future.

Reporting Checklist: The authors have completed the CARE reporting checklist. Available at http://dx.doi.org/10.21037/acr-21-16

Conflicts of Interest: All authors have completed the ICMJE uniform disclosure form (available at http://dx.doi.org/10.21037/acr-21-16). The authors have no conflicts of interest to declare.

Ethical Statement: The authors are accountable for all aspects of the work in ensuring that questions related to the accuracy or integrity of any part of the work are appropriately investigated and resolved. Consent from the patient was not required as no photos or other personal identifiers were used in the text. All procedures performed in studies involving human participants were in accordance with the ethical standards of the institutional and national research committee and with the Helsinki Declaration (as revised in 2013).