Simultaneous herpes zoster rash in the upper extremity and interscapular region that resembles innervation zone of the dorsal ramus of the cervical nerve root: a case report

Cervical radiculopathy is the clinical description of a condition in which a nerve root in the cervical spine becomes inflamed or damaged, resulting in a change of neurological function. Radiculopathy rarely occurs from spontaneous neurogenic inflammation, and it is commonly caused by compression of the cervical nerve root by a substance from a herniated intervertebral disc or arthritic bone spur in the cervical foramen by degenerative alteration. It leads to radicular pain, sensational disturbance, and motor dysfunction along the nerve’s pathway into the upper extremity on the ipsilateral side, corresponding to a dermatome pattern (1). In addition, neck or scapular pain is commonly seen before the onset of pain in the upper extremity during cervical radiculopathy (2,3). Although a previous article reported cervical nerve root involvement in cervical radiculopathy as the origin of neck or scapular pain, the cause of the pain had been uncertain (4). The aim of this report is to present a case of herpes zoster with simultaneous skin rash in the upper extremity and interscapular region. To the best of our knowledge, this is the first report to visualize the innervation zone of the medial branches of the dorsal ramus of the cervical nerve root on the scapula, which corresponds to the painful scapular region in cases of cervical radiculopathy.

We present the following case in accordance with the CARE reporting checklist (available at http://dx.doi.org/10.21037/acr-21-1).

A 71-year-old healthy woman presented to our clinic with sudden shoulder pain on the right side without any traumatic episodes. She had no major medical history, and no immunodeficiencies were noted. On initial physical examination, she had motion pain and stiffness on the right shoulder, the painful arc test was positive at 90° of abduction, and the Hawkins sign was positive (5). Radiological examination showed no abnormality of the shoulder, and on the basis of these findings, non-calcific tendonitis of the rotator cuff was first suggested, and then she was treated with triamcinolone acetonide injection into the subarachnoid space. She was transiently relieved from the shoulder pain for 3 days, and afterward, she repeatedly suffered from shoulder and scapular pain associated with neuralgia in the upper extremity on the right side. On the second physical examination, Jackson’s test and Spurling’s test showed positivity for scapular pain and neuralgia, which was similar to the symptom of cervical radiculopathy (1). At the same time, she had a blistering skin rash on the ulnar side of her upper extremity and interscapular region on the right side (Figure 1). She was referred to a dermatologist, who diagnosed this rash as herpes zoster and prescribed oral amenamevir and topical vidarabine ointment for 7 days. Her neuralgia continued after the disappearance of the skin rash and oral treatment with 300 mg/day pregabalin for 14 days, and she was treated by a pain physician. After 1 year, she presented with mild postherpetic neuralgia of the 3rd to 5th fingers of the right hand and required 75 mg/day oral pregabalin.

Figure 1 A 71-year-old woman showed blistering skin rash in the ulnar side of her upper extremity (left and center) and interscapular region (right) on the right side simultaneously.

A copy of the written consent is available for review by the Editor-in-Chief of the journal. All procedures performed in studies involving human participants were in accordance with the ethical standards of the institutional research committee and with the Helsinki Declaration (as revised in 2013). 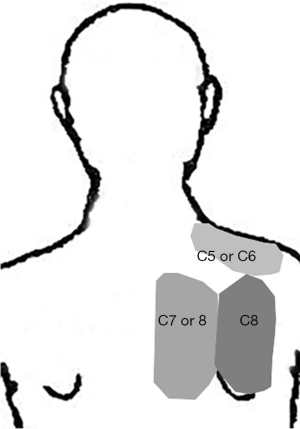 Figure 2 The Schema modified with the previous report by Tanaka et al. in 2006 (4). Note that the scapular pain occurs in the suprascapular, interscapular and scapular regions corresponding to C5 or C6, C7 or 8 and C8 cervical radiculopathy, respectively.

Skin rash due to reactivation of herpes zoster is commonly seen in the thoracic dermatomes and cranial nerves, and it is relatively rare in cervical dermatomes (7-11). There are a few case reports of herpes zoster in the upper extremity, particularly in ulnar nerve distribution (7,9-11), which are similar to our case; however, to our knowledge, no study has reported a rash in the simultaneous interscapular region. One possibility is that no clinician can imagine skin rash in the scapular region and ulnar nerve innervation in the upper extremity originating from the same ganglion of the cervical spine because of the large distance between the two regions. Another possibility is that VZV traveling along the medial branches of the dorsal ramus of the cervical nerve root causing skin rash in the interscapular region itself is extraordinary; thus, our case is the first report on this phenomenon.

In conclusion, a case of herpes zoster with simultaneous skin rash in the upper extremity and interscapular region was reported. The interscapular region illustrated by the skin rash corresponded to the innervation zone of the medial branches of the dorsal ramus of the cervical nerve root, which resembled the scapular region in the case of C8 cervical radiculopathy. However, further case reports are required to confirm this unique phenomenon.

Reporting Checklist: The authors have completed the CARE reporting checklist. Available at http://dx.doi.org/10.21037/acr-21-1

Ethical Statement: The authors are accountable for all aspects of the work in ensuring that questions related to the accuracy or integrity of any part of the work are appropriately investigated and resolved. Written informed consent was obtained from the patient for publication of this case report and any accompanying images. A copy of the written consent is available for review by the Editor-in-Chief of the journal. All procedures performed in studies involving human participants were in accordance with the ethical standards of the institutional research committee and with the Helsinki Declaration (as revised in 2013).