Cardiac masses are uncommon and they can be classified as tumors or non-tumoral masses that include thrombus and cysts. Primary cardiac tumors are rare, with a prevalence of approximately 0.02–0.056% (1,2). Tumors are distinguished in benign tumors, tumors of uncertain biologic behavior, germ cell tumors, and malignant (3). Primary pericardial neoplasms are very rare and they are detected incidentally during routine cardiac imaging in asymptomatic patients (4); their prevalence ranges from about 0.001% to 0.007% (5). Some cardiac masses can present with systemic symptoms or symptoms related to their localization.

Imaging plays a central role in the diagnosis of cardiac masses; chest X-ray is often the first step and it usually shows enlarged cardiac silhouette with abnormal mediastinic contour (6). Echocardiography is always performed because it is a non-invasive and economic tool; it can reveal the cardiac mass and from its characteristics, it may indicate benign or malignant aspect and so it may help in the differential diagnosis, together with cardiac computed tomography (CT) scan and magnetic resonance imaging (MRI). We report the case of a patient with a giant pericardial mass. We present the following case in accordance with the CARE reporting checklist (available at http://dx.doi.org/10.21037/acr-20-141).

An 82-year-old man was admitted to the hospital for great dyspnea and lower-extremity edema, started some days previously. He was a former smoker and he had history of hypertension and high uric acid level. He took antihypertensive drugs. 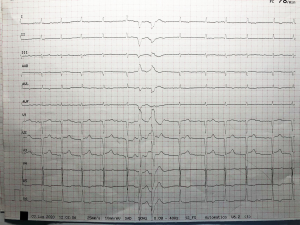 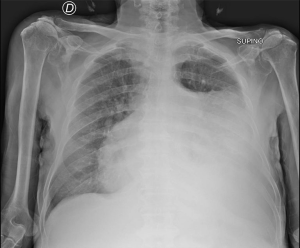 The echocardiography performed on the admission day showed a great pericardial mass measuring 4 cm × 10 cm that appeared to arise from the left atrioventricular groove and was adjacent to the anterior, posterior and lateral walls of the left ventricle and to the left atrium (Video 1). It did not invade into the epicardial fat or myocardium; it was iso/hypoechoic, well circumscribed, non-contractile, homogeneous and with a clear separation from the wall, probably encapsulated (Figure 4).

Figure 4 Echocardiography. (A) Great pericardial mass was adjacent to the anterior, posterior and lateral walls of the left ventricle and to the left atrium. (B) The mass appeared to arise from the left atrioventricular groove.

There was even a great pericardial effusion but there were no signs of cardiac tamponade (Figure 5). Transthoracic echocardiogram showed dilated left ventricle with global hypokinesia and a severe reduced ejection fraction of 28%; main pulmonary artery was dilated and there were sever functional mitral regurgitation and moderate tricuspid regurgitation (Figure 6). During the hospitalization a coronary angiography was performed, detecting no coronary arteries stenosis.

Figure 5 Echocardiography. (A) In the parasternal long-axis the mass measured 6 cm × 5 cm. (B) There was a great pericardial effusion. 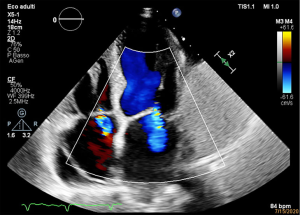 Administration of intravenous diuretics was started and Cardiac-MRI was purposed, but in one week patient’s clinical condition improved and he was discharged from the hospital. He refused additional exams.

The echocardiography can identify the mass, its localization, extension, size and even tissue characteristics. Echocardiography has a narrower field of view than MRI or CT in general (4), but it plays a central role in the first approach to the patient with cardiac symptoms because it can be performed in the Emergency Department, it is an economic, simple, non-invasive test. It may aid to diagnosis, prognosis, treatment and patient follow-up of cardiac masses. In this case, echo characteristics suggested that the mass was a lipoma that is composed by adipose tissue.

Lipomas are primary benign cardiac tumors that frequently develop from the subendocardium, but they may also grow from the pericardium or on the cardiac valves (4).

Small lipomas are often asymptomatic and found incidentally, whereas great or pericardial lipomas may manifest with symptoms such as compression of coronary arteries, arrhythmias, and outflow obstruction (8,9). They can become giant without producing any symptoms because their growth is slow. A case of giant pericardial lipoma that induced cardiac tamponade was described on August 2019 (10). We reported a case of giant pericardial lipoma that probably produced pericardial effusion but this may have been induced also by the heart failure. Thereby heart failure may derive by mass compression of cardiac chambers. We can also assume it because the coronary angiography performed during the hospitalization did not show any atherosclerotic plaque. Moreover, mitral regurgitation stems from the severe left ventricle dilation and the consequential leaflet tethering.

Thanks to a detailed anamnesis, we found that pericardial mass was identified twenty years ago on a chest-CT. Because of mass favorable echocardiographic characteristics, size and time of the development, we purposed that it was a lipoma.

Surgical resection is necessary to prevent tumor compression syndromes of the heart and even to exclude a malignant process by histological examination of excised specimens (11). In fact, even if it is very rare, great mass may evolve in liposarcoma.

In this case we remarked the central role of echocardiography as technique of choice to first approach in patient with cardiac mass and we recommended the choice of surgical resection even if the tumor is benign and asymptomatic.

Reporting Checklist: The authors have completed the CARE reporting checklist. Available at http://dx.doi.org/10.21037/acr-20-141

Conflicts of Interest: All authors have completed the ICMJE uniform disclosure form (available at http://dx.doi.org/10.21037/acr-20-141). The authors have no conflicts of interest to declare.