Pancreatic ductal adenocarcinoma (PDAC) remains one of the most deadly malignancies, frequently presenting as metastatic disease with over 57,000 new diagnoses and 47,000 deaths a year, as most patients with stage IV disease survive for less than 1 year (1). The vast majority lack targetable genomic variants, and the standard of care for patients with metastatic disease is cytotoxic chemotherapy. High microsatellite instability (MSI-H) occurs in roughly 1% of PDAC cases, the majority of which have Lynch syndrome (2). In colon cancers which are MSI-H, response rates to anti-PD-1 antibody treatment approach 50% and are frequently durable (3); however, in PDAC, response rates are approximately 18% with dramatically shorter progression free survival, indicating that other immune resistance mechanisms play a role (4).

HER2 (ERBB2) amplification is observed in approximately 2% of patients with PDAC (5) and evidence for anti-HER2 therapies in this patient population is limited. Further, KRAS mutations, which are common in metastatic PDAC, may attenuate the activity of anti-HER2 therapeutic strategies as has been observed with HER2 amplified and KRAS mutated metastatic colorectal cancer (6). HER2 amplification rarely co-occurs with MSI. In the Genomics, Evidence, Neoplasia, Information, Exchange (GENIE) database of over 90,000 advanced solid tumors only 105 patients (0.1%) had both HER2 amplification and MSI-H (7).

Despite the aggressive behavior of PDACs, the disease rarely progresses to the central nervous system (CNS) (8). It is possible with prolonged therapy, more patients will develop CNS metastasis later in their disease course, however this event remains exceedingly uncommon in this population. Here, we describe a patient with MSI-H, HER2 amplified pancreatic cancer. After progression on FOLFIRINOX, this patient responded to immunotherapy, then relapsed with brain metastasis. The patient then experienced a brief response to chemotherapy and anti-HER2 therapy, followed by progression with leptomeningeal disease. This case highlights the importance of obtaining up-front genomic profiling on patients with metastatic pancreatic cancer and exemplifies tumor adaptation under selective pressure. It also demonstrates the refractory nature of this malignancy and the need for a more sophisticated understanding of molecular drivers of treatment resistance.

We present the following case in accordance with the CARE reporting checklist (available at http://dx.doi.org/10.21037/acr-20-154).

A 43-year-old female with a history of hypertension, hyperlipidemia, and a 2-year history of type 2 diabetes mellitus presented with acute, intermittent mid-back pain over 2 months. After a visit to her primary care doctor, she underwent a workup for possible pulmonary embolism including a computed tomography (CT) pulmonary arteriogram which was unremarkable. A CT of the abdomen and pelvis confirmed a septated pancreatic body/tail mass with multiple liver lesions (Figure 1A). Endoscopic ultrasound (EUS) with biopsy of pancreatic and liver masses confirmed adenocarcinoma, CK7+/CK20−, consistent with pancreatic primary and thus stage IV disease. CA19-9 was elevated at 6,600 U/mL. Upon presentation, she noted a weight loss of 15 pounds over a month, worsening glucose control, and fatigue. Next-generation sequencing (NGS; FoundationOneCDx, 2018) results from the liver metastasis revealed KRAS G12D and TP53 W146 mutations as well as ERBB2 amplification. Tumor mutational burden could not be determined. Immunohistochemistry (IHC) revealed 3+ staining for HER2 in 75% of tumor cells (Figure 1B). IHC for mismatch repair proteins showed loss of MLH1 and PMS2 expression (Figure 1B). MSI-H status was confirmed by PCR testing, which revealed an increased number of novel repeat lengths. MLH1 was negative for promoter methylation. Germline testing for heritable mutations was negative (Invitae Custom Pancreatic Panel, 2018). 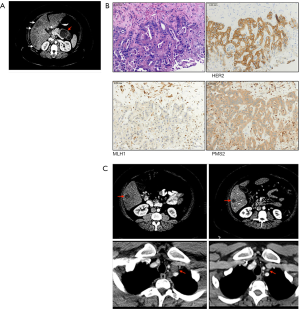 To alleviate her symptoms and expeditiously treat her, she was initiated on standard-of-care first line FOLFIRINOX with modest radiographic response after 4 cycles of treatment (Figure 1C). After 4 additional cycles, FOLFIRINOX was discontinued due to rising CA19-9 and clinical progression (Figure 2A). Given her MSI-H disease, she was switched to ipilimumab 1 mg/kg and nivolumab 3 mg/kg. This was chosen over anti-PD-1 monotherapy due to the inadequacy of response in non-colorectal MSI-H cancers (4). Shortly after initiating immunotherapy, her CA19-9 declined precipitously (Figure 2A) to 2,000 U/mL with substantially improved pain. After the fourth dose, she developed pruritis and a severe headache with blurry vision. A brain magnetic resonance imaging (MRI) revealed hypophysitis and multiple punctate brain metastases; cortisol was low (0.4 µg/dL), as was adrenocorticotropic hormone (ACTH) (19 pg/mL), follicle-stimulating hormone (FSH) (6.8 mIU/mL), luteinizing hormone (LH) (2.4 mIU/mL), and thyroid stimulating hormone (TSH) (0.04 µIU/mL). Her headache resolved with hydrocortisone and she was continued on maintenance nivolumab. After a month, she developed worsening gait instability. A subsequent brain MRI demonstrated isolated progression in two cerebellar lesions which were treated with stereotactic radiosurgery (SRS) (Figure 2B). 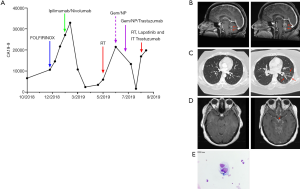 Following SRS, a restaging CT demonstrated marked disease progression in the liver and lymph nodes, a new renal infarct, and lymphangitic spread in the lungs (Figure 2C). She was initiated on gemcitabine and nab-paclitaxel, and trastuzumab was added in cycle 2. After 2 cycles, her CA19-9 decreased to 13,000 U/mL and abdominal pain improved. At cycle 4, she developed dizziness and gait imbalance. MRI revealed enlargement of previously treated cerebellar lesions. Circulating tumor DNA was analyzed via NGS and revealed CDK6, CCNE1, and KIT amplifications, as well as the TP53 W146* mutation [mutant allele frequency (MAF) =35.6%] and KRAS G12D mutation (MAF =22.1%) consistent with the patient’s baseline tumor tissue NGS. HER2 amplification and MSI-H were not detected. Due to CNS progression, treatment with lapatinib and trastuzumab was initiated. To treat leptomeningeal disease (Figure 2D,E), intrathecal trastuzumab was administered. After a very brief period of relief, the patient continued to experience worsening nausea, headaches, gait instability, and developed horizontal nystagmus along with visual difficulties. The decision was subsequently made to enroll in hospice, and she passed peacefully with her family.

PDAC confers a high mortality rate and propensity for early metastasis, emphasizing the urgent need for improved therapeutic options. Unfortunately, targetable molecular alterations are rare. Given the limited treatment options available in this malignancy, NGS can be transformative for a small subset of patients. We highlight a case of MSI-H metastatic PDAC displaying concurrent HER2 amplification. Her disease responded and relapsed on tailored therapeutic approaches, with treatment failure in the CNS.

While many patients with MSI-H cancers have durable responses to anti-PD-1 treatment, up to half experience either de novo or acquired resistance (3,9). This is particularly relevant in non-colorectal cancer cohorts such as PDAC, indicating that tumor-driven immune evasion beyond T cell exhaustion and the lack of neoantigens is driving immunotherapy resistance. Indeed, this is further supported by the fact that vaccines have elicited neoantigen specific T cell responses without meaningful clinical benefit in this patient population (10). Given the heterogeneous, immunosuppressive microenvironment of pancreatic cancer, a myriad of possible mechanisms could be contributing to these findings. Regulatory T (Treg) cells and myeloid-derived suppressor cells (MDSCs) contribute to immune suppression and disease progression in pancreatic cancer, and have a well-established role in immune checkpoint inhibitor resistance (11,12). Tumor associated macrophages, which occupy the majority of leukocytes in the pancreatic tumor microenvironment, are frequently polarized toward an M2 phenotype which facilitates disease progression and mitigates T cell responses (11,13). Finally, advanced pancreatic cancers show a scarcity of dendritic cells (DCs) (14), which differentiate tumor from self and are required for successful immune checkpoint blockade (15). Tumors may also co-opt DCs to induce a tolerogenic state which dampens CD8+ T cell proliferation and promotes Treg generation (16). Our patient experienced an initial response to immunotherapy followed by relapse, which could be due to one or more of the microenvironmental alterations discussed above. The loss of MSI-H may represent tumor evolution under selective pressure, or it was not detected by ctDNA, which has a sensitivity of 95% (17). Microsatellite instability is thought to be a driver event, and MSI-H loss has not been previously described in the literature nor was tissue confirmation feasible in this patient. Notably, the tumor lacked any known mutations associated with checkpoint inhibitor resistance, suggesting non-genomic mechanisms of treatment failure (18).

While our patient responded briefly to anti-HER2 therapy in combination with chemotherapy, her disease eventually progressed, and the HER2 amplification was no longer detectable by ctDNA. Since ctDNA shedding remained high—as evidenced by the high MAFs for TP53 and KRAS—it is unlikely that loss of HER2 amplification was related to assay sensitivity. The more probable explanation is that her disease lost HER2 amplification to escape HER2 inhibition, as has been observed in up to half of all patients with metastatic HER2+ gastric cancer (19). Given that her relapse occurred in the CNS with leptomeningeal disease where directed penetration of systemic therapy is poor, we pursued treatment with intrathecal (IT) trastuzumab based on evidence from a phase 1 clinical trial (20). It is possible that the disease in the CNS also lacked HER2 amplification which contributed to poor response in this setting. We were unable to perform HER2 IHC or ctDNA analysis on the cerebrospinal fluid (CSF), and the patient’s illness and quality of life considerations prevented repeat biopsies, all of which represent diagnostic limitations in this case.

In summary, we present a unique case of HER2 amplified, MSI-H pancreatic adenocarcinoma which progressed to the CNS with leptomeningeal involvement after responses to multiple targeted treatments. This underlines the importance of up-front molecular profiling and multidisciplinary involvement in advanced pancreatic cancer. Other important points to derive from this case include having early suspicions of CNS disease in patients with HER2 amplified and/or MSI-H pancreatic cancer and to anticipate the development of disease resistance in sequentially treating patients with pancreatic cancer harboring targetable mutations. Our patient’s case provides a humbling window into the insufficient understanding of therapeutic resistance mechanisms in pancreatic cancer, clearly illustrating that dedicated collaborative and translational efforts will be necessary to overcome these hurdles and improve clinical outcomes in this disease.

We would like to thank the Duke Molecular Tumor Board, Michelle Green, PhD, and the Duke Brain Metastasis Center.

Reporting Checklist: The authors have completed the CARE reporting checklist. Available at http://dx.doi.org/10.21037/acr-20-154

Conflicts of Interest: All authors have completed the ICMJE uniform disclosure form (available at http://dx.doi.org/10.21037/acr-20-154). CA receives research funding from PUMA, Eli Lilly, Merck, Seattle Genetics, Nektar, Tesaro, G1-Therapeutics, Zion, Novartis, and Pfizer; Royalties from UpToDate and Jones and Bartlett, and is a consultant for Genentech, Eisai, IPSEN, Seattle Genetics, Astra Zeneca, Novartis, Immunomedics, and Elucida. MAM is a consultant for Novartis/AAA, Bayer, and is a speaker for Genentech, Lexicon, Ipsen, Taiho, and Celgene. YZ receives research funding from the NIH and Astra Zeneca, is on the advisory board for AIM Specialty Health, Vivor, Sam Fund, RTI, McKesson, Family Research Foundation, and Coernicus-WCG IRB, and spouse employment at Shattuck Labs. JHS receives research funding from Exelixis, Genentech, Amgen, Abbvie, AstraZeneca, Sanofi, Curegenix, AStar, Nektar, Seattle Genetics, Roche/Genentech; is on the advisory board of Bayer, Amgen, Roche/Genentech, Natera, Seattle Genetics, Pfizer, and Abbvie; and is a consultant for Mereo Biopharma, Amgen, Bayer, Seattle Genetics, and Chengdu Kanghong Biotechnology. The other authors have no conflicts of interest to declare.