Rectus sheath hematomas (RSHs) are an uncommon occurrence with a wide variety of severity and outcomes. While frequently self-limiting, RSHs can result in severe complications and carry a mortality risk of 4% (1). Unfortunately, there is a relative lack of information in medical literature and training on abdominal wall etiologies of an acute abdomen. Improved understanding of risk factors, recognition, work-up, and treatment of this condition is critical for better management and outcomes.

We present a case of a post-cesarean delivery patient who suffered minimal trauma after her procedure that subsequently caused a rectus muscle hematoma complicated by necrotizing fasciitis.

We present the following case in accordance with the CARE reporting checklist (available at http://dx.doi.org/10.21037/acr-20-130).

A 26-year-old with an obstetric history of G4P2113 presented to clinic with a 2-week history of progressive lower abdominal pain. The patient had an elective repeat low transverse cesarean (RLTCS) at 39 weeks. The cesarean was complicated by a post-partum hemorrhage episode of 400 mL that responded to bimanual massage and clot evacuation. Her previous two cesarean deliveries were uncomplicated and she denied any other abdominal surgeries. The postpartum course in house was uneventful and she was discharged home on postoperative day (POD) 3.

Approximately 1-week after the patient’s surgery, her 50-lb daughter jumped with her full weight onto her abdomen. At that time, the patient denied any persistent abdominal pain and she continued with her routine. Days later she developed mid-lower abdominal pain, induration and a growth around her incision. The patient delayed her care and had an appointment in our clinic 25 days after her RLTCS. On exam her vitals were stable without fever or tachycardia. She had a notable protruding mass arising on her abdomen that was slightly tender to palpation. There was no fluctuance, erythema, and overall the wound was well approximated without signs of an infection. Due to the protruding mass, a bedside ultrasound was performed. The ultrasound demonstrated a heterogenous fluid collection beyond the subcutaneous tissue. The fascial integrity was hard to determine, and a computed tomography (CT) scan was subsequently ordered. The CT scan demonstrated a 15.0 cm × 9.5 cm × 7.9 cm complex fluid collection extending into the abdominal wall musculature and subcutaneous soft tissue that was compatible with a rectus muscle hematoma (RSH) type II (Figures 1,2). No air was seen in the fluid collection to definitively suggest infection. The patient was admitted expediting a CT angiogram that showed an irregularity of the right inferior epigastric artery. The findings either represented vasospasm of the vessel or a small extravasation. Interventional Radiology did not feel embolization or drain placement was necessary at that time. The decision was made to continue with observation in house to monitor the size of the hematoma and evaluate for possible surgery. 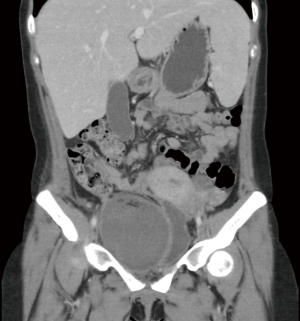 Figure 1 Computed tomography showing the coronal view of the hematoma. 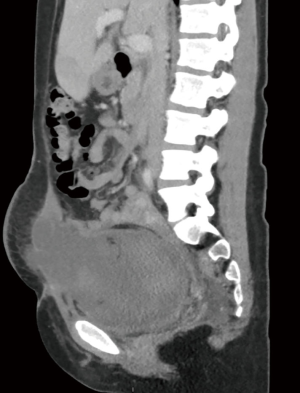 Figure 2 Sagittal view of the hematoma on computed tomography, showing an obvious deformity of the abdominal wall.

While being monitored overnight, the patient spiked a fever of 39 °C that resolved with acetaminophen. Her white blood cell (WBC) remained normal at 8.5×103/µL and she demonstrated no other signs of infection. During her stay, the patient began having concerns about leaving her other children at home and she signed out of the hospital against medical advice. She was discharged home with a 2-week course of PO amoxicillin and clavulanic acid combination.

The following morning, the patient presented to the emergency department with worsening abdominal pain, erythema, and profound induration. The patient spiked a fever of 39.5 °C but the remainder of her vitals were normal. Her white count at that time was 11.4×103/µL. The patient was taken for a combined diagnostic laparoscopy with possible laparotomy. On laparoscopy, there was a deformity based on the mass effect of the hematoma with an adherent piece of omentum, but no other deformities were noted (Figure 3). Decision was made to perform an exploratory laparotomy to drain the hematoma. Approximately, 50 cc of hematoma was evacuated between the rectus and fascia with copious amounts of purulent discharge. The subcutaneous tissue and rectus muscles appeared necrotic (Figure 4). General surgery was consulted for the concern of necrotizing fasciitis. The wound required irrigation and debridement of the abdominal wall by the general surgery team. The patient required two more additional wound debridement procedures and a final closure of a 14×10 ventral hernia was completed using a biological porcine mesh (StratticeTM, Allergan, Irvine, California, USA). A negative pressure wound vacuum was applied. Her initial hospital course can be found in the timeline of events (Figure 5). The patient showed clinical improvement in the hospital and her WBC trended down to a final value of 7.3×103/µL. Once the patient met discharge criteria, she was sent home with wound care follow ups in place. Her initial post-operative course was uncomplicated. She appeared in the emergency department 6 months after her surgery with lower abdominal pain. A CT obtained at that time found to have a small fluid-collection around her mesh. No internal air was seen signifying re-infection. This was aspirated by interventional radiology 2 weeks later and 4 cc of cloudy fluid was removed. The follow-up culture showed no organisms or polymorphonuclear leukocytes (PMNs). This patient has since been healing well with no further intervention required.

Figure 3 Findings of the hematoma on laparoscopy. 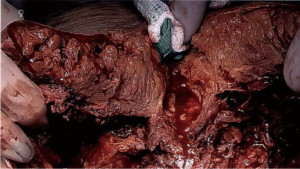 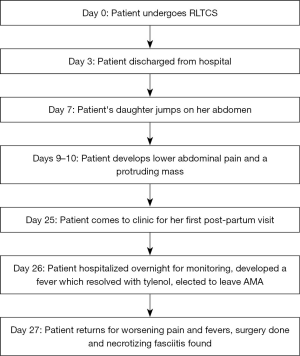 The rectus sheath is an extension of tendons from the external abdominal oblique, internal abdominal oblique, and transversus abdominus muscles which enclose the rectus abdominis. This sheath contains the neurovascular supply of the anterior abdominal wall including the superior and inferior epigastric arteries and their branches. Most of the RSH arise from the inferior epigastric artery. Some mechanisms of action that have resulted in a hematoma are related to direct muscle trauma, contraction of the muscle, and shearing/straining stresses (1,2). The most common causative factors in pregnant patients have been found to be coughing and labor, with blunt trauma only accounting for 8% of cases found in the literature (3). In our case, the only event that the patient was able to recall was the direct trauma caused by her toddler. RSH from abdominal wall trauma in non-pregnant patients is still not common; one emergency department found abdominal wall injuries were only found in 9% of patients after blunt trauma and of these only 28% were RSHs (4). Furthermore, the presentation of the severity of the symptoms did not correlate with her clinical picture.

Pregnant and immediate post-partum patients are at a greater risk for this occurrence given the combination of increased muscle stretch and intraabdominal pressure (3,5). The surgical trauma of a cesarean section also places these patients at an increased risk. The duration of heightened risk is unknown for pregnant and post-partum patients. The exact incidence of RSHs during pregnancy has been difficult to estimate as most data has been in case reports. We unfortunately did not find any literature in PubMed that matched with a post-cesarean RSH and necrotizing fasciitis.

RSH is difficult to differentiate from other causes of an acute abdomen in the peripartum period. Furthermore, its rarity compared to other obstetric complications makes it a greater challenge in diagnosis. The mortality of this condition is reported to be 13% in pregnant patients and as high as 50% for the fetus (1). An incorrect initial diagnosis is associated with increased rates of exploratory laparotomy, cesarean-section delivery, prematurity, and perinatal death (3,5). Therefore, early recognition and intervention are critical to reduce maternal and perinatal morbidity/mortality.

The most common clinical presentation the clinician should be aware of is a palpable abdominal mass with associated pain (1). Depending on its severity, RSH can also be accompanied by ecchymosis, peritoneal signs, nausea, vomiting, fever, and hypotension. Once the clinician is suspicious of RSH due to these presentations then imaging can confirm the diagnosis. Prior to the ready availability of diagnostic sonography RSHs were frequently misdiagnosed (3). We therefore recommend ultrasound as the first step in diagnosis, as done with our patient. If sonography findings are limited then reflexing to CT is appropriate.

Treatment of RSH should be targeted based on the size, expansion, hemodynamic stability of the patient, and presentation of the hematoma (1). The hematoma grade can be one indicator for required treatment. Our case report is consistent with RSH II as the clot was found within the muscle and extended to the fascia transversalis without hemoperitoneum. RSH II are routinely managed with close observation, rest, analgesics, cold compresses, blood transfusion and discontinuation of any anticoagulant (3,6). Our patient’s conditioned proved more severe than expected for her RSH grade. This could have been recognized sooner if the patient had a longer initial inpatient observation. The duration of observation should depend on the patient’s clinical picture, hemodynamic status, and comorbidities. Rapid deterioration is an indication for surgical intervention.

We attempted conservative management but unfortunately her hematoma leads to an infection. We are unsure about the mechanism of why she developed necrotizing fasciitis especially since there was such a delayed presentation from the sentinel event. A potential scenario is that her tissue was already injured by the lack of perfusion due to injury to the epigastric vessel as well as ischemia by the mass effect from the hematoma that ultimately got infected. In our case, the WBC and the clinical picture did not match with the severity of the case until we performed the surgery.

The literature reports that in most of the cases RSH should be managed conservatively. However, based on our experience, we recommend prompt aggressive treatment should be initiated to prevent further complications even with minimal signs and symptoms of infection.

Reporting Checklist: The authors have completed the CARE reporting checklist. Available at http://dx.doi.org/10.21037/acr-20-130

Conflicts of Interest: All authors have completed the ICMJE uniform disclosure form (available at http://dx.doi.org/10.21037/acr-20-130). Dr. RES reports other from Boston Scientific, outside the submitted work. The authors have no conflicts of interest to declare.