Bone hemangiomas account for approximately 1% of primary bone tumors, and 60% to 80% of bone hemangiomas arise from the skull or the vertebral column (1,2). The rib cage is an extremely uncommon location for hemangiomas, with few cases reported in the literature (3). While some lesions have a characteristic appearance on imaging that is highly suggestive of the diagnosis, a final diagnosis can only be obtained from the histological analysis. A preoperative biopsy, however, is not recommended. Given that the malignancy rate is 50–89% among primary rib tumors and the lack of evidence to help guide treatment, the majority of previously reported cases have been managed with surgical resection (4,5). In this report, we describe a case of rib hemangioma incidentally discovered during the workup of a cerebrospinal fluid (CSF) leak and discuss the rationale of non-operative management for selected cases that introduces a novel perspective for the management of rib hemangioma to the literature. We present the following case in accordance with the CARE reporting checklist (available at http://dx.doi.org/10.21037/acr-20-144).

A 23-year-old female with a history of chronic migraines was incidentally found to have a bone tumor on the left third rib. The patient had presented to the emergency department with the complaint of a severe migraine, refractory to analgesics. Physical examination at the time was unremarkable. Acute intracranial pathology was excluded on head computed tomography (CT), and brain magnetic resonance imaging (MRI) demonstrated findings of intracranial hypotension concerning for a CSF leak. A spinal MRI was then obtained, revealing a meningeal diverticulum on the right aspect of the T10-T11 vertebrae, as well as a left third rib tumor. The lesion was 4.8 cm × 3.2 cm, expansile, solitary, and arising from the posterior aspect of the third rib. The tumor appeared to be fat-containing, had multiple vascular flow voids, did not enhance with contrast, and exhibited high signal intensity on the T2-weighted MRI series (Figure 1A). The lesion was further characterized with a CT scan (Figure 1B) and felt by our radiologist to be an intraosseous hemangioma. The patient was treated with a blood patch to relieve the CSF leak and referred to our clinic following relief of her migraine symptoms.

Figure 1 Radiographic appearance of an intraosseous hemangioma of the rib. (A) T2-weighted MRI series reveals an expansile, fat containing lesion in the posterior aspect of the third rib. (B) CT imaging reveals a benign appearing lesion with a honeycomb core.

Given the uncertain etiology of the tumor, the patient was offered en bloc resection of the mass. We did not pursue a preoperative biopsy due to the increased risk of bleeding, which was a complication in a previous report (5). Arterial embolization of the feeding blood vessels has been previously described to decrease the risk of bleeding during the operation; this strategy was attempted in our case yet was unsuccessful due to extensive collateral vessels arising from the aorta (5,6). The patient was brought to the operating room, intubated with a dual-lumen tube, and placed in right lateral decubitus position. A left posterolateral thoracotomy was made in the fifth intercostal space with preservation of the serratus anterior muscle. Single lung ventilation was achieved, and the lesion was easily identified. The posterior aspect of the left third rib was resected. Chest wall reconstruction was not seen necessary due to the small defect after resection. No complications were encountered in the postoperative period, and the patient was discharged to home on the fifth postoperative day.

Gross examination of the specimen revealed a firm, well-circumscribed mass measuring 5.0 cm ×3.8 cm × 2.5 cm, arising from the medullary cavity of the third rib (Figure 2A). Histological examination revealed a tan-yellow intraosseous mass expanding the periosteum, directly underneath the pleural surface with neither gross necrosis nor soft tissue invasion (Figure 2B). The final pathological diagnosis was an intraosseous hemangioma.

Figure 2 Gross and pathological appearance of the surgical specimen. (A) Gross analysis of the specimen revealing a tan-yellow, well-circumscribed mass arising from the medullary cavity and expanding the periosteum. (B) Microscopic examination of the surgical specimen demonstrating bone marrow contents and numerous thin-walled blood vessels without atypia (H&E, 100×).

Four weeks after the operation, the patient denied any symptoms, and her physical examination was unremarkable. A follow-up chest X-ray was obtained and did not reveal any pathologies such as a pneumothorax or pleural effusion.

Rib hemangiomas have largely been reported as incidental findings, although there are reports of symptomatic presentations, such as chest pain and swelling, shortness of breath, back pain, pleural effusion, intercostal paresthesia, and thoracic outlet syndrome (4,5,7-10). In our case, the hemangioma was incidentally found during the workup of a CSF leak. CT imaging will reveal a well-circumscribed, expansile intraosseous mass containing osteolytic areas and coarsened trabeculae, which often referred as honeycomb appearance (11-13). Although it is characteristic to skull hemangiomas, a rib hemangioma may also display sunburst calcifications (12,14). Cortical disruption is sometimes seen, and while this may be concerning for malignancy, this finding has been seen in some lesions that ultimately were found to be benign intraosseous hemangiomas (8,11,15,16) (Table 1). MRI is an important adjunct, as can be seen in our case (Figure 1A). T1-weighted images highlight the fatty content and reticular architecture of the medullary component, and T2-weighted images will reveal a hyperintense lesion due to abundant large vascular channels (5,14). Some of the above imaging findings can also be seen in the setting of malignant tumors, such as chondrosarcoma or Ewing sarcoma (12). As such, all but one prior case report have been treated with resection in order to definitively rule out cancer. 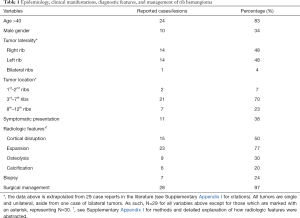 In our case, the radiologists were confident that the lesion was a benign intraosseous hemangioma, and non-operative management was considered. A tissue diagnosis would have been quite helpful and likely changed our management strategy, but several concerns prevented us from pursuing this. Some authors have cited concern for bleeding, wound infection, and disruption of the surgical bed prior to resection as the reason for forgoing a biopsy (12). Furthermore, should the tumor be malignant, then there is the added risk of seeding the needle tract with cancer (12). Given the overall malignancy rate amongst rib cage tumors and the paucity of literature on non-operative management of similar lesions, we ultimately elected to perform a resection (Table 1).

One case has been reported of the non-operative management of a rib hemangioma. Here, an open biopsy was obtained, which confirmed the radiological diagnosis, and the patient was not treated with resection. There was no malignant degeneration or size increase in one year (6). No cases have been reported that demonstrate non-operative management based upon a radiographic diagnosis alone. At first glance, it seems hazardous to non-operatively manage a mass that appears to be a rib hemangioma, as this often shares radiographic features with some malignant lesions (14). Conversely, if a lesion appears most consistent with an intraosseous hemangioma avoiding the resection also seems reasonable, as surgery does not appear to frequently change the diagnosis; there is a paucity of literature available to guide such decision making, and thus our recommendation on how to best treat similar lesions remains limited. A needle or open biopsy may prove helpful in the decision to resect or manage conservatively, and should be considered if concerning imaging findings are present, such as cortical disruption (6).

In conclusion, given our experience with this case and that of others, whereby the radiographic diagnosis was not changed by the pathologic analysis, non-operative management for similarly appearing, asymptomatic rib tumors can be considered.

Reporting Checklist: The authors have completed the CARE reporting checklist. Available at http://dx.doi.org/10.21037/acr-20-144

Conflicts of Interest: All authors have completed the ICMJE uniform disclosure form (available at http://dx.doi.org/10.21037/acr-20-144. Dr. Kreisel reports grants and personal fees from Compass Therapeutics, outside the submitted work; in addition, Dr. Kreisel has a patent Pending US patent entitled “Compositions and methods for detecting CCR2 receptors” (application number 15/611,577). pending. Dr. Puri reports other from Intuitive Surgical, outside the submitted work. The other authors have no conflicts of interest to declare.