Coarctation of the aorta with total anomalous pulmonary venous connection: a case report

Only an estimated 1.4% of total anomalous pulmonary venous connections (TAPVCs) are accompanied by coarctation of the aorta (CoA) (1). In such patients, the blood supply of the lower body is maintained primarily by saturated ductal flow. Preoperative echocardiography may not show an acceleration of flow at the isthmus (coarctation), and oxygen saturation (SpO2) at the feet may be satisfactory. This patient had a rare combination of CoA and TAPVC that was successfully repaired.

We present the following case in accordance with the CARE reporting checklist (available at http://dx.doi.org/10.21037/acr-20-135).

A 6-day-old boy weighing 2.6 kg with a diagnosis of supracardiac TAPVC was referred for a surgical correction. He had no past interventions and genetic disorders. A chest X-ray suggested significant pulmonary venous obstruction, and preoperative echocardiography revealed that the connecting veins from the common pulmonary venous chamber were separately inserted into the innominate vein and right superior vena cava. The atrial septal defect (ASD) was 6.7 mm in diameter (Figure 1). The velocity of the tricuspid regurgitation and the convex shape of the interventricular septum indicated high right ventricular pressure. There was a large patent ductus arteriosus (PDA) (Figure 2). Prostaglandin was not administered. The aortic arch and the descending aorta had different diameters (Figure 3). The percutaneous SpO2 measured at the feet was 98%, and peripheral perfusion was maintained without an increase in lactate. No flow acceleration was detected in the preductal descending aorta (Figure 4). A TAPVC repair was the only planned procedure due to the fact that TAPVC rarely occurs with a coexistent CoA and these clinical findings. As the radial artery was too narrow to insert an arterial line in the upper extremity, an arterial line was placed only in the lower extremity during the procedure. After performing a median sternotomy, the PDA was ligated, but the ligation was removed following an immediate drop in the blood pressure at the feet to about 30 mmHg, which led to the suspicion that the TAPVC was accompanied by a CoA because the size of the ASD would be expected to ensure an adequate blood flow to the lower body in the absence of the PDA. The surgical plan was switched to repair the CoA first and then correct the TAPVC. A 3.5-mm GoreTex tube (W.L. Gore & Associates, Flagstaff, AZ) was anastomosed to the right innominate artery. Cardiopulmonary bypass with high-flow regional cerebral perfusion was established with this tube and bicaval cannulations (2). The temperature was cooled to 28 °C, and the narrowed segment was excised under cardiac arrest. The aortic arch was reconstructed with an end-to-end anastomosis using 7-0 Prolene sutures (Ethicon, Somerville, NJ). The TAPVC was corrected during rewarming. There were two separate vertical veins, one drained into the innominate vein and the other drained into the superior vena cava, both of which were ligated. The posterior wall of the left atrium was approached from the right side after opening the common chamber, and an anastomosis was performed between the common chamber and the left atrium. The patient was discharged without a pulmonary venous obstruction or stenosis at the anastomosis site of the aortic arch (Figure 5). 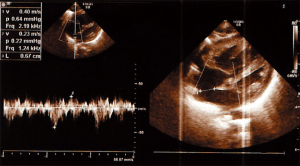 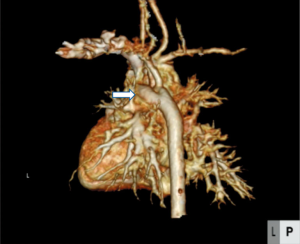 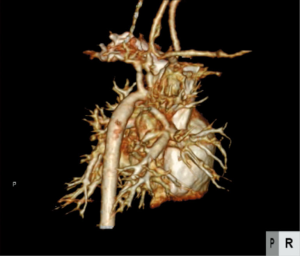 Figure 3 A preoperative CT image showing that the aortic arch and the descending aorta have different diameters. 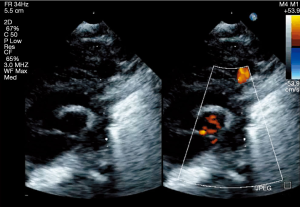 Figure 4 Preoperative echocardiography did not detect acceleration of flow within the preductal portion of the descending aorta. 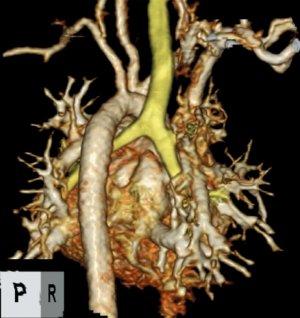 Figure 5 A postoperative CT image showing that the aortic arch and pulmonary venous return were reconstructed without obstruction.

TAPVC rarely occurs with a coexistent CoA; only 6 of 422 patients with TAPVC (1.4%) have previously been reported (1,3,4). de Leval et al. reported a case of a 12-day-old male neonate with a successful one-stage correction of a TAPVC to the left superior vena cava associated with a persistent ductus arteriosus and CoA (4). Doksöz et al. reported repair of a CoA and infracardiac TAPVC in a 7-day-old girl (1). In that case, echocardiography with Doppler color flow mapping was diagnostic, but preoperative did not find flow acceleration. The hemodynamic status of children with TAPVC generally includes low systemic output because of pulmonary venous obstruction and a relatively narrow ASD. In addition, CoA can cause severe lack of blood flow to the lower body. Despite the presence of CoA, a wide open ductus arteriosus can support systemic flow to the lower body, and pulmonary hypertension that increases flow to the lower body may prevent an obvious increase in lactate concentration. Under those conditions, preoperative echocardiography may not show a flow acceleration, and the CoA may not be suspected, as in our patient. Our experience with this patient shows why surgery must be planned and performed with care when a TAPVC and a large PDA coexist.

Although the size of the ASD in our patient was believed to adequately maintain blood flow to the lower body following closure of the PDA, it has not been shown whether a 6.7-mm-diameter ASD can maintain adequate blood flow to the lower body without a PDA. Therefore, we recommend inserting arterial lines in both the upper and lower extremities before beginning a TAPVC repair procedure even if there is only a slight possibility of a CoA. If that is not possible, then intraoperative confirmation of a difference in blood pressure in the ascending aorta and the lower body is an option. Initial repair of the TAPVC followed by a test clamp applied to the PDA is another option.

In this patient, surgical repair of a TAPVC coexisting with CoA was successful. The presence of CoA can be missed in patients with a wide open ductus arteriosus that can maintain systemic flow to the lower body. Preoperative echocardiography may not detect a flow acceleration that would lead to suspicion of the CoA. Caution is necessary in patients with a TAPVC and a large PDA.

Reporting Checklist: The authors have completed the CARE reporting checklist. Available at http://dx.doi.org/10.21037/acr-20-135

Conflicts of Interest: All authors have completed the ICMJE uniform disclosure form (available at http://dx.doi.org/10.21037/acr-20-135). The authors have no conflicts of interest to declare.

Ethical Statement: The authors are accountable for all aspects of the work in ensuring that questions related to the accuracy or integrity of any part of the work are appropriately investigated and resolved. All procedures performed in studies involving human participants were in accordance with the ethical standards of the institutional and/or national research committee(s) and with the Helsinki Declaration (as revised in 2013). Written informed consent was obtained from the patient’s parents (the corresponding author got consent and made it).