Two parathyroid adenomas in a Saudi female on hemodialysis diagnosed with tertiary hyperparathyroidism: a case report

More than 90% of chronic renal failure patients develop Secondary Hyperparathyroidism (HPT) (1). This is due to several factors: first is phosphate retention due to loss of nephrons function; second is vitamin D resistance by decreased responsiveness of the uremic intestine; and third is the inability of kidneys to hydroxylate 25-hydroxycholecalcifrol (2). These factors will predispose nodular hyperplasia due to the prolonged stimulation of parathyroid cell growth due to high phosphate, low calcitriol, and hypocalcemia. Over time, and after the initiation of hemodialysis, persistent parathyroid hyperfunction will result in the development of a Tertiary HPT from the Secondary hyperplasia (3). The development of multiple parathyroid adenomas in a patient with Tertiary HPT who is on hemodialysis is rare. There is only one report case in Japan in 1982 of a known Tertiary HPT patient on hemodialysis with a parathyroid adenoma (4). A similar case of a Secondary HPT with an adenoma was reported in 2014 (5). To the best of our knowledge, this case was the first to be described as “true” Tertiary HPT with multiple parathyroid adenomas, Secondary hyperplasia of the remaining two parathyroid glands and a PTH level reaching 4,267.2 pg/mL. For clearness, we present this case following the CARE reporting checklist (available at http://dx.doi.org/10.21037/acr-20-115).

A 51-year-old female on hemodialysis three times per week for the past seven years was admitted to the endocrine surgery department in July of 2018 at the Al-Hada Armed Forces Hospital in Taif, Saudi Arabia.

She presented with complaints of bone aches in her hip and lower limbs, and she experienced pain during walking. Her labs showed that PTH reached 4,267.2 pg/mL, her calcium was 2.82 mmol/L, and phosphate was 0.84 mmol/L. On physical examination, the patient appeared pale and underweight, and there was no tenderness over bony prominences. The skin was normal with no cutaneous purpuritic lesions or ischemic necrosis. Her heart and chest were normal. ECG showed left ventricular hypertrophy with borderline left axis deviation. There was no history of bone fractures or renal stones, and she was diagnosed with Tertiary Hyperparathyroidism. 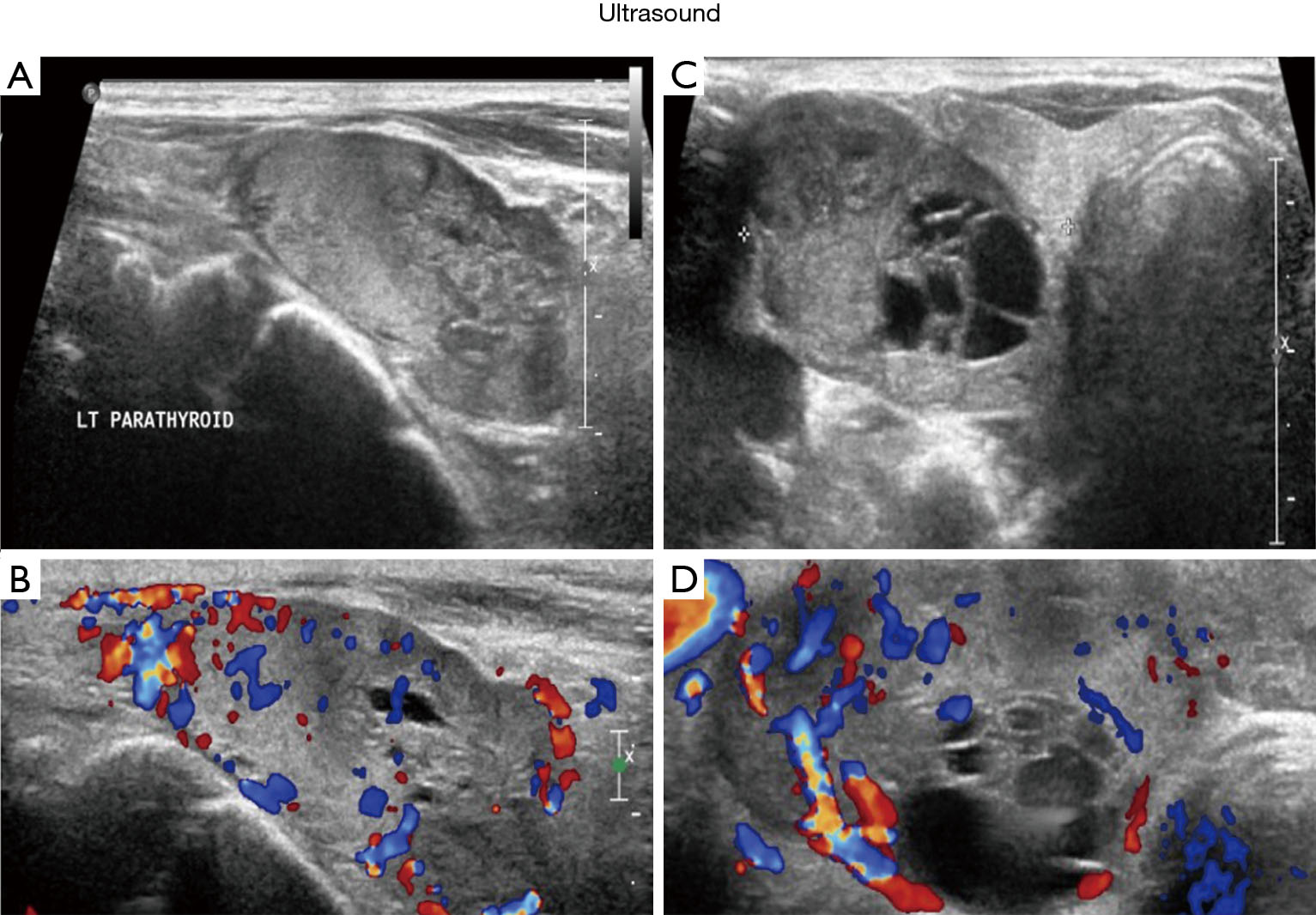 Figure 2 99mTc-sestamibi scan findings. (A) Sagittal view. (B) Coronal view early and late images revealed two large areas of retained uptake seen over the right side behind the mid of the right lobe, and on the left side more posterior and below left lobe (para-esophageal) with hypodense (fatty) and hyperdense (calcification) areas.

She has been taking hypertensive medications for 14 years. Proteinuria was first discovered at the age of 39 while she was in her 36th week of her last pregnancy. Five years later she was diagnosed with renal failure, and she then started hemodialysis in 2011. Two years after regular hemodialysis, she was diagnosed with epilepsy, which has been controlled with carbamazepine.

On the 31 of July 2018, bilateral neck exploration was done with total parathyroidectomy and autotransplantation in the sternocleidomastoid including total thyroidectomy. Total thyroidectomy was performed due to the presence of calcifications in both lobes. Four enlarged parathyroid glands were resected (Figure 3), and frozen sections specimens were sent to histopathology. Our patient didn’t have any adverse or unanticipated events, not during the surgical procedure or in the postoperative period. 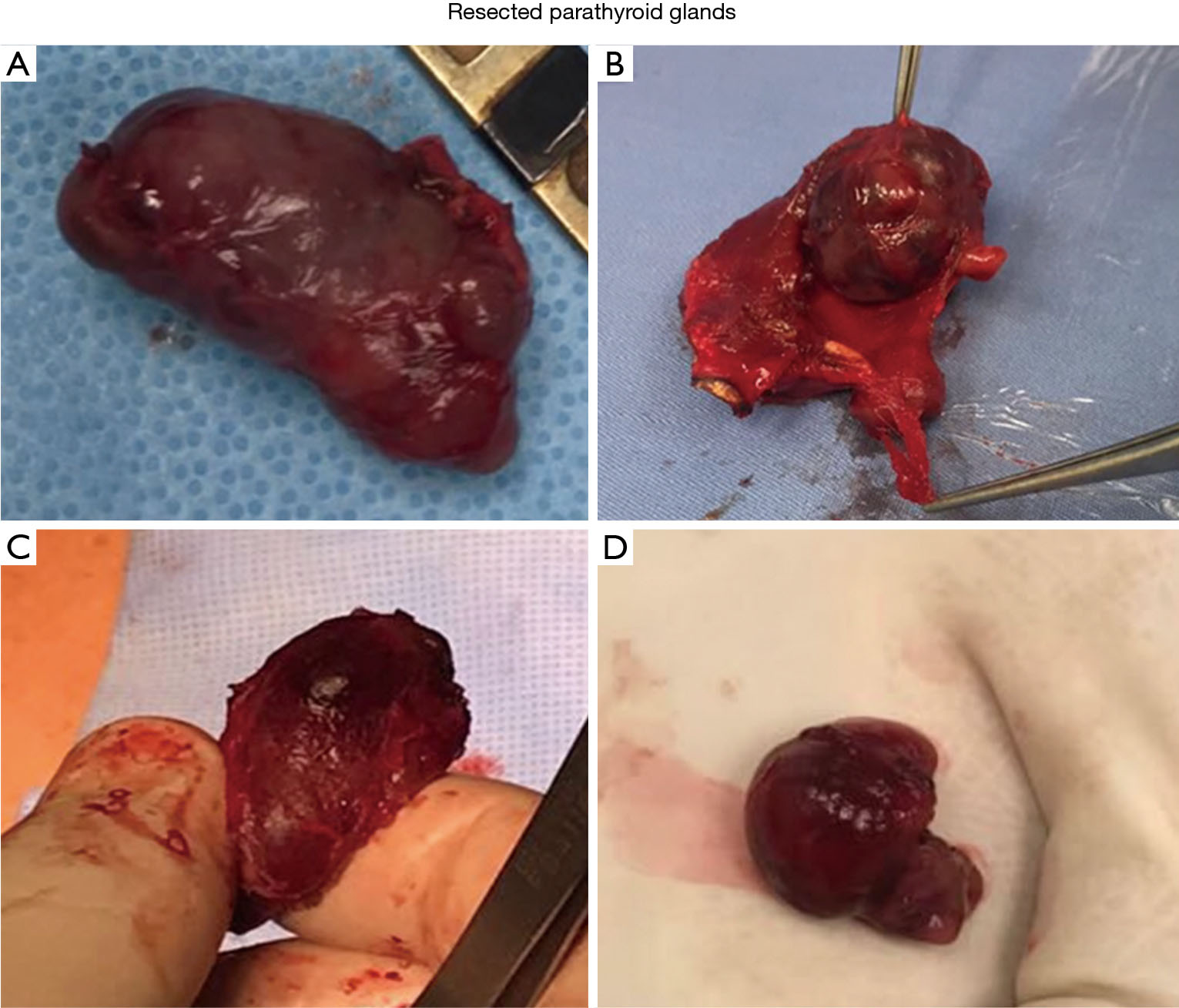 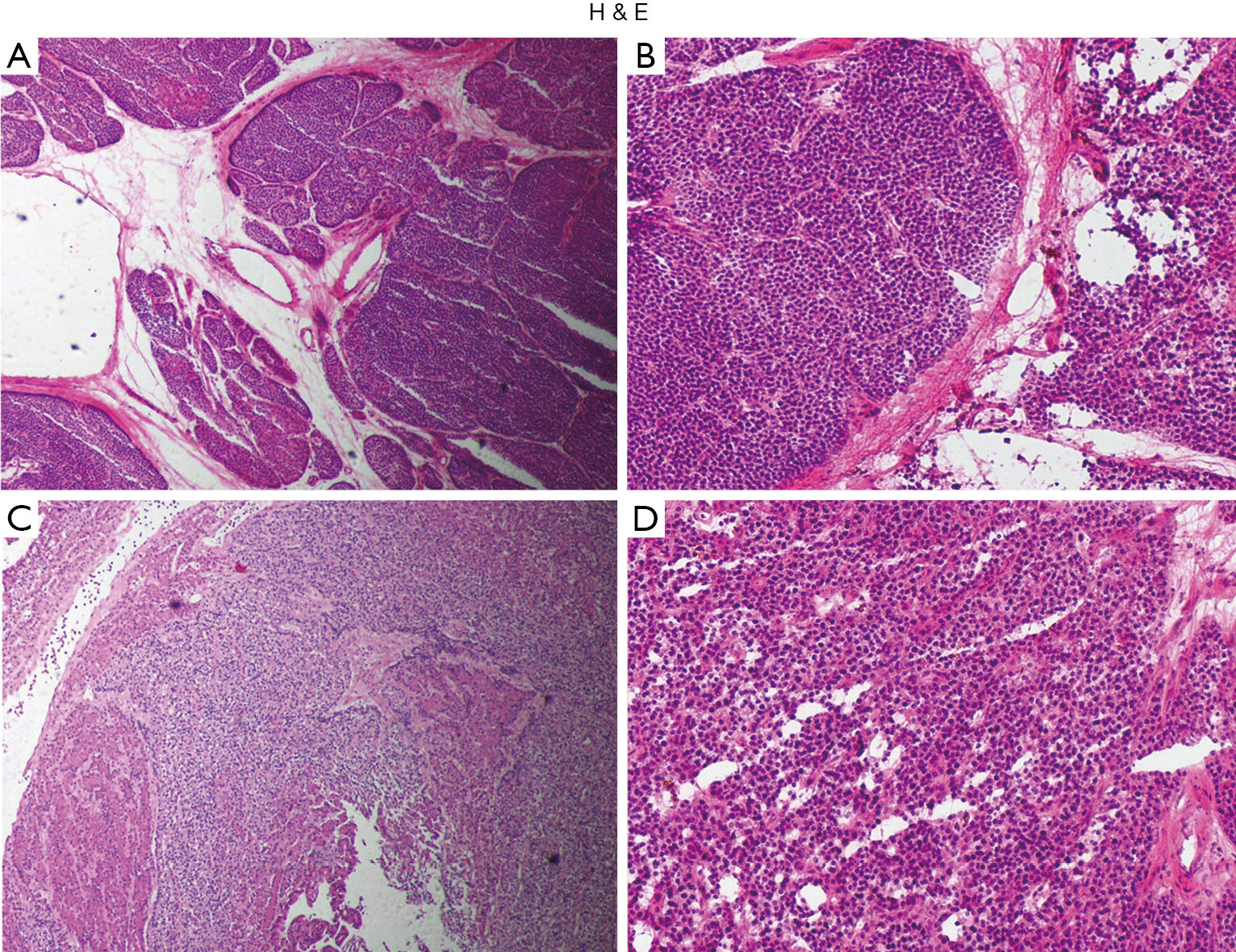 We tracked all available parathyroid hormone, calcium and phosphate levels progression in our case from 2011 to the time of surgery in 2018, and we plotted their progression through the years (Figure 5).

Figure 5 The progression of parathyroid hormone “green line”, Calcium “yellow line” and phosphate “blue line” was recorded throughout the years.

The PTH obviously changes with a steep progression due to poor compliance of cinacalcet. The first session of dialysis was on October 2011. Her PTH was 459 pg/mL with normal phosphate and calcium levels. Her calcium was at its lowest levels in August 2012 with an elevated phosphate and PTH value of 1,195 pg/mL. These values ruled out the preexistence of parathyroid adenoma. At the beginning of 2013, PTH reached 2,065 pg/mL for the first time with elevated calcium and phosphate levels indicating that PTH is not responsive to calcium levels. This is a clear sign of the development of severe parathyroid hyperplasia with autonomous secretion of PTH. The PTH showed the lowest values in August of 2014, March of 2015, and March of 2016: 526, 552, and 429.4 pg/mL respectively. These values were accompanied by a sudden drop of previously elevated phosphate levels. From April of 2017, calcium and phosphate were constantly high with a PTH around 2,000 pg/mL. This was when she began to have bone aches. On July 2018 she decided to seek medical attention. Her PTH was 4,264 pg/mL with the lowest value of phosphate to ever be recorded at 0.84 mmol/L. A timeline outlining the most important documented medical history, laboratory results and therapeutic interventions is shown in the figure below (Figure 6). 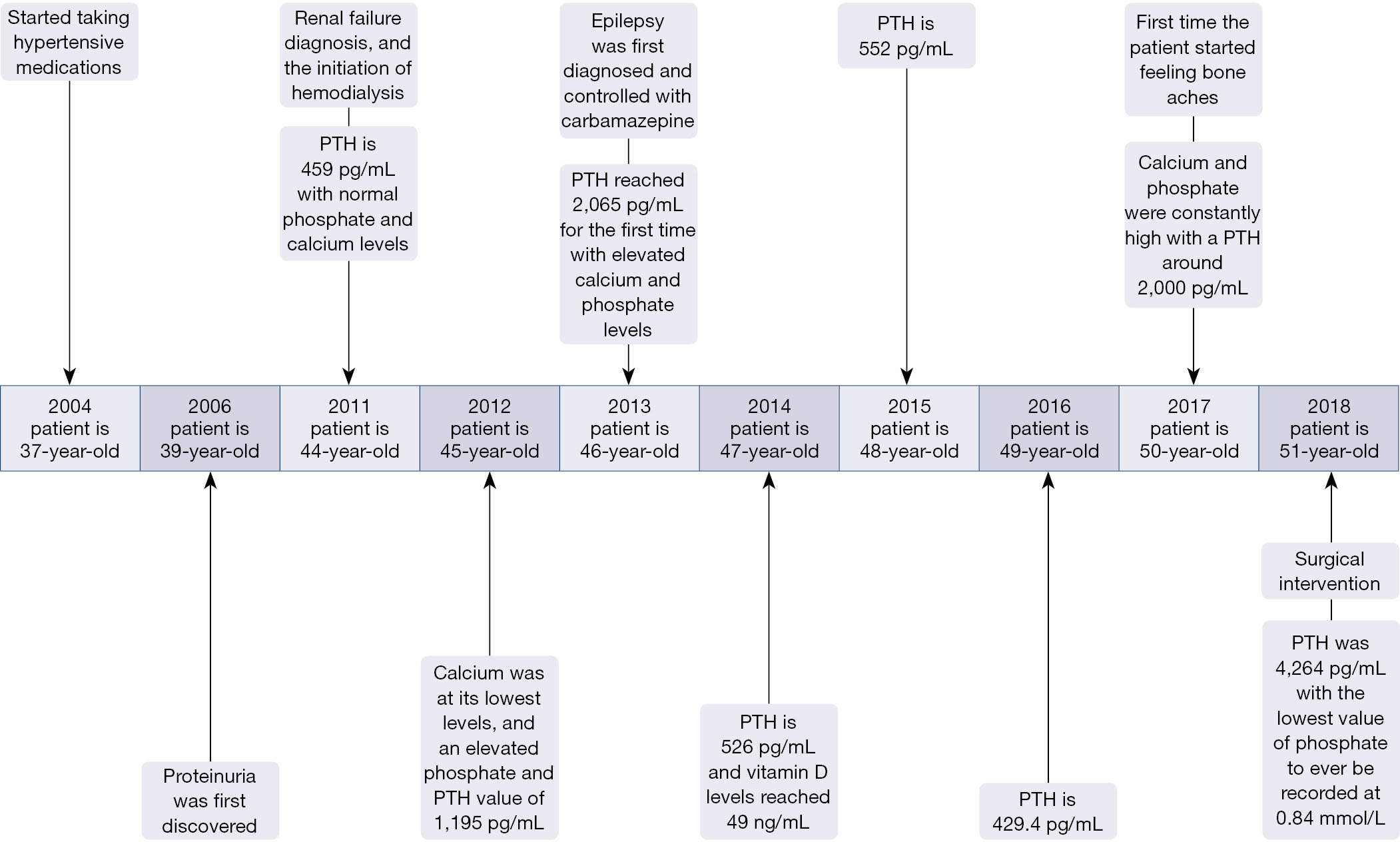 Figure 6 A timeline outlining the most important documented medical history, laboratory results and therapeutic interventions since 2004 until the time of surgical intervention in 2018.

The study was conducted in accordance with the Declaration of Helsinki (as revised in 2013). Written informed consent was obtained from the patient for publication of this Case report and any accompanying images. A copy of the written consent is available for review upon request.

Tertiary hyperparathyroidism is classically caused by hyperplasia of all four glands, and there is an insensitivity to the suppression of PTH by calcium and vitamin D due to the low expression of CaSR and VDRs (6). In our patient the fluctuation of vitamin D levels did not influence the PTH. Clearly PTH kept increasing despite the change in vitamin D levels through the years (Figure 7). 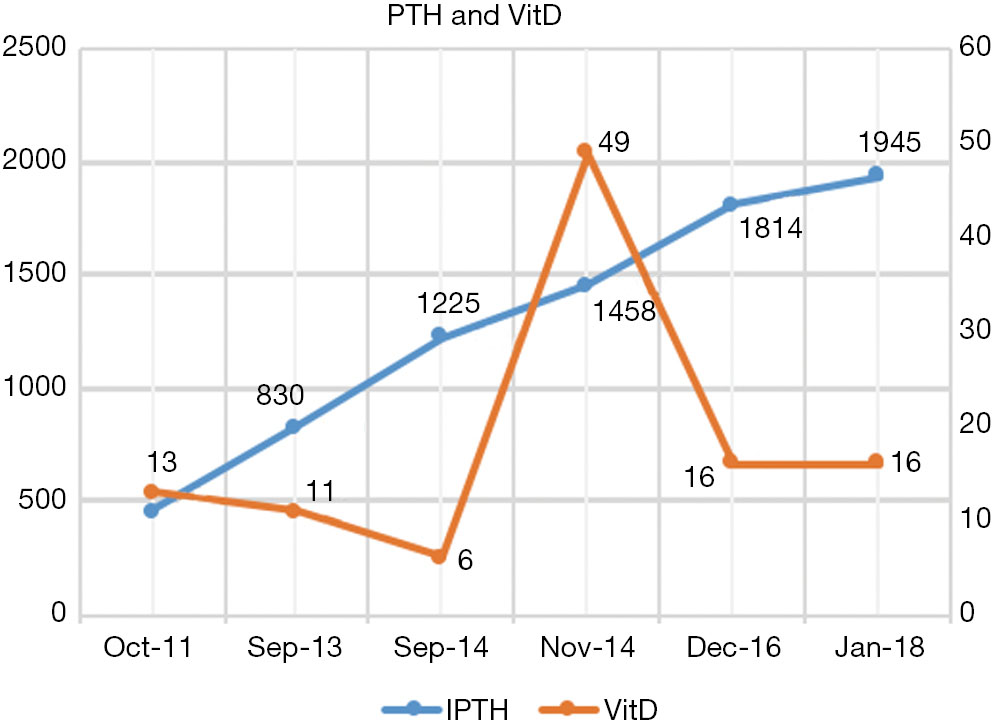 Figure 7 Vitamin D “orange line” and parathyroid hormone “blue” values were compared to determine if Vitamin D had its normal inhibitory effect on PTH throughout the years.

Our patients’ vitamin D levels were generally low except for one event on November 2014, which is most likely due to increased intake of vitamin D supplements. Even though the vitamin D levels reached 49 ng/mL, at this point, the PTH was not inhibited. This indicates that calcitriol’s normal inhibitory effect on PTH secretion and parathyroid gland growth was diminished (7).

In secondary and tertiary HPT, the increase in the function of the parathyroid gland is due to the overgrowth of the gland mass rather than a change in the set point of PTH (10). Neoplastic transformations can occur in patients with tertiary HPT leading to overgrowth by a monoclonal parathyroid adenoma (6). Studies of patients who did renal transplant indicate that over 20% of patients may have single or double adenomas as the underlying pathology of the kidney failure (11,12). But in our case the switch of monoclonal proliferation happened after the establishment of a kidney failure, how it occurs is not well understood, but markedly reduced vitamin D receptors in areas of nodular transformation maybe one of the causes (13). The development of multiple parathyroid adenomas in a patient with tertiary hyperparathyroidism who is on hemodialysis is rare. Only one report is known (from Japan in 1982). This was a known tertiary hyperparathyroidism patient on hemodialysis with parathyroid adenoma (4). There was a similar case of secondary hyperparathyroidism with an adenoma in 2014 (5). This study lacked long-term follow-up, which is one of the limitations to this case report, the patient didn’t follow-up regularly hindering the process of recording long-term laboratory parameters.

To the best of our knowledge, the case we describe here is the first case in Saudi Arabia of “true” tertiary HPT patient on hemodialysis for seven years with double parathyroid adenomas that developed after the establishment of kidney failure, and with secondary hyperplasia of remaining two parathyroid glands and a level of PTH reaching 4,267.2 pg/mL.

We would like to acknowledge Dr. Hamdan Saad Alaamri for general guidance and we are extremely grateful for the Research Ethics Committee and the staff at the radiology department at Al-Hada Armed Forces Hospital Taif city, Saudi Arabia for helping us obtain the required data and ethical approval.

Reporting Checklist: The authors have completed the CARE reporting checklist. Available at http://dx.doi.org/10.21037/acr-20-115

Conflicts of Interest: All authors have completed the ICMJE uniform disclosure form (available at http://dx.doi.org/10.21037/acr-20-115). The authors have no conflicts of interest to declare.

Ethical Statement: The authors are accountable for all aspects of the work in ensuring that questions related to the accuracy or integrity of any part of the work are appropriately investigated and resolved. Approval to collect the data was obtained from the research ethics committee of the Medical Services Department of the Scientific Research Center in Al-Hada Armed Forces Hospital, Taif, Saudi Arabia. The Ethical approval is available upon request. The study was conducted in accordance with the Declaration of Helsinki (as revised in 2013). Written informed consent was obtained from the patient for publication of this Case report and any accompanying images. A copy of the written consent is available for review upon request.