Urrets-Zavalia syndrome is a rare disease characterized by fixed dilated pupil (1). It is usually caused by penetrating keratoplasty (PK), cataract surgery, phakic posterior chamber intraocular lens, argon laser peripheral iridoplasty, and so on (2-5). Urrets-ZavaIia syndrome is easy to be misdiagnosed or missed in clinic because of few positive signs (6). To the best of our knowledge, there are few reports of Urrets-ZavaIia syndrome caused by intraocular metallic foreign body. Here, we report a case of Urrets-ZavaIia syndrome caused by an intraocular metallic foreign body which was discovered accidentally. The patient has typical symptom of pupil dilatation and ankylosis of the left eye, but the history of the patient complained is unclear at first. Above all, the case is easily to be misdiagnosed with retinal or visual pathway diseases.

We present the following article/case in accordance with the CARE reporting checklist (available at http://dx.doi.org/10.21037/acr-19-157).

A 22-year-old male patient, he himself suspected of being hit by something in the left eye half a month before he visited hospital. He felt foreign body sensation and conjunctival congestion of the left eye in the first few days. The right eye was normal. He did not see the doctor for treatment at first, and just used chloramphenicol eye drops by himself.

Half a month later, the patient felt mild decrease of vision of his left eye, then he went to the local hospital. After the first examination of an ophthalmologist, he was found of mydriasis of the left eye (Figure 1), and light reflection is slow. The vision of the left eye was 16/20 compared the right eye 20/20. The vitreous humor was slightly turbid of the left eye. The intraocular pressure was 15 mmHg in each eye. No other abnormalities were found. There was no medical, family, and psycho-social history including relevant genetic information about this patient. Because of few other positive signs, the ophthalmologist suggested the patient go to the neurology department for further examination. In the neurology department, the patient had brain magnetic resonance imaging (MRI) examination which shouldn’t be performed actually. The MRI showed some artifacts and abnormal signals in the left eye. But MRI didn’t reveal any clear foreign body in the left eye (Figure 2). Because of the abnormal images in MRI, the patient was suggested back to the ophthalmology department to check the left eye. Then the ophthalmologist examined the patient again. It was still no other positive findings in the ophthalmology department. There was no swelling and congestion in both eyes. It was normal about eye movement and eye size. In the left eye, the corneal was transparency. It was normal about anterior chamber (aqueous humor). The iris had no pigment loss and rupture, the pupil was circular and centered with a 7-mm-diameter, but direct and indirect light reflection was slow. The lens was transparent. The vitreous humor was slightly turbid and the fundus was even clear. And there was no positive sign in the patient’s right eye. Even in the A/B-ultrasound examination, there was no abnormality in both eyes, which didn’t show any clear abnormal image (Figure 3). 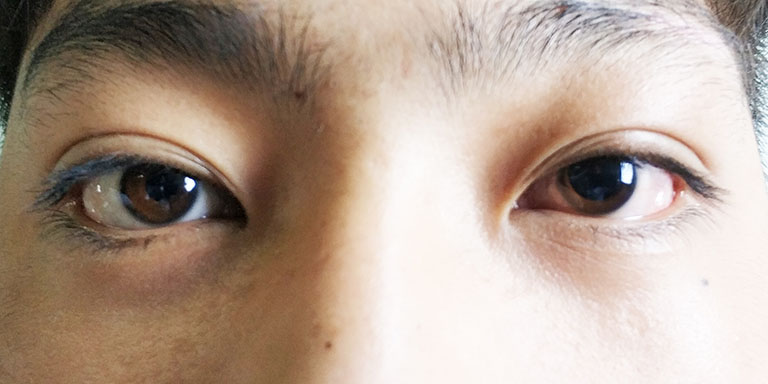 Figure 1 The pupil of the left eye is circle and centered with a 7mm-diameter, compared the right eye 3-mm diameter. 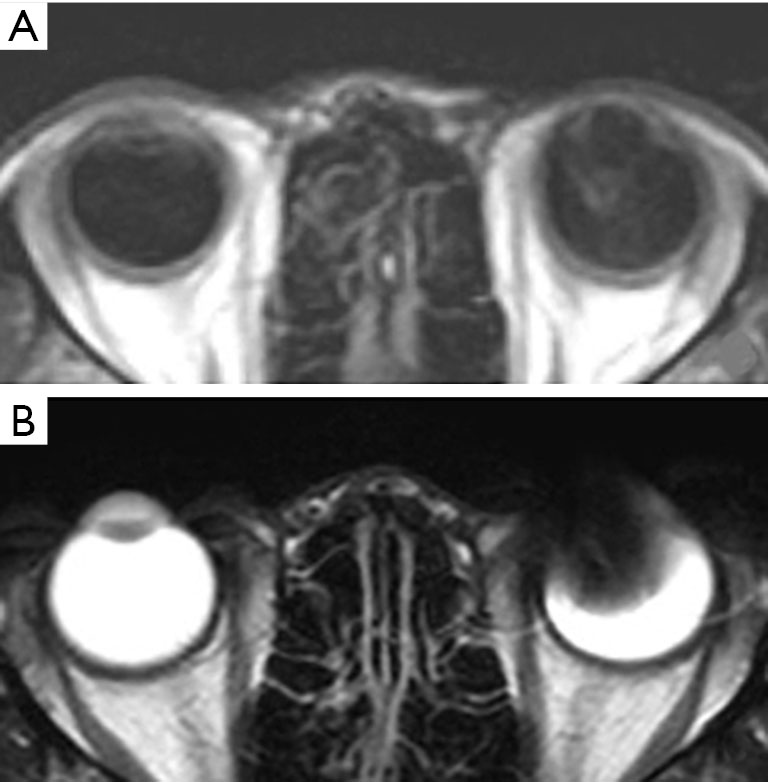 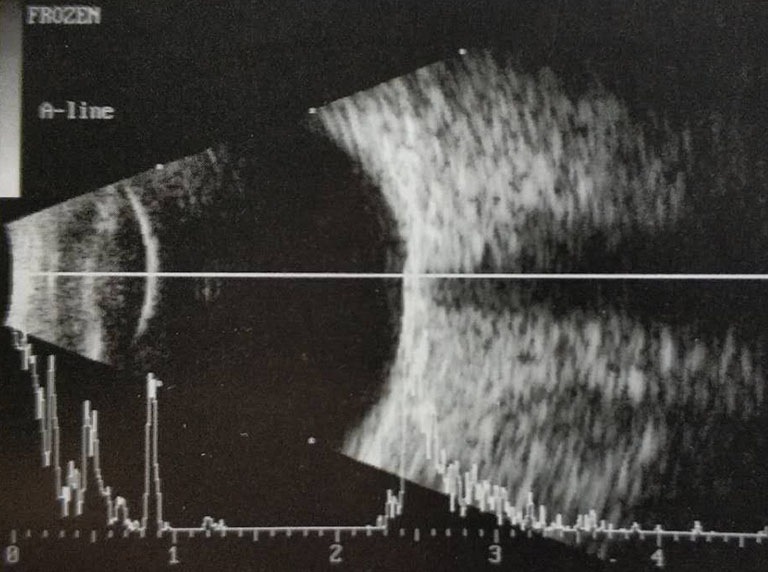 Figure 3 There is no abnormality in the A/B-ultrasound examination of the left eye.

After that, the patient underwent the orbital CT examination. Then a high-density foreign body like metal in the left eye was detected by CT scan (Figure 4). Obviously, the pupil dilatation and ankylosis of the left eye was from the intraocular metallic foreign body. At that moment, the ophthalmologist considered a rare disease in clinic: Urrets-ZavaIia syndrome, because the patient had a typical sign of pupil dilatation and ankylosis of the left eye which was the characteristic of Urrets-ZavaIia syndrome. Then the patient was recommended for eye surgery. After surgery, the foreign body was removed and determined to be iron (2.5 mm × 2 mm × 2 mm). Through a few days of postoperative treatment, the patient’s left eye recovered well. 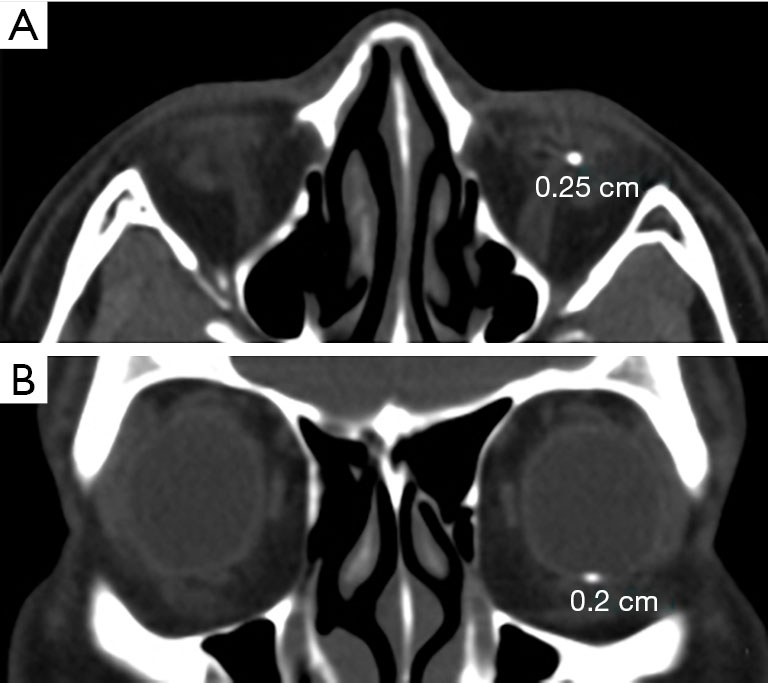 For some reason, the patient was followed up for only 3 months after surgery. At the last examination, we found that the pupil of the left eye had not shrunk and the light reflex had not return to normal, but the corrected visual acuity returned to the level of 16/20. Figure 5 is the timeline of the patient’s medical experience.

In this case, the patient had foreign body sensation and conjunctival congestion of the left eye at the first few days. The patient said he suspected being hit by something in the left eye half a month ago. If the ophthalmologist raised his guard and asked more details about the history of trauma, it may arouse to suspect the possibility of an intraocular foreign body. If so, a direct CT scan may be performed earlier. But the ophthalmologist didn’t notice the patient’s history of suspicious trauma. The first ophthalmic examination only contained visual acuity, intraocular pressure, slit lamp and direct ophthalmoscope examination, without further examinations. The result of the first ophthalmic examination only revealed the mild loss of vision, the pupil dilatation and the slightly turbid vitreous humor of the left eye. The intraocular lesion was not considered until some abnormality images was detected by MRI in the neurology department. Dramatically, the patient incompletely remembered the matter of ocular trauma. He wasn’t very clear about the eye injury, because he signed the questionnaire of no metallic objects in his body before he did the MRI. So that after a further examination, the final diagnosis was determined by CT scan. Then the ophthalmologist thought of the disease, Urrets-ZavaIia syndrome. The pupil stiffness might be caused by damage to the eye tissue by metal foreign body and inflammation around it. It was possible that foreign matter entered the eyeball through the anterior sclera.

There are currently no specific treatments for diffuse pupillary atrophy. Corneal tattooing, specialty contact lenses, and artificial iris implants are options for glare reduction and appearance improvement. In focal atrophy, miotics such as guanethidine and pilocarpine have demonstrated efficacy in treating Urrets-ZavaIia syndrome and attenuating mydriasis (11). The limitation of collecting and reporting this case is that we lacked some postoperative data because the patients wasn’t followed up in the hospital as required.

In conclusion, we report a rare disease of Urrets-ZavaIia syndrome caused by intraocular metallic foreign body. It also demonstrates that the detailed history should be obtained in patients to diagnosis. And complete examination is also essential to help diagnosis especially for such rare disease.

Reporting Checklist: The authors have completed the CARE reporting checklist. Available at http://dx.doi.org/10.21037/acr-19-157

Conflicts of Interest: All authors have completed the ICMJE uniform disclosure form (available at http://dx.doi.org/10.21037/acr-19-157). The authors have no conflicts of interest to declare.