Penetrating pulmonary injury due to a thrown rusty nail while using a lawn mower: a case report

Accidents while using lawn mowers are often reported (1,2). The limbs are the most common injury locations (94.4%), and torso injuries are rare (1.5%) (1). The main causes of lawn mower accidents include falling down due to an unstable working posture, damage by a rotating blade, and thrown objects such as a missing rotating blade, stone, and metal. Injuries due to thrown objects comprise 13.2% of all accidents that occur while using lawn mowers (2). The high speed of thrown objects makes even small stones highly lethal; with blade rotation speeds reaching 3,000 rpm, a 0.5-kg object can be launched at a speed of over 300 km/h (3). Herein, we report a case of a penetrating pulmonary injury due to a thrown rusty nail while using a lawn mower.

We present the following case in accordance with the CARE reporting checklist (available at http://dx.doi.org/10.21037/acr-20-87).

A 63-year-old man without a past medical history was injured in his left precordium by a thrown object while using a lawn mower (Figure 1A,B) and visited a nearby hospital. A computed tomography (CT) image showed a left-sided pneumothorax and a pulmonary injury of the left upper lobe due to a foreign body. Pneumothorax was treated with thoracic drainage and resolved. He was transferred to our hospital on the second day after the injury. Physical examination revealed a bruise on his left precordium. His hemoglobin concentration was 15.9 g/dL; however, he was not anemic. His leukocyte count and serum C-reactive protein level were 10,880/µL and 3.47 mg/dL, respectively, therefore indicating an increased inflammatory response. A chest radiograph showed a foreign body in the left upper lung field (Figure 2A). The CT image that was obtained at our hospital showed a 3-cm-long foreign body in the pulmonary apex of the left upper lobe and a pulmonary laceration from the left precordium towards the foreign body (Figure 2B,C,D). He was diagnosed with a penetrating pulmonary injury due to a foreign body. We considered that it was necessary to remove the foreign body, and his informed consent was obtained. Video-assisted thoracoscopic surgery was performed on the day that he was transferred to our hospital. Surgical findings showed the penetrating wound in the left upper lobe and leakage of pus from its margin (Figure 3A). The foreign body was removed (Figure 3B). The whole penetrating wound was treated by partial pulmonary resection to control the infection (Figure 3C,D). The operative time was 85 minutes and only 5 mL of blood was loss. No air leakage was observed postoperatively, and the chest tube was removed on postoperative day 1. He was discharged on postoperative day 4. The timeline of treatment is shown in Figure 4. Tetanus immune globulin and tetanus toxoid were administered on the day of surgery, and tetanus toxoid was administered 2 months postoperatively to prevent tetanus. 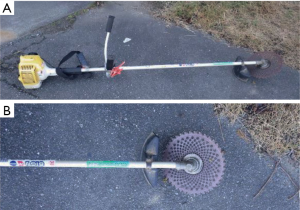 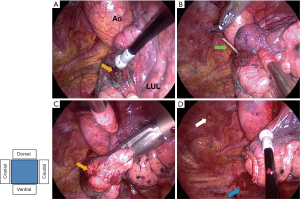 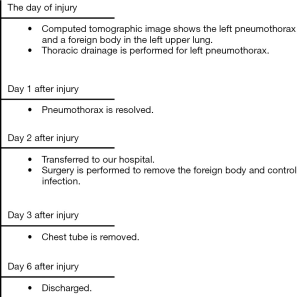 Macroscopic findings showed that the whole penetrating wound was resected and the foreign body was a 3-cm-long rusty nail (Figure 5A). Histopathological findings showed that many red blood cells and neutrophils were observed around the penetrating wound, indicating that hematoma and abscess were formed in the pulmonary parenchyma (Figure 5B,C). At the 1-year follow-up, the CT image showed no lung abscesses or empyema. 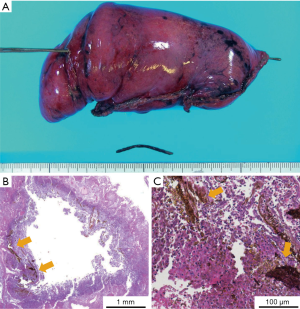 Figure 5 Macroscopic and histopathological findings of the penetrating pulmonary injury. (A) Macroscopic findings showed that the whole penetrating wound was resected and that the foreign body was a 3-cm-long rusty nail; (B,C) histopathological findings showed that many red blood cells and neutrophils were observed around the penetrating wound, indicating that hematoma and abscess formed in the pulmonary parenchyma (orange arrows, foreign bodies containing iron).

All procedures performed in this study were in accordance with the ethical standards of the institutional and national research committees and with the Helsinki Declaration (as revised in 2013). A written informed consent was obtained from the patient.

Chest injuries can be divided into penetrating and blunt force injuries. Surgery is considered essential for the treatment of penetrating chest injuries. The aims of surgery include hemostasis, evacuation of hematomas, foreign body retrieval, repair of pulmonary fistulas, and removal of contaminated tissues (4).

Penetrating pulmonary injuries are often caused by gunshots (5,6), but cases of gunshot wounds in Japan are rare (7). Penetrating pulmonary injuries are treated conservatively for most patients, and only 15% of them require surgical treatment (8); foreign body retrieval is not always performed. Pulmonary circulation is a low-pressure vascular system with a rich concentration of tissue thromboplastin in the lungs; therefore, any bleeding without major hilar vessel injuries are usually self-controlled (9). Pulmonary lacerations usually resolve in 3–5 weeks (10). Surgical procedures performed for penetrating pulmonary injuries not only include pulmonary resection but also parenchymal pulmonary sutures, in which only the margins of the penetrating wounds on the lung surface (visceral pleura) are sutured without pulmonary resection (11,12). After the wound is closed with parenchymal pulmonary sutures, an air embolism due to air entering the suture site (13) as well as lung abscess or empyema due to the remaining contaminated objects could occur (6,14). In this case, hemostasis and resolution of the air leaks were indicated by conservative treatment; however, a lung abscess formed due to foreign-object contamination. Therefore, foreign body retrieval and pulmonary resection were required. In this case, the penetrating injury was in the pulmonary apex, and pulmonary resection was simple. As this study’s limitation, whether anatomical pulmonary resection, such as lobectomy or pneumonectomy, can be considered in case of wound near the pulmonary hilum could not be determined. The choice to remove foreign bodies or not depends on the type of injury as well as the type and location of the foreign body.

Penetrating chest injuries due to thrown objects, such as in this case, are very rare but can be life-threatening. Therefore, we recommend that the torso should be protected with protective clothing while using lawn mowers. The use of protective goggles is also recommended, since ocular penetrating and perforating injuries due to thrown objects while using lawn mowers are often reported (15,16).

Reporting Checklist: The authors have completed the CARE reporting checklist. Available at http://dx.doi.org/10.21037/acr-20-87

Conflicts of Interest: All authors have completed the ICMJE uniform disclosure form (available at http://dx.doi.org/10.21037/acr-20-87). The authors have no conflicts of interest to declare.

Ethical Statement: The authors are accountable for all aspects of the work in ensuring that questions related to the accuracy or integrity of any part of the work are appropriately investigated and resolved. All procedures performed in this study were in accordance with the ethical standards of the institutional and national research committees and with the Helsinki Declaration (as revised in 2013). A written informed consent was obtained from the patient.