Thymomas are rare tumors (incidence of 0.15 cases/100,000 inhabitants) that arise from the thymus and are most commonly located in the anterosuperior mediastinum (1). These tumors represent 20% of all mediastinal masses and affect individuals between the ages of 40 and 60 years (2). Invasive thymoma are aggressive growth tumors that can contiguously invade neighboring mediastinal structures, such as superior vena cava and sometimes the heart (3). The cardiac and vascular involvement has a direct implication in the therapeutic and prognostic definition of these patients. We present a rare case of aggressive tumor invasion of left ventricle (LV) chambers and coronary arteries. The aim of this article was to discuss about differential diagnosis of acute coronary syndrome in cancer patients and to understand the role of extracardiac causes in pathophysiology of myocardium infarction. We present the following case in accordance with the CARE Guideline (4). We present the following case in accordance with the CARE reporting checklist.

A 56-year-old female patient diagnosed with thymoma B2 Masaoka IVa since 2013 had been previously submitted to oncologic treatment with local radiotherapy and different chemotherapy regimens (cisplatin and etoposide, followed by cisplatin and doxorubicin and finally cyclophosphamide). In 2015, the patient performed a cardiac magnetic resonance (CMR) that evidenced invasion of the LV and progression of disease (Figure 1). Systemic treatment was indicated, but the patient refused new chemotherapy treatment and only maintained clinical follow-up with the oncology team (for details of the course see Figure 2). She has diabetes diagnosed ten years ago and an earlier episode of deep venous thrombosis treated in 2012. 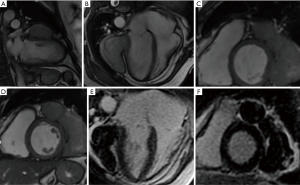 Figure 2 Timeline of the patient with a thymoma B2 Masaoka IV.

At the end of 2018, she came to the emergency care with precordial pain of severe intensity (grade 8 in 10), without irradiation, type “in tightening”, which lasted about 1 hour, associated with nausea, sweating and dyspnea. She told that she has always felt pain in her chest in the last few years since the diagnosis of the thymoma, but that the current pain was more intense than usual, which motivated her to seek the hospital. At admission, there were no relevant findings on her physical examination.

The initial electrocardiogram (ECG) showed sinus rhythm, heart beat of 77 and inverted T wave in the aVL and DI leads, with no subsequent ECG changes (Figure 3). There was an alteration in the myocardial necrosis markers during hospitalization. The initial troponin T was 0.172 ng/mL and decreased to 0.100 ng/mL after 12 hours (reference value <0.03 ng/mL), and was accompanied by a change in the creatinine kinase-MB that was 3.85 ng/mL at admission and decreased to 2.29 ng/mL after the same period (reference value <2.88 ng/mL). Transthoracic echocardiogram showed LV with discrete systolic impairment due to diffuse hypokinesia and atypical movement of the ventricular septum, left ventricular ejection fraction (LVEF) of 50% and presence of an extensive mass adjacent the free wall of the LV, with a discrete compressive effect in the heart, without hemodynamic repercussion.

After a multidisciplinary discussion, the cardiology team decided to perform a coronary computed tomography angiography (CCTA) to rule out coronary artery disease. The CCTA showed very low calcium score (CS of 01); left main (LM), left anterior descending (LAD) and right coronary artery (RCA) without stenosis; moderate proximal stenosis (50–70%) of the left circumflex coronary artery. There was also a heterogeneous expansive lesion located between the LV and the left lung that shows signs of myocardial invasion and presents a macroscopic neovascularization irrigated by the left circumflex coronary, marginal branches and posterior ventricular branch artery (Figure 4). The current chest pain of the patient was attributed to an acute myocardial infarction type 2. 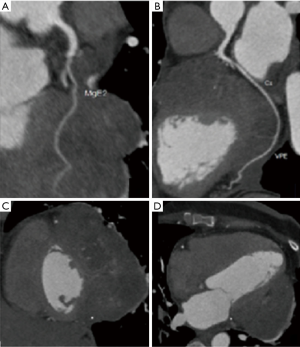 Figure 4 Coronary artery angiotomography showing thymoma and its relationship with the heart. (A,B) CCTA images show the macroscopic neovascularization of the thymoma irrigated by the left circumflex artery and its branches. (C,D) CCTA images demonstrate the invasion of the myocardium by the tumor. CCTA, coronary computed tomography angiography.

The prognosis of thymoma depends on the extent of the disease. In general, this illness has poor response to chemotherapy and radiation therapy. This patient had been treated with radiotherapy and different schedule of chemotherapy in the past, and the best response achieved was tumor stabilization (without reduction or increase in size). In this situation our options have become limited and inevitably the disease tends to continue to grow and invade nearby structures, with a poor prognosis. Considering that the tumor was already in an advanced stage and that the patient had experienced non-negligible side effects without showing a good response with the cancer treatments she performed, the oncology team did not propose new treatments at that time and opted for active surveillance. After an extensive discussion, the cardiology team decided that would be no benefit for treat the lesion of circumflex artery, considering the likely mechanism of the angina. After a few days without additional interventions, she became asymptomatic and received discharge with atorvastatin (40 mg once a day) and acetylsalicylic acid (100 mg once a day), considering that she has a coronary stable plaque. The patient continues to be treated on an outpatient basis by the cardiology and oncology teams. She has not been hospitalized again with the same symptom, but she sometimes complains of atypical chest pain and palpitations. It was decided to keep the use of acetylsalicylic acid and atorvastatin indefinitely, although this is unlikely to have a major impact on her survival.

We described a case of a middle-aged woman with an unresectable thymoma who failed previously in the proposed cancer treatment with chemotherapy and radiotherapy and, given the slow pattern of tumor growth, was under clinical surveillance with few symptoms such as occasional chest pain. After 5 years, she comes to the emergency room with symptoms of acute coronary syndrome. After a CCTA, it was observed that the thymoma involved the heart with signs of myocardial invasion and macroscopic neovascularization irrigated by the left circumflex coronary artery, which could explain the clinical scenario.

Thymomas are the most common thymic tumor in adults, usually with an indolent growth pattern. Their common location is in the anterior mediastinum and these tumors are usually close to important mediastinal structures. Thymomas are seen as a well-circumscribed encapsulated firm mass that can reach large diameters. They are categorized as low-grade epithelial neoplasms in the absence of macroscopic and microscopic invasion but as high-grade malignant neoplasms in the presence of capsular invasion (1).

The prognosis of thymoma and thymic carcinoma involves tumor staging (classified by the Masaoka-Koga staging system) and the resection status. Complete surgical resection is the standard treatment in all phases of thymoma with high cure rates and favorable outcome (5). However, in Masaoka-Koga tumors in stages III and IV, complete surgical resection is not always possible, especially if there is invasion of the heart or large vessels. In these cases, a multimodal treatment of Thymoma consists of chemotherapy, partial surgical resection and radiotherapy, may also be necessary (6). Chemotherapy and in some cases adjuvant radiotherapy are the oncological treatment available to decrease the risk of recurrence and improve survival.

Cardiac metastatic tumors represent a heterogeneous group, potentially involving any of heart structures. Depending on location and morphology, cardiac tumors can produce different types of clinical manifestation, one of them is the mass effect interfering with myocardial function, blood flow, electric impulse formation and conduction and pericardial fluid dynamics. The most common type of cardiac involvement of thymoma are invasion of right atrium and pericardium (3,7,8), and clinical manifestation are coronary compression, pericarditis, pericardial tamponade, hemodynamic obstruction, or superior vena cava syndrome (9).

Coronary arterial disease in these patients were previous reported by coronary compression (9) or invasion of coronary grafts (2,10). In the case presented, it was possible to note that the thymoma invaded all lateral wall of the LV, with no point of cleavage between the structures. This close approximation created a large vascular weave between the tumor and the heart, allowing the circumflex coronary artery and its marginal branches to nourish tumor growth. It was proposed that a mechanism of myocardial infarction in this case could be explain by an imbalance between supply and demand of oxygen due to the compromise of the cardiac blood flow to the myocardium because of a competition with the thymoma.

Also, it is important to remember that in addition to neovascularization of the tumor by the circumflex coronary artery flow, there is moderate stenosis in this vessel that could worsen blood flow to the myocardium in a situation of increased demand. This patient was previously exposed to radiation therapy, and this may be related to atherosclerosis of this patient. A higher heart dose is related to increased risk of cardiovascular disease in long-term survivors (11). An important limitation of this case is that it is an aggressive tumor which did not respond adequately to chemotherapy and radiotherapy. Additionally, the patient did not wish to be exposed to new therapies, which limited the conduct of the case.

In summary, this case highlights a unique and rare case of a thymoma Masaoka IVa that involves the heart with signs of myocardial invasion and presents a macroscopic neovascularization irrigated by the left circumflex coronary and its branches, causing typical angina due to compromised coronary blood flow by the mass causing ischemia.

Conflicts of Interest: All authors have completed the ICMJE uniform disclosure form (available at http://dx.doi.org/10.21037/acr-19-174). The authors have no conflicts of interest to declare.

Ethical Statement: The authors are accountable for all aspects of the work in ensuring that questions related to the accuracy or integrity of any part of the work are appropriately investigated and resolved. All procedures performed in studies involving human participants were in accordance with the ethical standards of the institutional and/or national research committee(s) and with the Helsinki Declaration (as revised in 2013). The authors confirm that written informed consent was obtained from the patient for publication of this article and any accompanying images.