Anterior endoscopic cervical discectomy (AECD) using laser and micro forceps for cervical disc herniation has been considered as an effective treatment in selected cases. However, several spine surgeons recommend the use of allografts, cages, or artificial discs after discectomy due to their concern about postoperative disc space narrowing, spinal instability, and kyphosis caused by the natural disruption of the disc after AECD. This process is based on the theory that disrupted ventral cervical anatomy combined with empty disc space after decompression would naturally collapse in a kyphotic manner over time, leading to a postoperative axial neck pain associated with distorted cervical alignment or delayed radicular pain with the compression of the neural foramen (1). However, the result of this study showed this was not the case. We report two cases of AECD performed 21 and 19 years ago and discuss the progress of the patients. We present the following article in accordance with the CARE reporting checklist (available at http://dx.doi.org/10.21037/acr-20-75).

A 44-year-old female patient visited our hospital following the complaints of posterior neck pain and left lateral forearm pain and numbness for 3 months. She received conservative treatment from other hospitals. The radiological examination revealed a cervical disc rupture, which was displaced on the left side of the C56 level, and it was confirmed as a soft disc (Figure 1A,B). We decided to perform AECD after obtaining her informed consent. 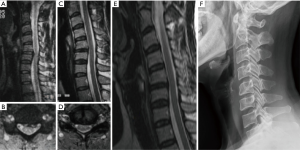 The surgical method followed the general AECD method (2). After inserting the working channel, the disc fragment was successfully removed. Patient was observed for 24 hours in the hospital and then discharged, keeping the cervical collar for 14 days postoperatively.

The patient’s symptoms improved immediately after AECD, and she was discharged from our hospital the next day. Two weeks later, the patient’s symptoms continued to improve, as confirmed by our outpatient clinic. When the patient visited our hospital for a follow-up after 2 years, we rechecked her cervical spine by performing magnetic resonance imaging (MRI). It showed the well-removed herniated cervical disc at the C56 level with a path of a working channel (Figure 1C,D). The patient did not revisit since then, but 21 years after her first surgery, she visited our hospital following the complaint of lower back pain. A lumbar examination was performed, and the cervical area was also examined. Surprisingly, disc height and sagittal balance had insignificant changes (Figure 1E,F).

A 42-year-old male patient visited our hospital following the complaints of posterior neck pain and right upper extremity pain and numbness for 2 months. The main symptom was radicular pain. Radiographically, we confirmed the disc rupture at the right foremen of C67 level (Figure 2A,B,C). We explained the current condition to the patient and decided to perform AECD after obtaining his informed consent.

The operative procedure in this case was similar as that described for the first case.

The patient’s symptom improved immediately after AECD, and no further treatment was required except for temporary medication. He was discharged the same day after the surgery. Because the patient did not revisit our hospital for the same symptom, there were no postoperative images. However, 19 years later, the patient was requested to revisit our hospital. We checked his cervical spine by performing X-ray and MRI, which showed insignificant changes in disc height and sagittal balance (Figure 2D,E). Furthermore, the patient showed no similar symptoms since his first surgery.

All procedures performed in studies involving human participants were in accordance with the ethical standards of the institutional and/or national research committee(s) and with the Helsinki Declaration (as revised in 2013). Written informed consent was obtained from the patient for publication of this study and any accompanying images.

AECD is a minimally invasive procedure. It preserves the majority of the anterior and central disc and anterior longitudinal ligament (ALL), with both upper and lower vertebral end plates intact. Other benefits of AECD include lower intraoperative blood loss, lower postoperative pain, and shorter total length of hospital stay (2). On the contrary, the following are the main disadvantages of AECD: difficulty in obtaining the precise placement of instruments in the lesion, surgical manipulation through a single working channel, and the possibility of conversion into open surgery (3).

After considering the above advantages and disadvantages and the literature (2), AECD is indicated in the following: (I) neck pain and/or cervical radiculopathy with neurological disturbances, (II) soft disc herniation demonstrated on computed tomography scan and/or MRI, (III) unsuccessful conservative therapy for at least 6 weeks, and (IV) no past history of cervical surgery. Both of the patients described above were eligible for AECD, AECD was performed, and the results were good.

Prior to the development of the recent endoscopic techniques, a working channel was entered by removing the disc after cutting the ALL and annulus. Hence, several spine surgeons are concerned about postoperative disc degeneration and disc space collapse. The anterior cervical approach involves a partial invasion of the intervertebral disc, and a reduction in the intervertebral disc height after AECD has been reported (2,4,5). Intervertebral disc height is an index of intervertebral disc degeneration, although it is not always associated with clinical symptoms. The association between the amount of disc removal and the degree of disc height reduction is also unclear at this point (2). However, with the development of endoscopic technique, it is possible to simply remove the ruptured particles only by a small “splitting” rather than destroying the structures. Due to the needle and the obturator splits into the posterior margin of the disc, it is possible to minimize the damage to the disc, and this may have contributed to the preservation of the disc height. As a result of performing AECD this way, the intervertebral disc height and the sagittal balance could be maintained as in these two cases.

The fatal limitation of these cases is dependent on the quality of past images. Approximately 20 years ago, when the use of digital images was not common, at that time, doctors developed photographs on film and diagnosed patients. As the film images were scanned and attached, it was not possible to measure the correct disc height and changes pre- and postoperation. Moreover, because the dynamic X-ray was not performed at the time of operation, the change of range of motion could not be measured and compared accurately.

Nevertheless, our study showed that patients who underwent AECD did not show a reduction of intervertebral disc height over the long-term. Moreover, they did not have any axial neck pain or recurred radiating pain. To the best of our knowledge, this is the first report of patients who had undergone AECD with no sagittal alignment change or reduction of disc height at least after 19 years of follow-up.

Good long-term clinical results were observed in the two AECD cases described here. No significant difference in disc height was observed pre- and postoperation. Therefore, AECD can provide good results, even in long-term follow-up, without acceleration of disc degeneration in patients with soft cervical disc herniation. However, it is difficult to generalize these two cases; hence, more studies are required to establish this finding.

Reporting Checklist: The authors present the study in accordance with the CARE reporting checklist. Available at http://dx.doi.org/10.21037/acr-20-75

Conflicts of Interest: All authors have completed the ICMJE uniform disclosure form (available at: http://dx.doi.org/10.21037/acr-20-75). The authors have no conflicts of interest to declare.

Ethical Statement: The authors are accountable for all aspects of the work in ensuring that questions related to the accuracy or integrity of any part of the work are appropriately investigated and resolved. All procedures performed in studies involving human participants were in accordance with the ethical standards of the institutional and/or national research committee(s) and with the Helsinki Declaration (as revised in 2013). Written informed consent was obtained from the patient for publication of this Case report and any accompanying images.