Use of electrochemotherapy in a voluminous chest wall recurrence of triple-negative breast cancer: case report

Breast cancer is the primary cause of chest wall recurrence, skin and subcutaneous tissue metastases (1) which mainly occur as multiple nodes. Frequently, necrotic evolution and ulcerations lead pain, asthenia and frequent dressings which may cause both physical and psychological discomfort. The gold standard in case of isolated cutaneous or subcutaneous metastasis is surgical excision, occasionally associated with radiotherapy, chemotherapy or both of them. If these treatments may not be used, electrochemotherapy (ECT) could be a good alternative to treat pain and symptomatic manifestations of the disease. ECT is a procedure for a local tumor ablation through the application of electroporation caused by electric current pulses and the supply of cytostatic agent (2).

We present a case of a 62-year-old woman suffering from chest wall recurrence of triple negative breast cancer, after following chemotherapy, surgery and radiotherapy and application of electro chemotherapy session with satisfactory results. The aim of this work was to discuss our experience using electro chemotherapy to treat recurrent cutaneous of breast cancer. In our knowledge this is the first Case Report on a triple negative wide cutaneous metastasis of a breast cancer treated with this technique. We present the following case series in accordance with the CARE reporting checklist (available at http://dx.doi.org/10.21037/acr-20-54).

The clinical case we present concerns a 62-year-old patient suffering from relapse of Triple Negative mammary neoplasm. The genetic analysis of the BRCA2 gene was positive by mutation. In September 2016 she had the appearance of a tumor mass of the right breast with a rapid development of 27 mm on the right and two other formations on the left of 17 and 12 mm. Histological examination showed infiltrating ductal carcinoma (grading 3, estrogen receptor 0%, progesterone receptor 0%, Mib1 (Ki67) 80%, growth factor of human epidermis (HER2) score 0. On the left side the lesions were benign.

A staging PET negative for metastases or secondary tumor localization was performed. Subsequently the patient underwent six cycles of chemotherapy with Taxol. Last Taxol administration was at the beginning of January 2017, after 7 weeks of chemotherapy, with clinical progression of the breast node.

In March 2017 the patient performed the biopsy of lymph node at the left axillary. The histological diagnosis was poorly differentiated carcinoma, like lymph node metastasis from the already diagnosed breast cancer.

Two months later PET demonstrated two adenopathy of the internal mammary chain (SUVmax 7.6) and ipercaptation on the sternum and adenopathy at the left armpit level (SUVmax 13.7). In April patient began therapy with Gemcitabine and Epirubicin. The PET control followed at the end of the course of chemotherapy was found total metabolic normalization of previous finds. In October 2017 a control PET was repeated that showed extensive and focal capture in right parasternal area (SUVmax 20.1), appreciable palpably, compatible with neoplastic recurrence with high glucidic expression. She started chemotherapy according to the Carboplatin-Gemcitabine scheme, Doxorubicin 75% of the maximum dose and subsequently radiotherapy cycle with 50 Gy in 25 fractions.

Clinically the patient presented two nodules in the right parasternal area which were studied with Thorax-CT to establish surgical metastases removal. Thorax-CT showed subcutaneous node of 40 mm extension, without sternal erosion or infiltration. For this reason the lesion was surgically removed and a left thigh skin graft was applied after one month. The histological examination showed a dermohypodermic recurrence of the previously diagnosed breast cancer (infiltrating carcinoma, non-specific type, NST/WHO 2012), with the same receptor characteristic of the primary breast lesion. The definitive histological examination showed negative resection margin for tumor infiltration (minimum distance from the bottom margin 0.6 mm).

The patient was frequently visited and medicated at our breast surgery. The persistence of the tumor disease with abundant losses of blood serum material led the patient to a progressive decay of the general physical conditions, as well as a difficult management of the local pain despite the pharmacological treat opiates. In order to obtain greater pain control and better management of the injured state, an electrochemotherapy session was proposed (Figure 1). 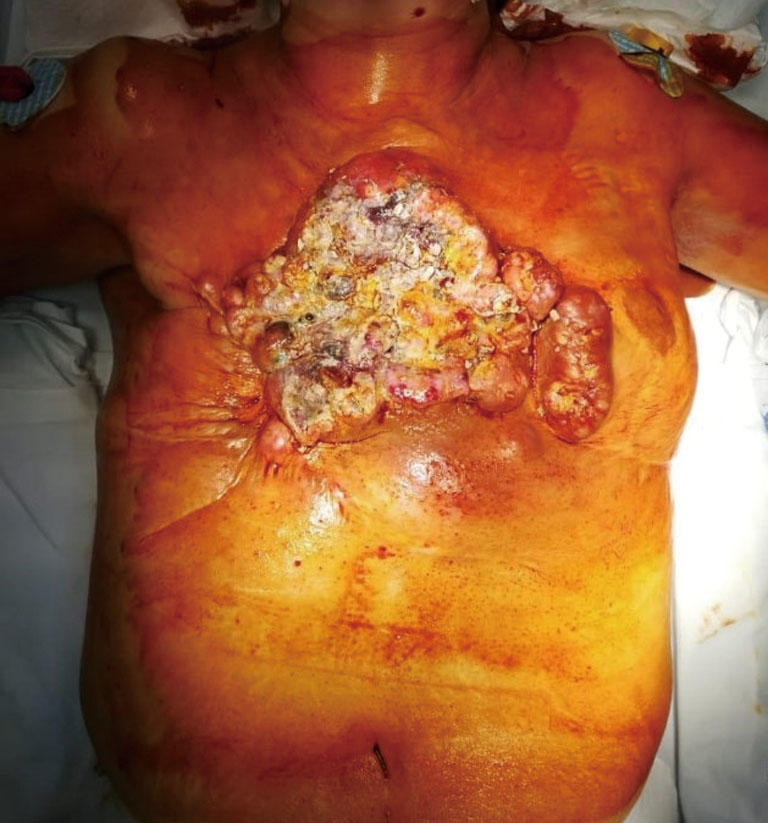 On May 17th 2019 the patient was admitted to our Department of Radio-guided and Breast Surgery and subjected to a course of electrochemotherapy by administration of intravenous Bleomycin 30 UI, without any immediate or post-operative complications. The interval between bleomycin infusion and electroporation was 8 minutes. The patient had no adverse reaction. She went 6 days hospitalization after the treatment.

Written informed consent was obtained from the patient for publication of this manuscript and any accompanying images.

The main purpose of the screening in detection of early stage breast cancer is to avoid the risk of metastasis and treat completely the disease. To date, breast cancer metastasis represent the main cause of deaths for breast cancer because indicate a systemic progression.

Moreover, breast cancer is the most common cause of skin metastases in women: up to 30% of patients develop local skin recurrence in the following 10 years after mastectomy (1,2).

Despite skin metastases can be suspected by a clinician through physical examination, their clinical presentation may be a challenge as the lesions are frequently asymptomatic or may present in variable forms (papules, nodules, plaques, or inflammatory and bullous lesions) and only a skin biopsy could lead to recognize the tumor (3,4) and provide information on the primary origin of the tumor.

Skin metastasis can be isolated or may be associated with a dissemination to other organs. Chest wall recurrence usually consists in multiple nodules of the skin and subcutaneous tissue, which can be ulcerated, can bleed or cause chronic pain, with worsening life quality. This is not always associated with poor prognosis, because resection may be possible, occasionally associated with radiotherapy and systemic treatment (3). If surgery and radiotherapy are no longer possible, one of the possibilities to achieve local control is electrochemotherapy (ECT).

Electrochemotherapy consists in an association of electroporation and low-dose chemotherapy. The use of an electric field lead to a change of the electric potential of the cell membrane and a variations of the structure of the cell membrane. This generates micro-pores in the membrane, allowing simple diffusion of molecules which would otherwise be unable to penetrate it, so they can reach the cytosol at much higher concentrations. After a while, the cell membrane regains homeostasis, and high concentrations of the cytostatic agent remain in the cytosol: as a result the potential local toxicity increases significantly.

We performed electrochemotherapy using an electrical impulse generator, the Cliniporator (IGEA.r.l., Carpi, Italy): one application consists of 1–20 consecutive pulses of electric current with a voltage of 100–1,000 V, a duration of 100 µs and a frequency between 1–5,000 Hz. There are several kinds of electrodes that can be used depending on different lesions and locations.

To date, the principal cytotoxic agents used are Bleomycin and Cisplatin. If used conventionally, they present a low penetration into the cell but the effect of electroporation increase their concentration and toxicity between 1.1 and 80 times for Cisplatin and several thousand times in the case of Bleomycin.

Bleomycin belongs to the group of glycopeptides with minimal myelotoxic effect (5). Interstitial plasmacytic pneumonia and interstitial lung fibrosis are the main side effects, but they appear predominantly in case of advanced age, pulmonary disease, smoking, renal disease and previous radiotherapy of the lung. It has been showed that a Bleomycin dose of 400 UI/m2 should not be exceeded (4). An overdose can cause respiratory failure, fever, hypotension, tachycardia, and shock. There is not specific antidote and Bleomycin cannot be excreted by dialysis. Bleomycin acts leading to DNA strand breaks and inhibits the DNA-dependent polymerase, inducing DNA fragmentation and cell death. With Bleomycin, both intratumoral and intravenous administration are possible: intratumoral administration is legitimate if less than 7 nodule of small diameter (<20 mm) are present, at doses depending on tumor volume; otherwise, if several, larger metastases (>20 mm in diameter) are present, intravenous administration is recommended, at a dose of 15 mg/m2 or 18–27 UI/m2, not exceeding the cumulative dose of 400 UI/m2. Cisplatin, like Bleomycin, works at DNA level, but leading to the cross-linking of DNA, altering his structure and leading to cell apoptosis. 90% of Cisplatin is excreted through kidneys, hence prior is renal function evaluation ad attention should be paid to adequate hydratation, in order to prevent nephrotoxicity (6). Under ECT, cisplatin is administered intratumorally and not intravenously. It should better be administered in case of small number (<7) of small metastases (<20 mm).

Electrochemotherapy is suitable for patients with cutaneous or subcutaneous metastases who have already exhausted the possibilities of surgery and radiation therapy, and who are no longer string candidates for surgery or chemotherapy treatment. The application is palliative. The ESOPE project (European Standard Operating Procedures for Electrochemotherapy) is an international, multi-centre prospective study started in 2002, with the aim to evaluate the safety and the efficacy of this therapy in case of cutaneous and subcutaneous metastases. Based on his data, electrochemotherapy was effective in both melanomas and non-melanomas, with a complete remission rate of 11% according to the WHO criteria. The majority of these patients have already exhausted other standard treatments or present severe comorbidity which contraindicate surgery. Some authors indicate the electrochemotherapy in control of pain and in treatment of bleeding and weeping metastases, even large lesions as in our case. It is associated with short hospital-stay and most patients do not require analgesics. Local tumor control is possible and repeatability is available, improving quality of life. Eventually the favorable cost-benefit ratio makes it attractive.

Lesion size at treatment influences response to electrochemotherapy. Smaller lesions were more likely to have an objective response to treatment. Lesions are typically painful and are prone to bleeding and infection with an impact on patient quality of life and psychological wellbeing. The treatment of recurrent cutaneous breast cancer gets better local disease control.

Main disadvantages are anaesthesia-related risks, because it is performed under general anesthesia. The use of Bleomycin can lead to pulmonary fibrosis; moreover, the electrode used can lead to large ulcers formation.

Finally, as the use of electro chemotherapy is not curative but palliative, it is very likely that the treatment can be repeated.

An increasing body of experience suggests that electrochemotherapy (ECT) provides effective tumor control. This procedure was standardized in 2006, and to date, some study have confirmed the antitumor activity of ECT (5) in cutaneous/subcutaneous metastasis from cancer of any histological type. ECT appeared to preserve and positively influence health-related quality of life outcomes.

It would be desirable to start the terminal patients with metastatic disease not resectable to this type of treatment within the framework of scientific protocol. This process can take place in high-volume centres to achieve inadequate sample number.

Electrochemotherapy appears as a promising drug delivery method for the treatment of cutaneous or subcutaneous malignant tumors in the setting of recurrent, pain control or inoperable disease refractory to the conventional anticancer therapies.

New studies and more case studies will be needed to confirm these preliminary data. The repeatability of the procedure that can be performed on the same patient proves useful in cases of difficult pain control and in improving the quality of life.

Reporting Checklist: The authors have completed the CARE reporting checklist. Available at http://dx.doi.org/10.21037/acr-20-54

Conflicts of Interest: All authors have completed the ICMJE uniform disclosure form (available at http://dx.doi.org/10.21037/acr-20-54). The authors have no conflicts of interest to declare.

Ethical Statement: The authors are accountable for all aspects of the work in ensuring that questions related to the accuracy or integrity of any part of the work are appropriately investigated and resolved. All procedures performed in studies involving human participants were in accordance with the ethical standards of the institutional and/or national research committee(s) and with the Helsinki Declaration (as revised in 2013). Written informed consent was obtained from the patient for publication of this manuscript and any accompanying images.