Coronary artery disease and stroke are the leading causes of mortality and morbidity worldwide (1). Their incidence and prevalence are steadily rising in China (2). Coronary artery disease refers to narrowing of the coronary arteries secondary to a buildup in the walls of the arteries of plaque, and broken plaque may lead to myocardial infarction (3). Stroke is a neurological deficit attributed to acute focal injury of the central nervous system by a vascular cause, which is divided into ischemic and hemorrhagic stroke (4,5). Common risk factors of coronary artery disease and stroke include smoking, alcohol abuse, hypertension, diabetes mellitus, hyperlipidemia, and psychosocial stress (6,7).

On June 29, 2016, his condition was stable without melena. An upper gastrointestinal endoscopy was performed after a written informed consent from the patient and his relatives was obtained. Upper gastrointestinal endoscopy demonstrated reflux esophagitis and multiple ulcers at the antrum (Figure 2). However, on the evening of June 29, 2016, his condition was suddenly exacerbated presenting with continuous pain under the xiphoid. The 18-lead electrocardiogram demonstrated ST-segment depression in leads V3-V6 and flat T-wave in leads I, II, III, aVL, aVF, V5, and V6 (Figure 3). Laboratory tests demonstrated that WBC was 16.4×109/L, GR% was 86.8%, HB was 58 g/L, PLT was 84×109/L, BG was 5.65 mmol/L, C-reactive protein (CRP) was 113.2 mg/L (reference range, ≤10 mg/L), CK was 1,613 U/L, CK-MB was 32 U/L, hCRP was 85.7mg/L, and hs-TNT was 0.036 ng/mL. Taken the typical signs of myocardial infarction including continuous pain under the xiphoid and an increased hs-TNT into consideration, cardiologist considered that non-ST elevation myocardial infarction wasn’t excluded. Antithrombotic and interventional therapy weren’t recommended under his current condition. Intravenous infusion of isosorbide mononitrate was prescribed. Additionally, 2 units of red blood cell was transfused. 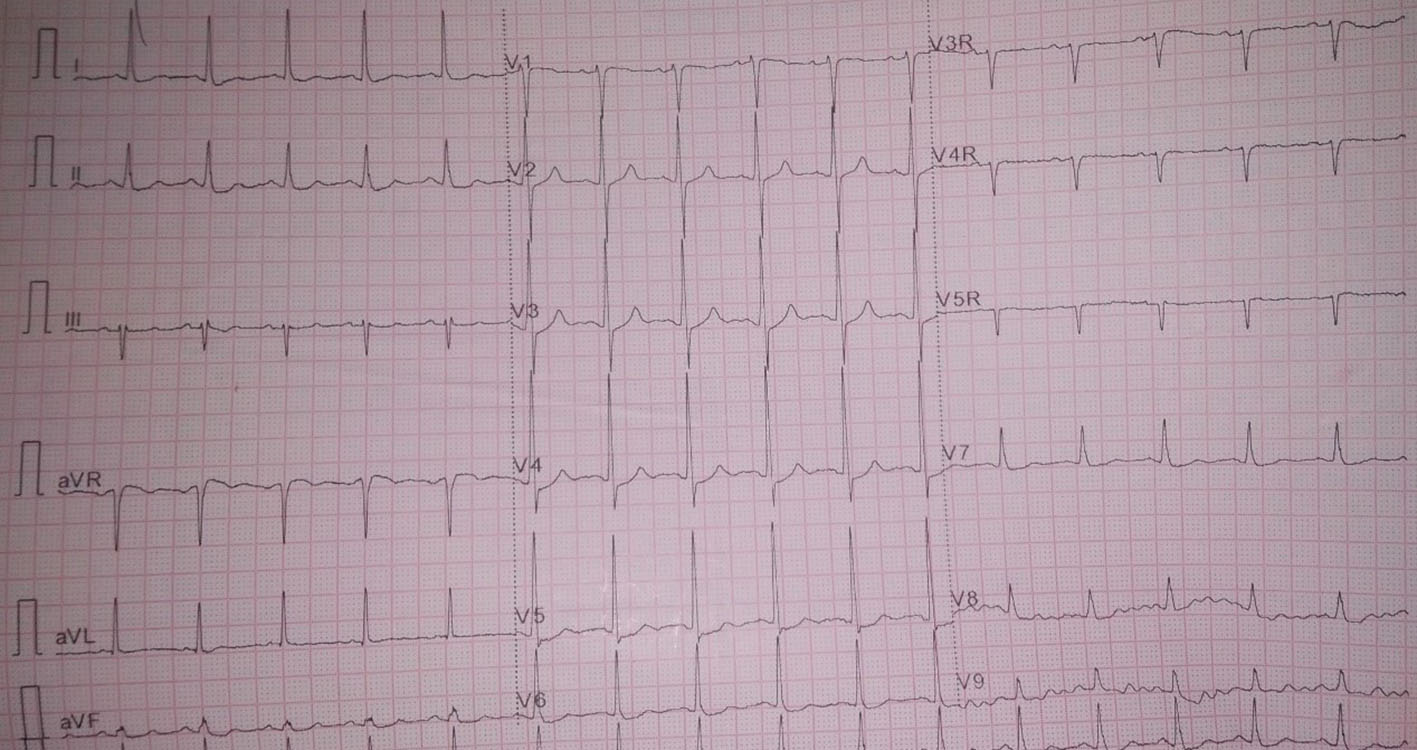 On June 30, 2016, his pain under the xiphoid slightly improved with limb weakness. Laboratory tests demonstrated that WBC was 15.0×109/L, GR% was 82.3%, HB was 66g/L, PLT was 78×109/L, BG was 5.14 mmol/L, CRP was 42.6 mg/L, CK was undetectable, CK-MB was 42U/L, hCRP was 87.9 mg/L, hs-TNT was 0.036 ng/mL, and N-type B-terminal natriuretic peptide (NT-proBNP) was 3,930 pg/mL (reference range, 0–125 pg/mL). Magnetic resonance of brain demonstrated multiple cerebral infarction and brain stem infarction. Taken the signs of cerebral infarction including limb weakness and decreased computing capability into consideration, the patient was diagnosed with ischemic stroke. Torasemide was intravenously injected, and 2 units of red blood cell was transfused.

On the morning of July 5, 2016, his condition was suddenly exacerbated again presenting with hematemesis and melena. Immediate laboratory tests demonstrated that WBC was 13.3×109/L, GR% was 62.5%, HB was 79 g/L, PLT was 113×109/L, BG was 11.57 mmol/L, BUN was 12.95 mmol/L, and Cr was 166.40 µmol/L. Intravenous infusion of esomeprazole, somatostatin, and hydroxyethyl starch were given. Thrombin and Yunnan Baiyao were orally taken, and 2 units of red blood cell was transfused.

On the afternoon of July 5, 2016, his condition was stable without gastrointestinal bleeding. But the patient and his relatives decided to discharge because of unaffordable medical expenses. Unfortunately, he died on July 12, 2016.

Acute upper gastrointestinal bleeding is a serious complication with a mortality of 3–14% (13). It is more severe in cirrhotic patients than in patients without liver cirrhosis (14). However, this patient did not perform liver biopsy. Only a suspected diagnosis of liver cirrhosis was made. Then, this patient did not have clear sign of portal hypertension, such as splenomegaly and varices. Herein, the potential reason of gastrointestinal bleeding may be gastric ulcer. On the other hand, laboratory tests demonstrated that the levels of BUN and Cr were significantly increased. However, the patient didn’t meet the criteria of hepatorenal syndrome (15). And his renal function was improved after treatment. Herein, the patient should be diagnosed with pre-renal renal hypoperfusion secondary to gastrointestinal bleeding (16). In this case, the possible causes for developing myocardial infarction and ischemic stroke after acute upper gastrointestinal bleeding are as follows. First, hypoperfusion secondary to massive acute gastrointestinal bleeding led to the ischemia of various organs, including heart and brain (11,17). Second, this patient had a long-term history of smoking and alcohol abuse. Smoking is a risk factor of cardiovascular disease, which causes endothelial dysfunction and atherogenesis (18,19). Although 1–2 drinks per day are a negative risk factor of myocardial infarction and ischemic stroke, harmful drinking (consuming ethanol ≥61.0 g per day for men) significantly increases the risk of death from cardiovascular disease (20-22). Third, this patient had an advanced age, which is a major risk factor of cardiovascular disease (23). He was more vulnerable to suffer from severe acute upper gastrointestinal bleeding episode than young adult. Fourth, cardiac embolism was also a risk factor of ischemic stroke (24). This patient was diagnosed as ischemic stroke after a diagnosis of myocardial infraction, therefore myocardial infraction might be a potential cause for ischemic stroke. After that, his magnetic resonance of brain demonstrated multiple cerebral infarction and brain stem infarction.

The authors would like to thank the patient for participating.

Conflicts of Interest: All authors have completed the ICMJE uniform disclosure form (available at http://dx.doi.org/10.21037/acr-19-198). The authors have no conflicts of interest to declare.

Ethical Statement: The authors are accountable for all aspects of the work in ensuring that questions related to the accuracy or integrity of any part of the work are appropriately investigated and resolved. The patient in our manuscript died after discharge. The study was conducted in accordance with the Declaration of Helsinki(as revised in 2013). We tried our best to contact with the next of kin of the patient by telephone, but we failed. We just reviewed the case to share a rare clinical experience in this case report.