In some circumstance, the diagnosis of pulmonary embolism remains a challenge with atypical characterization presented in this case. Herein, we report a case of a severe pulmonary embolism that revealed by consciousness disorders. This report highlights the extracorporeal membrane oxygenation (ECMO) could be the only life-sustaining and the possibility of the solution treatment of acute pulmonary embolism. We present the following article in accordance with the CARE reporting checklist (available at http://dx.doi.org/10.21037/acr-20-66).

A 33-year-old woman presented with acute breathing difficulties, purple lips and sweating. She had no cough, hemoptysis and chest pain. The patient was unconscious when the ambulance arrived.

The physical examination revealed that she had a blood pressure 80/50 mmHg, blood oxygen saturation 88% on air. Therefore, the patient was immediately treated with the oxygen-absorbing dopamine boost, oxygen absorption and rehydration.

Plasma dimerization plasmin fragment D (D-dimer) assay was 7.84 µg/mL (the normal value was <2.09 µg/mL). The arterial blood gas measurement showed that carbon dioxide pressure was 24 mmHg. The troponin concentration was normal. The electrocardiogram indicated the sinus tachycardia and the frequent ventricular premature beat (Figure 1). The patient suddenly appeared full body convulsions, decreasing heart rate and then cardiac arrest. The patient was treated immediately with chest compression, ventilator noninvasive ventilation. After the treatment, the blood oxygen saturation was recovered to 94% and the heart rate was recovered to 94 times/minute. The results of the echocardiogram showed the increasing of the right ventricular and the pulmonary artery pressure (Figure 2). However, a few minutes later the patient appeared in a heart rate drop, unconscious and cardiac arrest again. She was treated with the chest compression and the resuscitation immediately. The patient waked up in 15 minutes and then was transferred to intensive care unit (ICU) for further treatment. 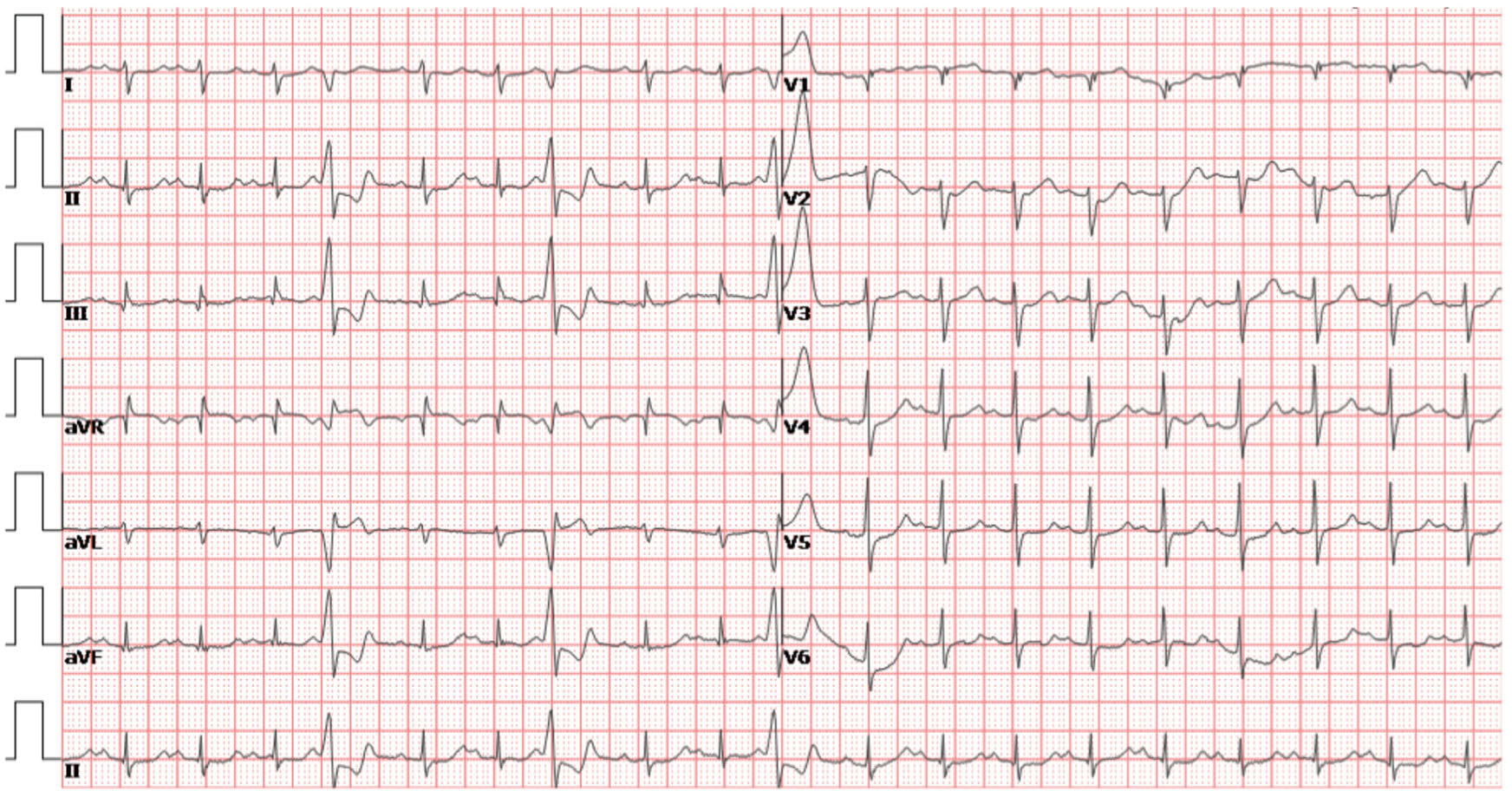 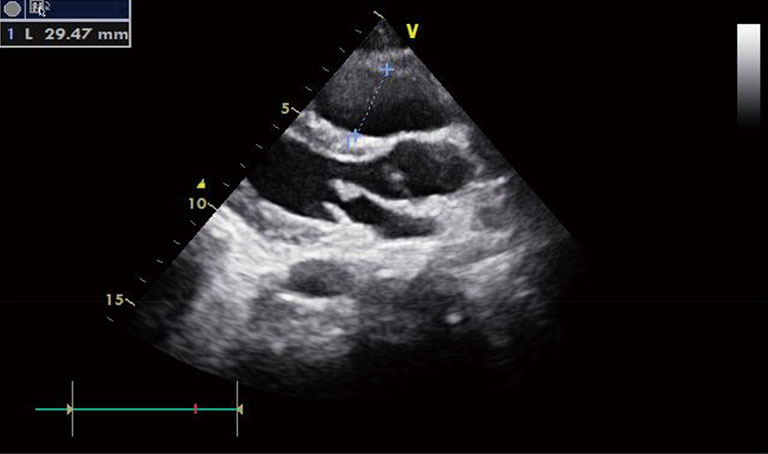 After entering ICU, the patient was treated with trachea intubation and ventilator-assisted respiratory therapy. The patient still appeared cardiac arrest for a few times. And she was treated with cardiopulmonary resuscitation (CPR) immediately. Given that the patient’s lung function may be completely lost, ECMO replacement and venous thrombosis treatment were given to the patient to restore her lung function. After her condition became stable, the pulmonary artery enhancement imaging was carried out. The examination results showed that both sides of her pulmonary arteries were completely closed (Figure 3). Therefore, the patient was sent to the operating room for arteries thrombotic treatment. After 36 hours, the patient’s condition was improved, and the lung function was recovered (Figure 4). Finally, ECMO was deactivated. She was then transferred from ICU to the vascular surgery specialist and receive a low molecular heparin anticoagulant treatment. The patient was discharged from the hospital after half a month. 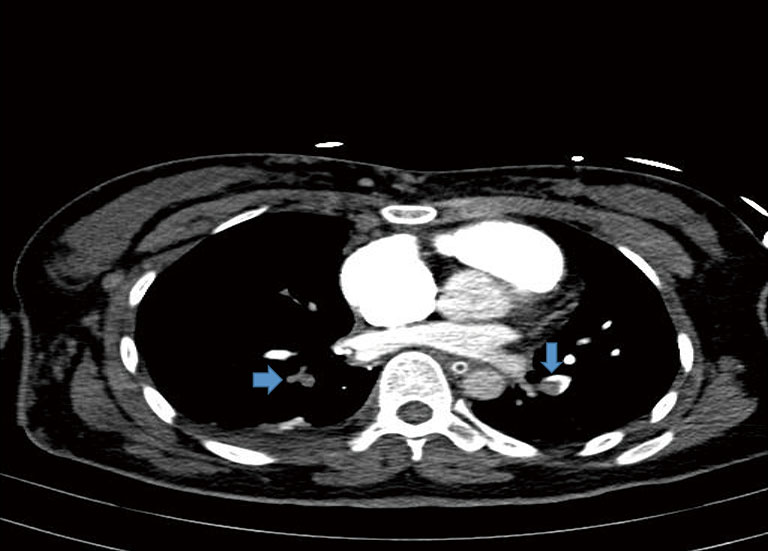 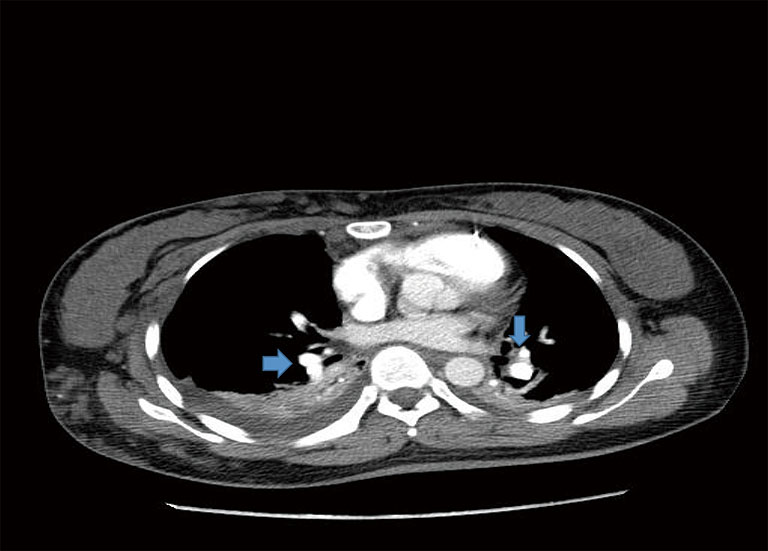 Written informed consent was obtained from the patient for publication of this study and any accompanying images.

Cases of the pulmonary embolism, which are caused by breathing difficulties and coma, are rarely reported. It is generally believed that the symptoms of the pulmonary embolism are cough, chest pain, hemorrhage and fainting (1). Conventional treatment and ventilator-assisted respiratory therapy are the solutions (2). However, our patient did not show these typical symptoms. Instead, the patient quickly appeared unconscious and cardiac arrest repeatedly. Therefore, the diagnosis and treatment are very difficult. In the emergency room, completing the second polymer test, electrocardiogram, troponin and bedside heart color super are very important for differential diagnosis. Patients should be treated with venous thrombosis immediately after successful resuscitation to rule out the disease of cardiac and cerebral hemorrhagic contraindications (3). Especially for the patients with double-sided pulmonary embolism, whose lung function is completely lost, ECMO could be the only life-sustaining and the possibility of the solution treatment (4). Timely completion of pulmonary arterial computed tomography angiography (CTA) is the gold standard for the clear diagnosis of pulmonary embolism.

Funding: This work was supported by grants from the Natural science foundation of Fujian province (No. 2019J01559) and the National Natural Science Foundation of China (No. 81671583).

Reporting Checklist: The authors have completed the CARE reporting checklist. Available at http://dx.doi.org/10.21037/acr-20-66

Conflicts of Interest: All authors have completed the ICMJE uniform disclosure form (available at http://dx.doi.org/10.21037/acr-20-66). The authors have no conflicts of interest to declare.

Ethical Statement: The authors are accountable for all aspects of the work in ensuring that questions related to the accuracy or integrity of any part of the work are appropriately investigated and resolved. All procedures performed in studies involving human participants were in accordance with the ethical standards of the institutional and/or national research committee(s) and with the Helsinki Declaration (as revised in 2013). Written informed consent was obtained from the patient for publication of this study and any accompanying images.