Dermatomyositis (DM) is a rare connective tissue disorder that results from autoimmune antibodies by humoral immune system activation. The reported incidence of amyopathic DM (46.4%; 21%) is less as compared to classic DM and has a female preponderance (1,2). Prior to the introduction of corticosteroids in the treatment of DM, the prognosis was extremely poor, with a mortality rate as high as 50 to 61% (3,4). Muscle or skin biopsy is required to support the diagnosis; however, it is not necessary if there is a typical clinical presentation suggestive of DM. Cytokine storm known as Macrophage activation syndrome (MAS) is a fatal and uncommon complication of DM.

This case highlights MAS, which depicts a miscellaneous clinical scenario with multiple differential diagnoses which are the real challenge and can be extremely tricky to manage if the pathogenesis is not fully understood.

We report a fatal case of DM with rapidly progressive interstitial lung disease (ILD) which failed to respond to systemic steroids and consequently resulted in MAS leading to multi-organ failure and thromboembolism (right ventricular thrombus) (RVT). To the best of our knowledge, a case of DM with RVT has never been reported so far. We present the following case in accordance with the CARE guideline.

A fifty-three years old Hispanic female with a history of polyarthritis for past 3 months (with no definite diagnosis) presented in the emergency department (ED) with intermittent fever, dyspnea sore throat and dry cough for ten days. She denied chest pain, hemoptysis, rhinorrhea, nasal stuffiness, or postnasal discharge. There were no sick contacts and no history of recent travel. The patient had been experiencing arthralgias involving shoulder, elbow, wrist, interphalangeal, knee and ankle joints, burning sharp pain aggravated on movement with no relieving factor. There was erythematous rash located in periorbital areas bilateral, lateral aspect of right leg and thigh, around the neck, bilateral shoulders, left elbow, and bilateral knuckles (Figure 1). The patient had an unintentional weight loss of ten pounds for the last four months with reduced appetite.

The patient was a lifetime non-smoker, non-alcoholic, never used illicit drugs, and no history of sexually transmitted diseases. No history of similar complaints and no similar history in any family member. Initial vitals in ED were, blood pressure (BP) 108/59 mmHg, heart rate 88 beats per minute, temperature 104-degree Fahrenheit, respiratory rate 30 per minute, oxygen saturation 98% with the nasal cannula at 4 liters per minute. Physical Exam was positive for mild respiratory distress, heliotrope rash, Gottron’s patches, and Shawl sign, coarse crackles on lung auscultation, equal air entry bilateral. Joints were not deformed. No organomegaly on the abdominal exam. No genitourinary rash or discharge noted. Blood work showed normocytic anemia with anisocytosis, hypocalcemia, hypophosphatemia, hypoalbuminemia, and raised aspartate aminotransferase. A chest radiogram showed increased interstitial markings on the left lower lung field. The initial diagnosis was community-acquired interstitial pneumonia. Antibiotics for atypical coverage were started. The patient deteriorated despite changing antibiotics; in the meantime, blood cultures and sputum culture were negative. Throat swab was negative for Streptococcus pneumonia. Arterial blood gas showed fully compensated respiratory alkalosis while on 100% oxygen on a non-rebreather mask. A computed tomography (CT) scan of the chest showed the ground-glass appearance of the interstitium (Figure 2). CT angiography ruled out pulmonary embolism. A high dose of systemic steroid was started (80 mg/day). Subsequently, the patient became hypoxemic and hypotensive and had to be placed on mechanical ventilation. Ferritin 1,600 ng/mL, lactate dehydrogenase (LDH) was 490 Units/Liter, erythrocyte sedimentation rate (ESR) was 60 mm/hour, C-reactive protein (CRP) was 176 mg/L. Thereafter acute renal failure set in along with bicytopenia (anemia and thrombocytopenia). Continuous veno-venous hemofiltration was initiated. A transesophageal echocardiogram revealed a thrombus in the right ventricle (Figure 3). There was no evidence of deep vein thrombosis on the Doppler ultrasound of extremities. 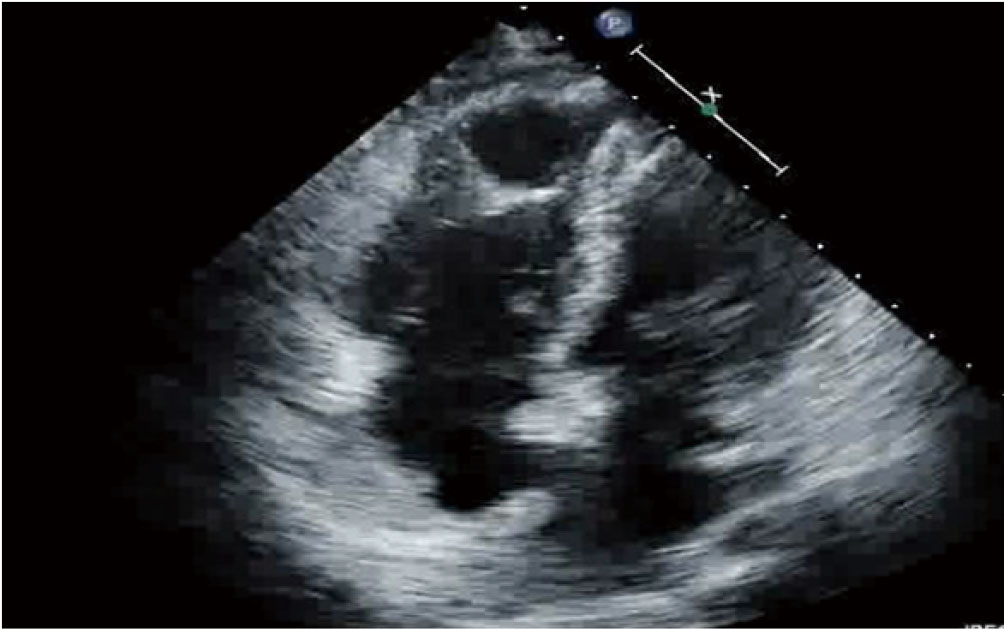 DM population is prone to development ILD, more so in the presence of factors like older age at diagnosis, arthritis or arthralgias, fever, presence of anti-Jo-1 antibodies, elevated ESR, presence of anti-MDA5 antibodies, and elevated CRP level. In a genetic study on the Chinese Han population involving 1017 patients with DM/PM, it was observed that there is a positive association between ANKRD5 gene polymorphism and DM-ILD (5,6).

Thrombosis in autoimmune disease is multifactorial. The overall incidence of pulmonary embolism in DM is three times more as compared to the general population; risk increases to sixteen folds for a one year follow up (7-10). Humoral immune response flare mediates Microangiopathic vascular damage that sets in a cascade of thrombogenesis. Risk is augmented with comorbid conditions and other systemic diseases (11,12). There is evidence suggesting a strong association between thromboembolism that includes deep vein thrombosis and pulmonary embolism, in DM (13). A most common presentation is deep vein thrombosis or pulmonary embolism; however, our patient developed a right ventricular thrombus (7,14-17).

Thrombosis can be best explained by systemic inflammation by an autoimmune attack. There is induction of tissue factor expression and inhibition of fibrinolysis by upregulation of plasminogen activator inhibitor levels (18). There is multi-system involvement like a cardiovascular, pulmonary, hematological, and central nervous system. Severity and progression of ILD depend on patient factors like age, skin rash, presence of anti Jo antibodies.

Multi-system failure has been attributed to MAS, which is phagocytosis of hematopoietic elements by activated macrophages. Mostly seen in association with rheumatoid arthritis and lupus; however, it has been reported in several cases of juvenile DM. MAS leads to a multi-system failure that includes cytopenias, thrombosis, renal failure, heart failure. Major Cytokines involved are Interleukin 6, 8, 18, tumor necrosis factor-alpha, and interferon-gamma. MAS can result from triggers like infections (viral/bacterial/parasitic), malignancy (like lymphocytic leukemia and Hodgkin’s lymphoma), autoimmunity and environmental factors, and lung transplantation. In such cases, it is better known as a reactive or secondary hemophagocytic syndrome (HPS). HPS leads to a significant spill of cytokines from activated macrophages which attacks and destroys host tissue.

In our case, the most likely underlying cause of right ventricular thrombus was primary MAS. Although the patient had positive Streptococcal pneumoniae IGG antibodies (IgM antibodies were negative) and hepatitis B core antibodies positive, both reflect past infection.

The patient was on systemic steroids since the diagnosis (one month) of DM. There was minimal relief in arthralgias. Thereafter patient presented with non-specific symptoms of suggestive of pneumonia. It is crucial to have a complete understanding of inflammatory myopathies as their presentation can mimic sepsis. Fever, cough, dyspnea, and lung involvement in radiogram can easily be confused with bacterial or viral pneumonia.

The diagnosis is based on a collaboration between clinical and laboratory parameters. There are no established diagnostic criteria for MAS/HPS, however, researchers have designed criteria that have been validated. There are several criteria reported for MAS is in association with juvenile idiopathic arthritis (JIA), lupus, and adult onset Still’s disease and systemic sclerosis. PRINTO criteria are one such criteria (designed for JIA) Sensitivity of 72 percent and specificity of 97 percent; it was designed after a multi-process approach involving a questionnaire answered by expert consultants in rheumatology (20).

There is no criterion specific for MAS diagnosis in DM; however, the basic mechanism of MAS is similar in all connective tissue and autoimmune disorders; therefore, the diagnosis can be established keeping in consideration multi-system involvement. Laboratory findings include cytopenias, coagulopathy, hypofibrinogenemia, hyperferritinemia, hypertriglyceridemia, hypoalbuminemia, and abnormal liver enzymes. High ferritin relates to resistance to response to therapy and worse outcome compared to low or normal ferritin levels. In the presence of high ferritin, low glycosylated ferritin is a known prognostic factor. Bone marrow may show active phagocytosis of hematopoietic elements by phagocytes; however, negative bone biopsy does not preclude the diagnosis of MAS. Biopsy from other organs like lymph nodes, liver, and spleen may show similar histopathological features. Testing for specific genetic expression is a useful diagnostic tool; however, not utilized commonly as it is not readily available in all centers.

In our case, MAS rapidly spread to involve almost every organ system and was resistant to therapy. Such patients must be heparinized and treated with high dose corticosteroids, tacrolimus, cyclosporine, etoposide, intravenous immunoglobulin. Plasmapheresis is the last resort for unresponsive cases (21-25). Given the diagnostic difficulty of MAS and the patient’s disease evolution, recognizing MAS is often delayed. Furthermore, having a bone marrow biopsy early in the course of the disease could have guided further treatment, including expanding to cytokine specific therapies. Establishing validated diagnostic criteria for MAS, as well as further clinical trials, are needed to aid in early treatment options. Familial cases are Primary MAS and have a better prognosis compared to secondary. Increased risk of systemic thromboembolism is secondary to systemic inflammation which up-regulates procoagulants in blood with simultaneous suppressing fibrinolysis. Inflammatory myopathies have been reported to cause deep vein thrombosis, pulmonary embolism, and cerebral thromboembolism; however, MAS with right ventricular thrombus is a unique finding in our case.

Rapidly progressive ILD in a patient with autoimmune myopathy like DM is a dreaded complication of the disease. In the case of rapidly deteriorating ILD, one must anticipate MAS and evaluate for thromboembolism along with aggressive initiation therapy.

Conflicts of Interest: All authors have completed the ICMJE uniform disclosure form (available at http://dx.doi.org/10.21037/acr.2020.03.06). The authors have no conflicts of interest to declare.

Ethical Statement: The authors are accountable for all aspects of the work in ensuring that questions related to the accuracy or integrity of any part of the work are appropriately investigated and resolved. The study was conducted in accordance with the Declaration of Helsinki (as revised in 2013). Written informed consent was obtained from the patient for publication of this manuscript and any accompanying images.