Laparoscopic resection of giant adrenal malignant tumors, a case series and review of the literature

Adrenal carcinomas are rare and aggressive malignancies (1). Laparoscopic approach, although a gold standard for benign adrenal tumors, is not reserved for malignant diseases. Since large tumor size bears the possibility of malignancy, it seems even challenging when treating such masses laparoscopically (2). Certainly an oncology council should provide a solution for these patients, however; most of the times the histology confirmation comes after the surgery. Biopsy of these lesions might also spread the disease in surrounding tissue. Therefore experience is needed and these types of surgeries should be performed in specific centers. In this short case series, the outcomes of laparoscopic approach for large malignant adrenal tumors are reported.

Between 2010 and 2017, 64 patients with adrenal tumors were hospitalized and treated in our Department. Five of them were diagnosed with malignant adrenal tumors (Table 1). Accurate preoperative diagnosis was set in one of the patients. This patient was diagnosed with Cushing’s syndrome. On MRI a large adrenal mass and two metastatic liver lesions were observed. For the other patients, preoperative imaging studies were inconclusive and they had nonfunctioning tumors (Table 2).

It is remarkable that the mean size of the tumors was 12.7 cm with a range from 8 to 16 cm. For all of them laparoscopic excision was offered. Lateral transabdominal position was preferred from retroperitoneal approach because of the advantage of the first to explore beyond the ipsilateral gland and evaluate the organs of the peritoneal cavity for metastatic lesions and take biopsies if needed. Furthermore, it allows inspection of the contralateral gland and ‘en bloc’ excision in case of infiltration to the adjacent tissues, gives more working space and allows a good exposure during the removal of the adrenal gland. However, the retroperitoneal approach may be associated with less intra-operative complications and shorted operation time but in our case those drawbacks were eliminated from the experience and the technical excellence of the surgical team.

One procedure was converted to open, since the lesion penetrated the surrounding tissue and it was impossible to achieve total resection laparoscopically.

Operative time was 105 to 170 minutes. There was minimal blood loss in all patients and no need for transfusion. On one occasion, incision was enlarged in order to facilitate the removal of the surgical specimen. The mean postoperative hospital stay from 1 to 5 days (mean, 3 days) (Figure 1,2). There were no perioperative complications (Table 1). 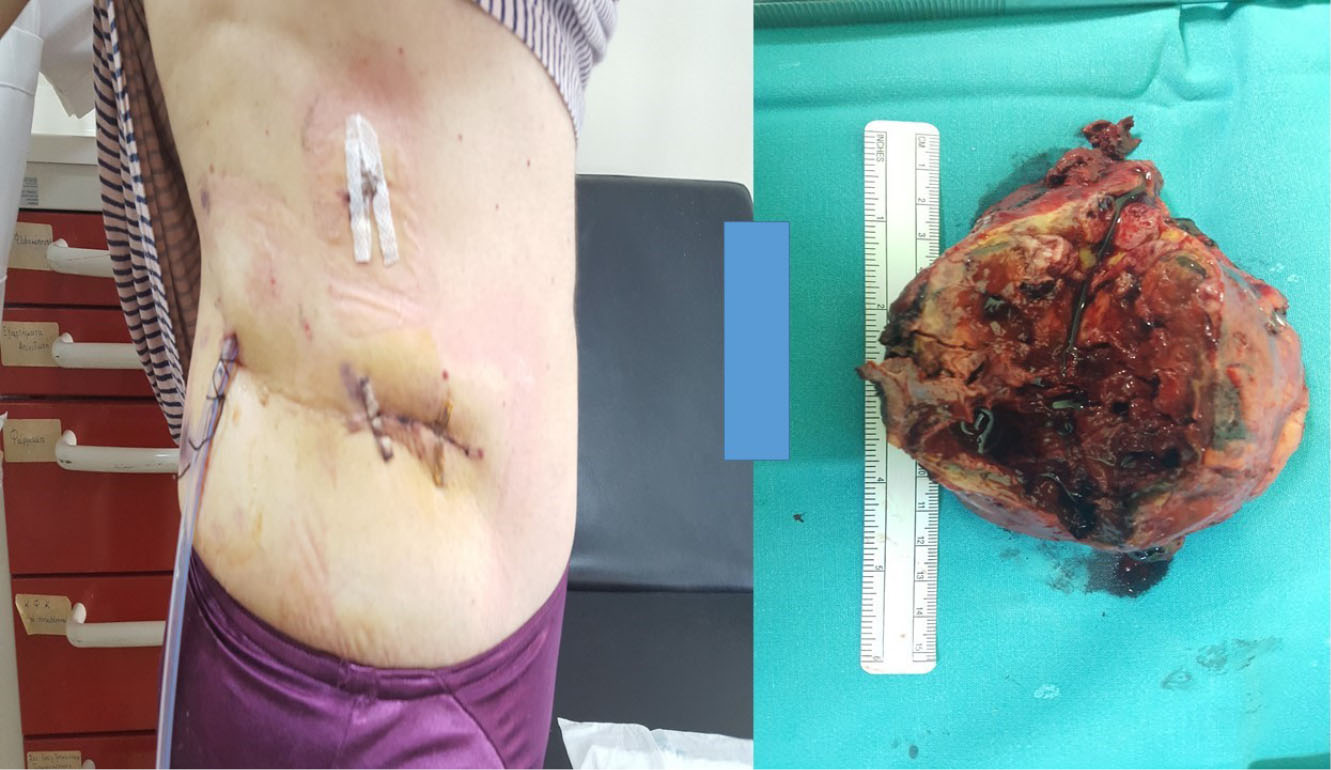 Figure 1 First patient second post-surgery day (left) and the tumor on the right. 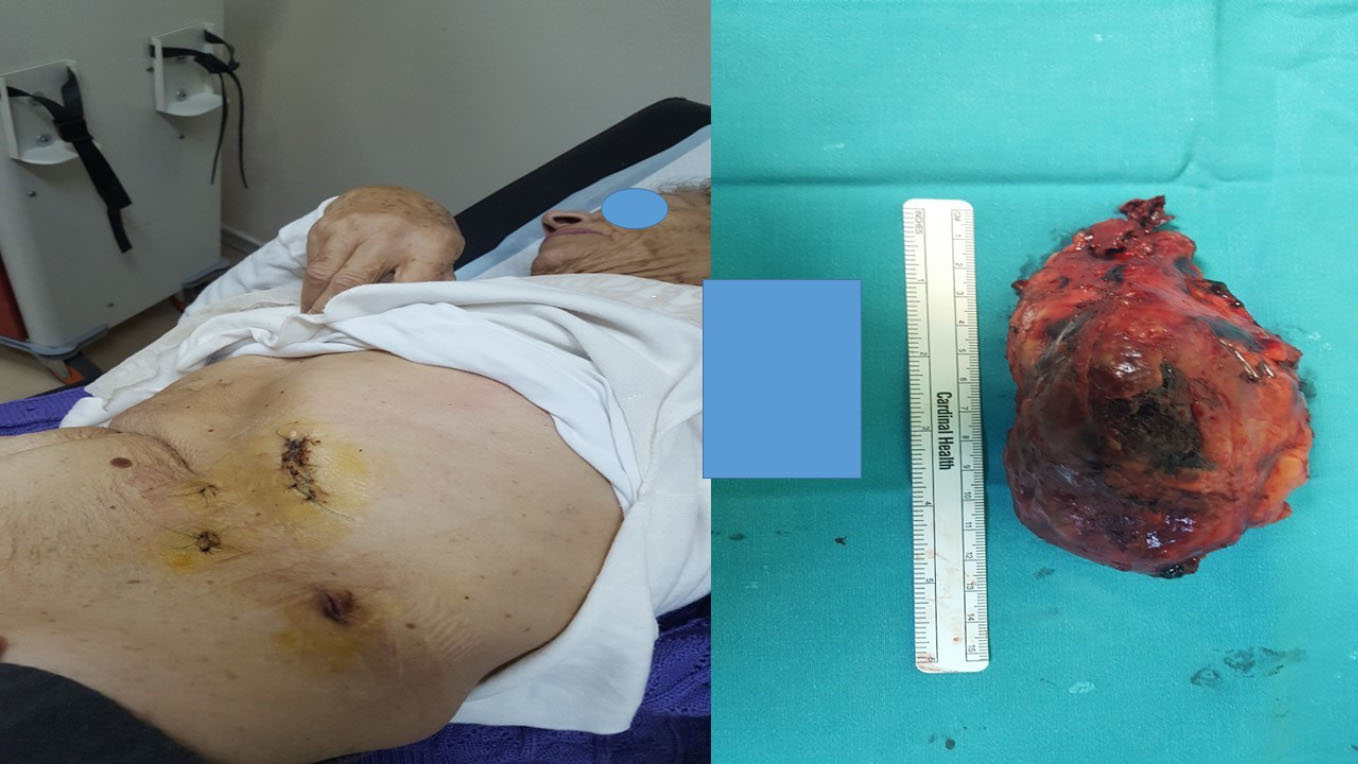 Figure 2 Second patient second post-surgery day (left) and the tumor on the right.

On histology two cases were reported as adrenocortical carcinomas and one as mixed carcinoma (both cortical and medullary). One tumor was metastatic with unknown origin. This patient was referred for further investigation with PET scan since no primary lesion was observed on CT and MRI scans. The last case, which was the converted case, was a malignant paraganglioma. To all patients oncological reference was provided after the histology report. During follow up one case of incisional hernia and one recurrence were observed. Recurrence was noticed for the patient with the paraganglioma.

Primary adrenocortical carcinomas are extremely rare with an estimated annual incidence of about 2 cases per million people (1,3). They may present as a hormone-secreting or inactive tumors. In both instances, most patients are diagnosed at an advanced stage (4). The most common adrenal malignant lesion is metastases. Adrenal metastases are usually bilateral, but may also be unilateral as it was reported in our series. They are present at autopsy in up to 27% of patients with known malignant epithelial tumours. Common primary malignancies include lung, colorectal and renal cancer.

Based on the recommendations of the European Network for the Study of Adrenal Tumors (ENS@T) a pre-operative hormonal workup for suspected ACC. Usually, biochemical assessment is targeted to exclude the diagnosis of phaeochromocytoma, and determine the excessive secretion of steroids/precursors (especially cortisol). Supplementarily, a thoracoabdominal CT with contrast injection within at least 6 weeks before adrenalectomy for suspected ACC is recommended. MRI with gadolinium enhancement is required in patients with doubtful diagnosis, suspected vascular invasion or liver metastasis ENSAT GUIDELINES (5). However, no single imaging method can characterize a localized adrenal mass as ACC. It is important to note that in many patients the ACC diagnosis is confirmed only after surgery; hence the surgical strategy is based on a supposed diagnostic procedure.

This raises the dilemma on which surgical procedure to choose. Considering the aggressiveness of the tumor, the only chance for patients is complete margin-free primary tumour resection, avoiding violation of the tumour capsule or spillage of tumour cells (4,6). Until recently, a lack of standardization for the surgical approach is seen. Current knowledge is based on retrospective studies and expert opinion. No randomized trials comparing laparoscopic and open approaches exist. The published retrospective studies report conflicting results (Table 3). Leboulleux et al. (7), Gonzalez et al. (8), Miller et al. (9), Mir et al. (10), Cooper et al. (11) and Zheng et al. (12) are reluctant to use the laparoscopic approach for ACC. Gonzalez et al. observed frequent local and peritoneal recurrence, Leboulleux et al. (7) found that laparoscopic approach was the only predictive factor of peritoneal carcinomatosis while Zheng et al. (12) concluded on higher frequency of local recurrence. Miller et al. showed that disease-free intervals were shorter in patients undergoing laparoscopic adrenalectomy. No one of them could distinguish the risk of recurrence due to an inappropriate surgical approach or due to an inexperienced surgeon. 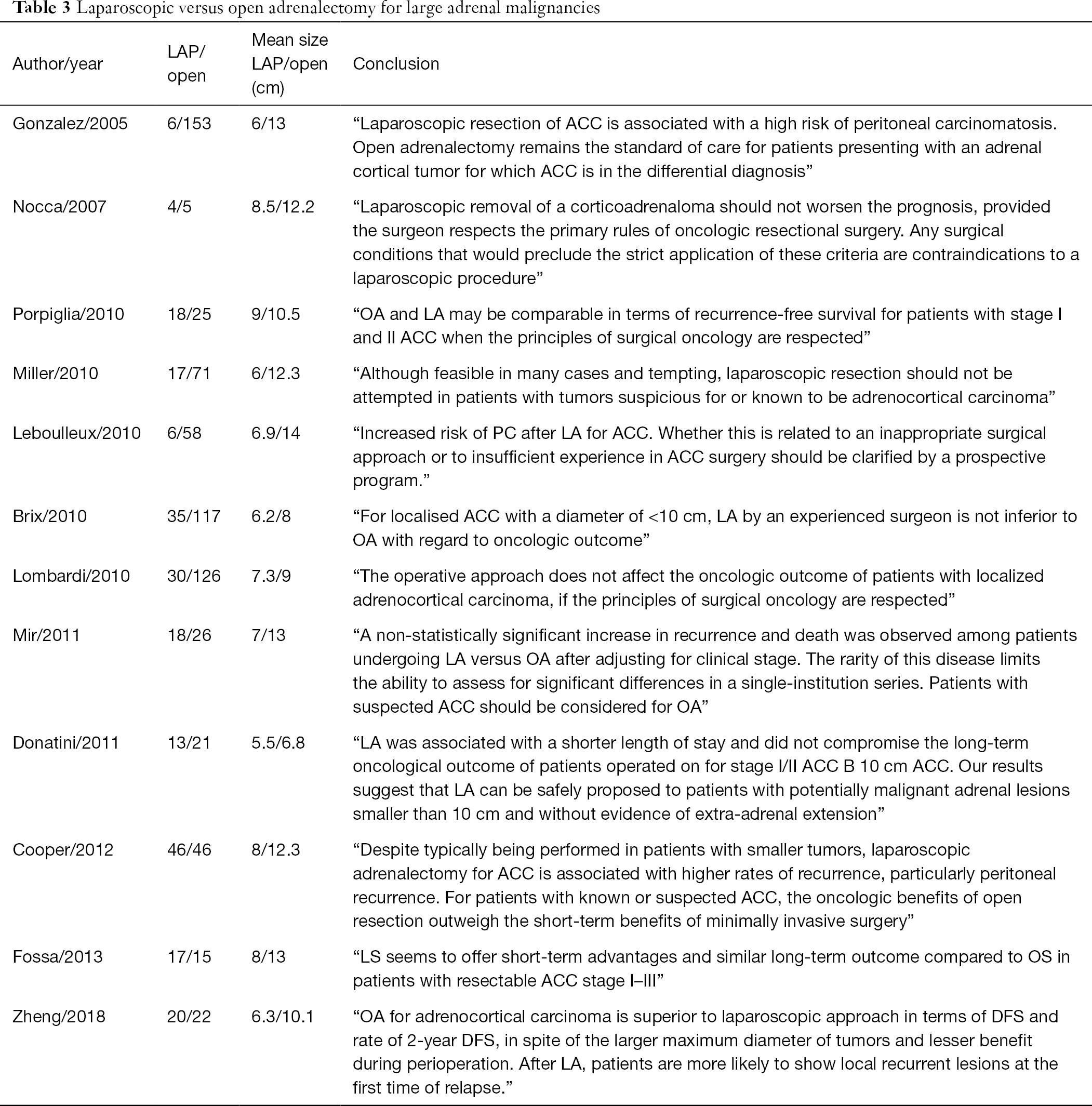 On the other side, Nocca et al. (13), Brix et al. (14), Porpiglia et al. (15), Lombardi et al. (16), Donatini et al. (17) and Fosså et al. (18) support that the laparoscopic approach not only offers the benefits of laparoscopy but also does not affect the oncological outcome. All of them highlight the significance of respecting the rules of oncologic surgery especially for localized ACC with a diameter inferior to 10 cm.

However, no definite conclusion can be given due to their retrospective nature. Moreover, the restricted heterogeneous number of cases, the lack of standardization of the surgical procedure and the short follow-up period complicates a safe conclusion. The majority of these studies agree that a multicenter surgical working panel should be held in order to initiate a prospective trial so as to define the optimal surgical management of adrenal malignancies. In our perspective, laparoscopic transabdominal lateral adrenalectomy is a feasible surgical technique for excision of giant adrenal malignant tumors when rules of oncologic surgery are respected (R0) from experienced and technically excellent surgical teams. Furthermore, despite of recent updates in terms of adjuvant treatment, with mitotane and newer chemotherapy protocols complete local excision has been the only curative treatment. Moreover, from our experience the oncologic outcome is not affected by the operative approach if the principles of oncologic surgery are respected.

Due to the scarcity or the tumor, the lack in preoperative diagnostic procedures and the absence of guidelines in surgical treatment patients with adrenal malignancies should be treated in referral centers by experienced surgeons. In such cases, laparoscopic adrenalectomy of large adrenal malignancies can be feasible in terms of surgical oncology.