Combined single-port transmediastinal and laparoscopic access with CO2 insufflation for esophageal resection: a case report on a canine model

Esophageal cancer surgery, open or video-assisted, requires access to the chest, and thus may result in postoperative complications such as pain, atelectasis, pulmonary infection, pleural effusion and even respiratory dysfunction (1). Transmediastinal esophagectomy can effectively reduce these respiratory complications (2,3). Single-port mediastinoscopy with the use of CO2, combined with laparoscopy has been used in recent years (4-7). However, while thoracic surgeons are familiar with the dissection of the esophagus through a transthoracic approach, they could face difficulties through a single transmediastinal access (8). As part of our familiarization with the technique, we performed single-port transmediastinal esophagectomy in canines. Herein we report our experience with this technique. 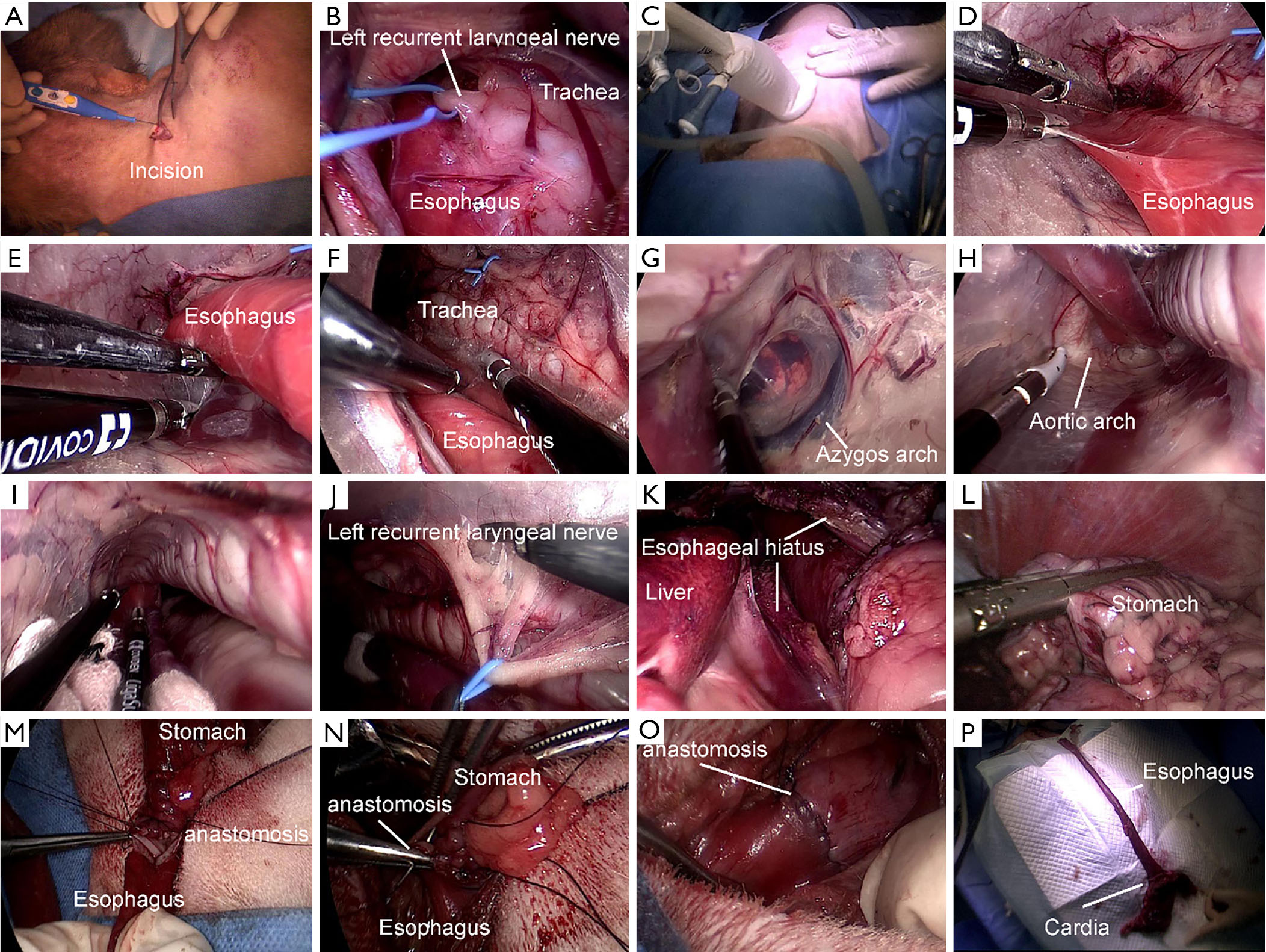 Single-hole transmediastinal laparoscopic combined approach has gradually become a research hot spot in esophageal surgery since 2015 by Fujiwara et al. (7) reported. At first, this method had strict indications for tumor size, and generally required patients with T1 or T2 tumor, no obvious lesion invasion, and no obvious mediastinal LN enlargement. However, with the development of technology and the popularization of clinical practice, the indications gradually expand. Fujiwara et al. (6) reported pretreatment diagnoses of patients were stage I, 19; II, 13; III, 24; IV, 4. Jin et al. (5) has reported the application of mediastinoscopy combined with laparoscopy treatment of two cases of IIIb and seven patients with IIIa, but he was also put forward a not have apparent LN enlargement. Tokairin et al. (4) also reported using this method in patients with stage IIIb esophageal cancer.

Compared with thoracoscopic combined laparoscopic esophageal cancer surgery, the biggest advantage of this operation method is that no incision is made in the chest and no interference to the chest. Besides, the azygos arch, bronchial artery, and heart plexus and lung plexus of vagus nerve are preserved, so the incidence of postoperative cardiopulmonary complications in transmediastinal esophagectomy is minimized, thus expanding the indications for surgery, especially for elderly patients and patients with cardiopulmonary comorbidities. Jin et al. (5) put forward it was beneficial to patients with poor pulmonary function. In transthoracic esophagectomy, pleural adhesion can make the operation difficult. However, via the transmediastinal approach pleural adhesions can prevent a pneumothorax in case the parietal pleura is accidentally incised. Therefore, instead of making mediastinoscopy difficult, pleural adhesion may make surgery easier to some extent.

The injection of CO2 into the mediastinum makes the surgical field clearer, thus making the separation of esophagus easier and safer. Important structures such as left RLN, thoracic duct and azygos vein should be avoided during operation. Azygos and bronchial arteries in particular, once damaged, can cause bleeding that is difficult to stop. In order to avoid intraoperative bleeding, the following should be followed. First, esophageal dissociation follows this sequence: this sequence makes it easier to identify these important tissues and avoid damaging them. Second, the Maryland energy devices are required to separate the tissues. Compared with other energy devices, Maryland’s thermal insulation device can avoid damaging blood vessels and other important tissues. Thirdly, once intraoperative bleeding occurs, small gauze strips can be used to compress and stop the bleeding, and the bleeding can be performed in lateral position after thoracotomy. Finally, the anesthesiologist had better ventilate with double-cavity endotracheal intubation to facilitate thoracotomy for hemostasis after bleeding.

The insufflation of CO2 in to the mediastinum enlarged the surgical space, which was helpful to fully expose the left RLN, para-esophageal, subcarinal and mediastinal LNs, making it easier to remove them. Compared with thoracoscopic combined laparoscopic esophagectomy, this procedure can fully expose the left RLN. It is difficult to expose the left RLN in the cervicothoracic junction by thoracoscopic combined with laparoscopic esophagectomy. However, inflatable mediastinoscopy combined with laparoscopic esophagectomy cannot remove the right recurrent laryngeal paraspinal LN in the mediastinum, which often requires an additional incision on the right side of the neck to remove the right recurrent laryngeal paraspinal LN. Tokairin et al. (4) reported the bilateral cervical nodes were additionally dissected by the open method. Wang et al. (9) reported less dissected LNs were detected in the inflatable mediastinoscopy group (12.2±5.4 vs. 16.8±5.8, P=0.044) than in the Ivor Lewis group. Jin et al. (5) reported that during mediastinal LN dissection, the number of right RLN LNs under mediastinoscopy was significantly less than that under thoracoscopy (P<0.05). However, Li et al. (10) reported that the transcervical inflatable mediastinoscopy esophagectomy had more LN dissection than the right thoracic esophagectomy.

There is no doubt that the operation of the transcervical inflatable mediastinoscopy esophagectomy is significantly more difficult than that of thoracoscopic esophagectomy. First of all, the thoracic inlet through the upper margin of the manubrium sternum is very narrow, which results in all instruments entering the mediastinum being crowded and interfering with each other. Second, despite the carbon dioxide filling, the space of the mediastinum is much smaller than the thoracic cavity, and the separation of the esophagus is more difficult, especially the right side of the esophagus and the adhesion with the left main bronchus. Thirdly, once there is a small hemorrhage in the operation, the anatomical space will be unclear, resulting in increased operational difficulties behind, and once there is a large hemorrhage, it is very difficult to deal with, often to change the lateral position through thoracic surgery to stop the bleeding.

Anatomical differences between dogs and humans may lead to some surgical differences. First of all, the mediastinal pleura of the dog is not complete, left and right thoracic coherence. These can lead to intraoperative pneumothorax, which can lead to airway hypertension during mechanical ventilation. In addition, the large circular ligaments of the liver in the experimental animals may hinder the dissection of the hiatus. To facilitate surgery, the circular ligament of the liver must be removed before dissecting the hiatus. Carefully retract the left lobe of the liver with a fan liver retractor under laparoscope. Thirdly, when dissecting the lower mediastinal esophagus through the hiatus, it is easy to open the left and right mediastinal pleura and enter the left and right thoracic cavity.

Combined single-port transmediastinal and laparoscopic access with the CO2 insufflation is an alternative approach for esophagectomy with certain advantages compared to transthoracic approach. Animal models can help the surgeon get familiar with a certain procedure before operating on a human.

Ethical Statement: The authors are accountable for all aspects of the work in ensuring that questions related to the accuracy or integrity of any part of the work are appropriately investigated and resolved. This study was carried out in strict accordance with the recommendations in the Guide for the Care and Use of Laboratory Animals of the National Institutes of Health. The protocol was approved by Minutes of meeting of the animal welfare and ethics committee at Medtronic clinical training centre (MIC) (Protocol Date: 20170705). All surgery was performed under sodium pentobarbital anesthesia, and all efforts were made to minimize suffering. The experimental dog was euthanized and buried after the experiment.