Post mastectomy radiation therapy (PMRT) plays a crucial role in the treatment of various malignancies, whether as a primary, adjuvant, or neoadjuvant treatment modality. Although XRT is beneficial in reducing cancer recurrence and improving survival in invasive disease, it is not without risks. PMRT induces varying degrees of acute and chronic changes to the soft tissues and underlying structures of the entire radiation field. A less common but more serious complication is radiation arteritis. Patients suffering from radiation arteritis present months to years following PMRT with arterial occlusive disease in the irradiated field. Specifically, PMRT induces medial fibrosis and thickening of the endothelium. These changes compromise the arterial lumen, as luminal narrowing predisposes to mural thrombus formation with eventual occlusion and/or distal embolization (1,2).

Arterial occlusive disease of the subclavian and axillary arteries can occur in rare circumstances following XRT for the treatment of breast cancer (3). These patients present with symptoms consistent with ischemic claudication of the upper extremity (1). In the case below we report on a patient presenting with right upper extremity pain and discoloration of her digits following PMRT for the treatment of breast cancer. After a multidisciplinary evaluation, she was diagnosed with radiation arteritis and underwent carotid to brachial artery bypass. 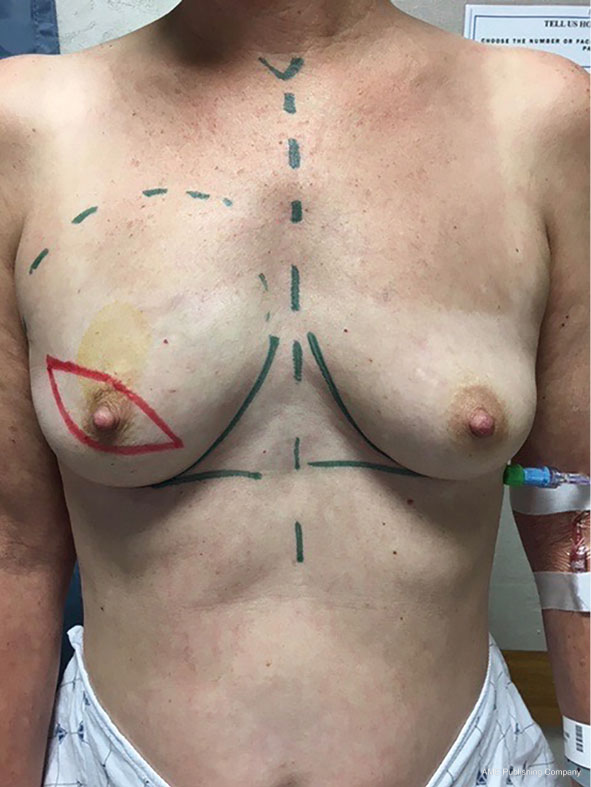 Approximately four months following completion of her adjuvant radiation therapy, she presented with right upper extremity pain, weakness, fatigue, and neuropathy to the senior author SRS. This was initially believed to be related to her chemotherapy and she was treated with lymphedema therapy and pregabalin. However, her symptoms failed to improve, and she was noted on exam to have non-palpable pulses at the level of the brachium and wrist, and acrocyanosis of her small finger. She was referred to vascular surgery and was diagnosed with ischemic claudication. Right upper extremity angiogram was diagnostic for vascular occlusion from the take off of the right subclavian to axillary artery. Endovascular intervention was not considered due to the patient’s history of radiation. She was diagnosed with radiation arteritis.

Computed tomography angiography (CTA) revealed occluded right subclavian and axillary arteries with reconstitution of the brachial artery via collateralization (Figures 3). In order to avoid tissue loss, the patient underwent right upper extremity revascularization with a right carotid artery to right axillary artery bypass with a polytetrafluoroethylene (PTFE) graft. This was performed approximately one year following completion of her radiation therapy, and nearly two years following her mastectomy. The patient recovered uneventfully and again presented to the senior author to discuss reconstructive options. 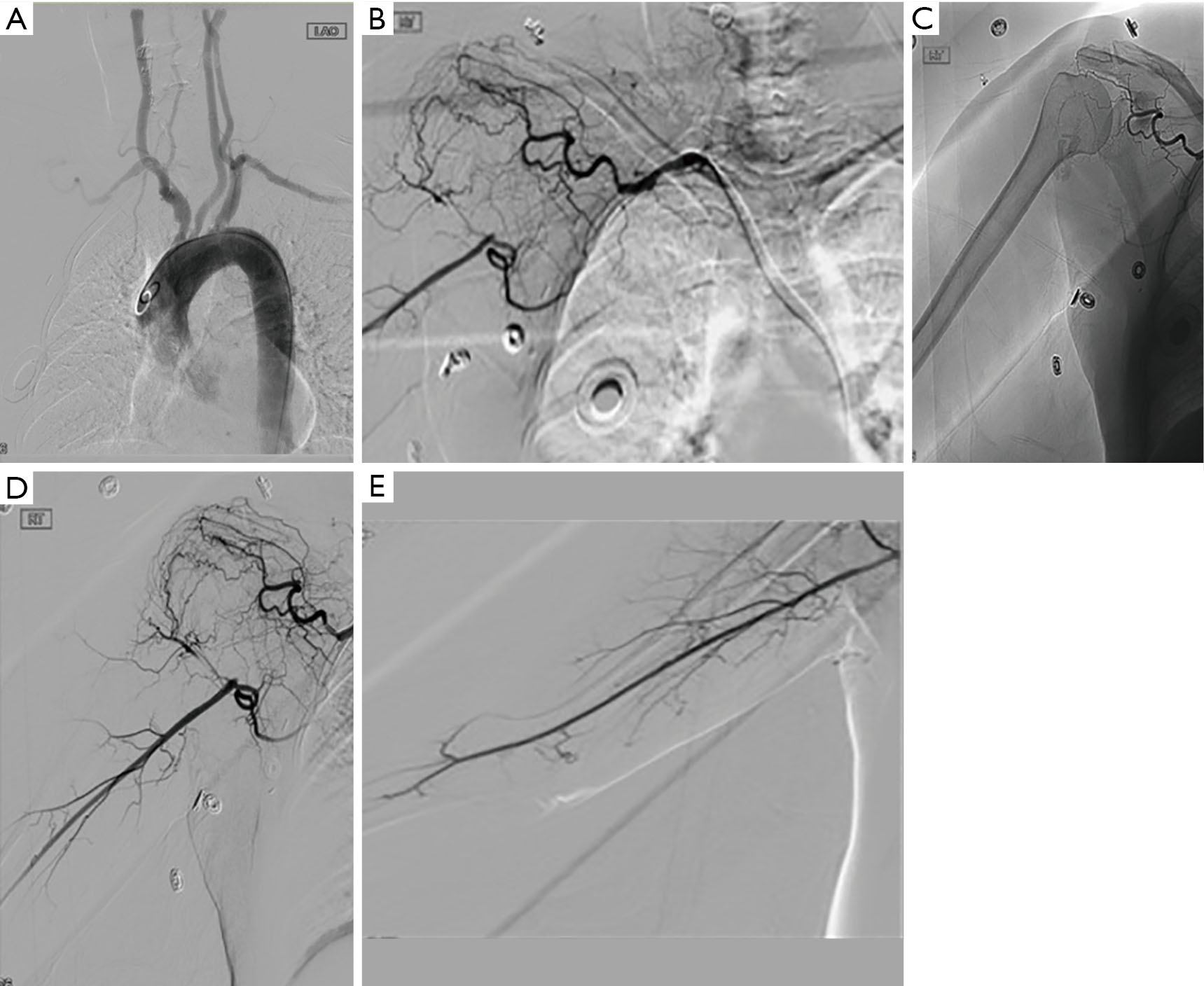 Figure 3 CTA demonstrating occlusion of the right subclavian (A) and axillary arteries (B,C,D) with reconstitution of the brachial artery via collateralization (D,E). CTA, computed tomography angiography.

Previous discussions with the patient were centered around autologous options for right breast delayed immediate reconstruction. Our first option was an abdominally based free flap; however, due to the vascular occlusion and reconstruction with PTFE there were no recipient vessels available in the right chest or axilla. The patient also did not have a saphenous vein available for vein graft. During her recovery and preoperative evaluation for reconstruction the patient was found to have a hilar mass which was biopsied and found to be a new lung primary. Definitive breast reconstruction was delayed in order to avoid delaying therapy.

Radiation arteritis should be considered as part of the differential for any patient presenting with signs of upper extremity ischemic claudication following PMRT for the treatment of invasive breast cancer. Although rare, its actual incidence is undetermined, and can develop anywhere from a few months to decades following radiation exposure (4). Clinicians should be aware of the possibility of post-mastectomy radiation arteritis, especially in patients presenting with limb pain or weakness. Increased awareness will aid in diagnosis and prevent delays in treatment and complications during reconstruction.

Indications for intervention in patients presenting with radiation arteritis of the subclavian and axillary arteries are similar to those in patients with atherosclerotic occlusive disease, and are based upon anatomy, severity of symptoms, and prognosis. Percutaneous revascularization is usually not feasible given the typical long segment occlusion of the artery, as in our case above. Therefore, bypass graft is typically the intervention of choice when treatment is indicated (1).

There are few documented cases of radiation arteritis following treatment of breast cancer in the literature. One report by Rubin et al. detailed a 66-year-old woman who presented with right upper extremity weakness and acrocyanosis twenty-one years following local radiation for the treatment of right breast cancer (2). Arteriography revealed stenosis at the origin of the right subclavian artery, with an ulcerated plaque at the subclavian-axillary junction and irregular luminal narrowing throughout the axillary artery. Surgical revascularization with a carotid artery to subclavian artery bypass procedure was recommended; however, the patient declined intervention and elected to receive aspirin only.

Another paper by Hashmonai et al. presented two cases of subclavian artery occlusion following radiation therapy for the treatment of breast cancer (5). The first patient was a 67-year-old female who presented with progressive left upper extremity pain and weakness twenty-three years following XRT for left breast cancer. The patient stated her symptoms began approximately ten years following XRT. Arteriography showed complete occlusion of the left subclavian artery distal to the origin of the vertebral artery, with poor reconstitution of the brachial artery via collaterals. The patient underwent a left subclavian artery to brachial artery bypass with PTFE, and her symptoms completely resolved. The other patient discussed was a 74-year-old woman who developed acute onset ischemic claudication eighteen years following PMRT. As her symptoms were not yet severe, no intervention was indicated and she was followed for two years until she died from a myocardial infarction.

Unfortunately, no information was provided in any of the above cases regarding possible breast reconstruction performed, if any. Our case here is unique in the literature as it describes the rare presentation of radiation arteritis following XRT for breast cancer, but also because it demonstrates the potentially limited reconstructive options for breast cancer patients who develop radiation arteritis of either the subclavian and/or axillary arteries.

Given her history of radiation therapy, delayed healing of mastectomy skin flaps, and her smoking history, she was unfortunately not an ideal candidate for definitive prosthetic-based breast reconstruction. The patient also wanted to have larger breasts.

Based upon our patient’s anatomy and history, her autologous reconstructive options going forward are limited. In terms of recipient vessels sites for free flap anastomosis, one could use her contralateral internal mammary artery system; however, due to the hilar node she will have targeted proton therapy in that region. The second option would be a contralateral pedicled TRAM flap; however, we would likely transfer the flap after a delay.

Interestingly, the patient in our case developed symptoms of ischemic claudication much earlier than those patients in the other cases mentioned above. She developed symptoms less than a year following completion of her XRT, while the patients in the above cases presented decades following treatment. It is possible that she developed symptoms much sooner given her history of hypertension and heavy smoking, both of which are known risk factors for vessel disease (1). The other patients mentioned in the included studies had no known medical issues which would have predisposed them to the development of vascular disease.

Radiation arteritis is a rare but serious potential complication of radiation therapy for the treatment of breast cancer. Increased awareness will aid in diagnosis, prevent delays in treatment, and reduce intraoperative complications. Understanding the implication of radiation arteritis on potential breast reconstruction donor and recipient vessel systems will assist surgeons and patients in making informed decisions about breast reconstruction.

Ethical Statement: The authors are accountable for all aspects of the work in ensuring that questions related to the accuracy or integrity of any part of the work are appropriately investigated and resolved. Written informed consent was obtained from the patient for publication of this Case report and any accompanying images. A copy of the written consent is available for review by the Editor-in-Chief of this journal.