Mucormycosis is an emerging angioinvasive infection caused by the ubiquitous filamentous fungi of the Mucorrales order of class Zygomycetes (1). Pulmonary mucormycosis is relatively rare and occurs in immunosuppressed patients, for example, individuals with hematologic malignancies such as leukemia. As pulmonary mucormycosis increases rapidly and is often fatal, appropriate treatment including surgical resection is necessary (2,3).

Here, we report a patient with pulmonary mucormycosis and acute myelogenous leukemia. After surgical resection was performed, this individual was administered a peripheral blood stem cell transplantation and she had complete remission.

A 59-year-old woman visited our hospital because of dry cough and malaise. She was a non-smoker and had no major past history. Laboratory data showed anemia (hemoglobin 7.5 g/dL) and thrombocytopenia (platelet count 21,000/µL). Examination of the patient’s bone marrow aspiration revealed 100% of blast cells positive for peroxidase staining, which resulted in a subsequent diagnosis of acute t(8;21) myelogenous leukemia in the WHO classification.

Induction chemotherapy with daunorubicin (DNR) and cytarabine (AraC) was initiated, and after three courses of consolidation therapy, the patient was diagnosed to be in remission. However, that patient was diagnosed with recurrence after 7 months by bone marrow aspiration. Reinduction therapy was initiated, and he had complete remission. However, during treatment the patient developed an exotherm at 38.4 °C during neutropenia. Febrile neutropenia was suspected, and the patient was treated with antimicrobial medicines (meropenem, levofloxacin, and teicoplanin) and prednisolone. However, the patient did not show improvement. A chest CT scan showed an invasive shadow in the upper lobe of the right lung (Figure 1A). Fungal infection was suspected at this point and antifungal medication (liposomal amphotericin B) was administered. However, the pulmonary lesion rapidly increased in size and showed cavities and mass nineteen days later in a second chest CT scan (Figure 1B). At this point, the patient was judged to need an emergency surgical resection, and a right upper lobectomy was performed. No adhesion or pleural effusion occurred and surgery was completed without complications. The clinical course was shown in Figure 2. Because her renal function became gradually worse, liposomal amphotericin B could not be used in maximum dose. 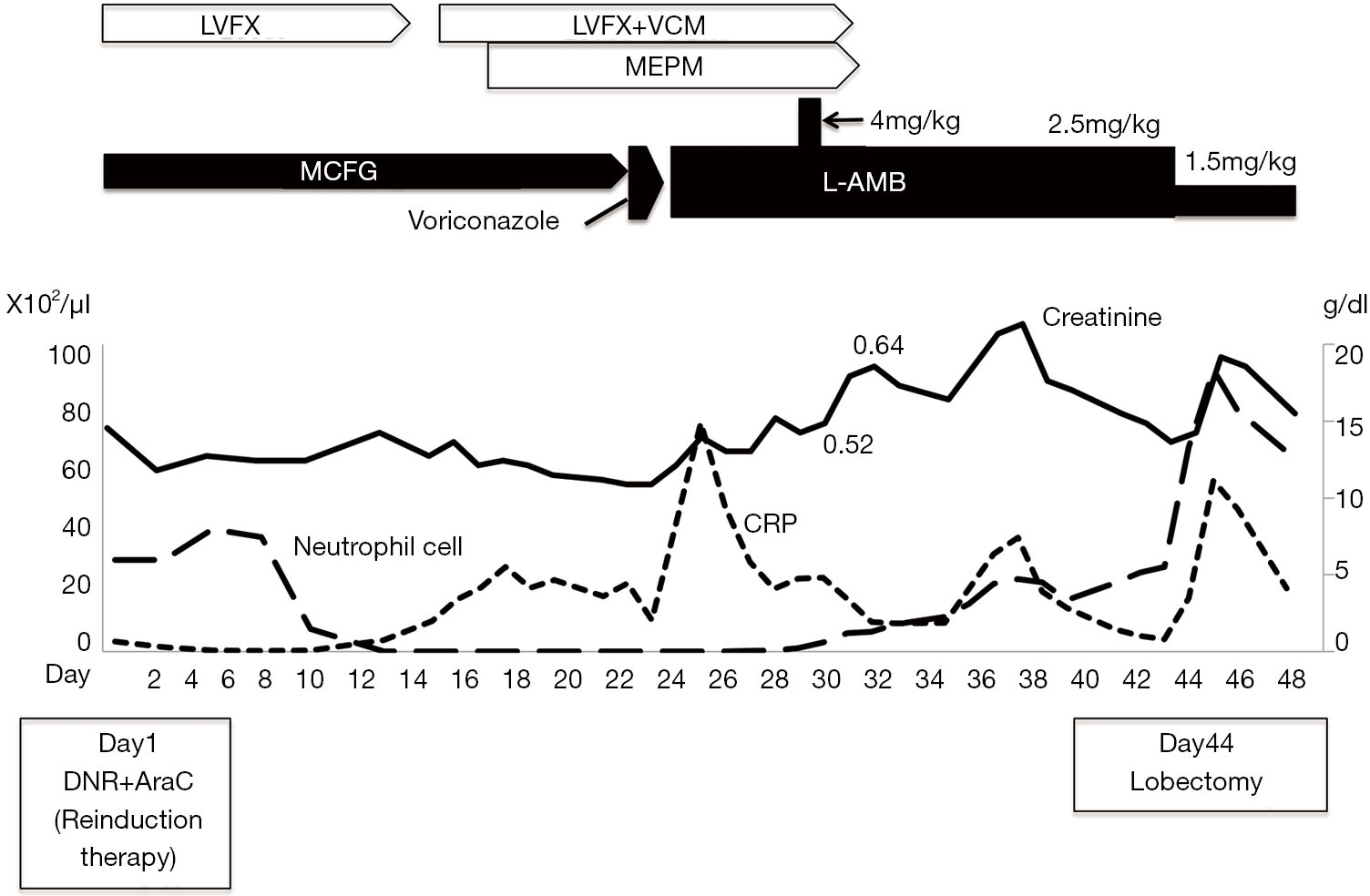 The patient’s postoperative course was good. Histopathological diagnosis was mucormycosis, with necrosis and angioinvasion by mycelium (Figure 3). Administration of liposomal amphotericin B was prolonged, and 49 days after surgical resection, the patient received a peripheral blood stem cell transplantation from HLA haploidentical daughter using posttransplant cyclophosphamide as prophylaxis of graft versus host disease. Although no major complication was observed after transplantation, leukemia recurred and the patient died 2 years after the transplant.

Figure 3 Macroscopic findings revealed a cavity in right upper lobe (A). Histopathological findings indicated angioinvasion by mycelium and coagulative necrosis in hematoxylin and eosin staining (B).

We observed two important clinical issues. First, pulmonary mucormycosis that developed during therapy-induced myelosuppression of acute myelogenous leukemia proceeds rapidly. In our case, that patient’s pulmonary consolidation was rapidly exacerbated in just 3 weeks. Pulmonary mucormycosis occurs in immunocompromised patients, such as those with hematologic malignancy, diabetes mellitus, or renal failure (2,3). Common symptoms such as fever, cough, bloody sputum, chest pain or dyspnea resemble the symptoms of aspergillosis (4,5). Pulmonary mucormycosis tends to occur in the right upper lobe, and is often observed as consolidation and cavitation in a chest CT scan, as in the current case (3,6). Thus, clinical features were relatively typical of mucormycosis in our case.

There is a possibility of curability if surgical resection is performed in a timely manner. In particular, it is important to overcome mucormycosis for patients with leukemia considering hematopoietic stem cell transplantation. In the current case, the patient received peripheral blood stem cell transplantation after aggressive surgical pulmonary resection. Tedder et al. reported 30 pulmonary mucormycosis patients treated at his institution and 225 cases reported in the literature (2). The most common associated conditions were hematologic malignancies such as leukemia and lymphoma, which occurred in 95 patients (37%). Interestingly, although surgical resection was performed in 11% of patients, the mortality rate of these patients was better than that of the patients with medication therapy only. In addition, Lee et al. reported that aggressive surgical treatment could improve the prognosis of pulmonary mucormycosis (3). Tedder et al. reported that the most common causes of death were fungal sepsis, respiratory insufficiency, and hemoptysis, and aggressive surgical resection could improve the prognosis in addition to antifungal agent confined to one lung (2). Thus, it is important not to miss the timing of surgical resection; however, it remains difficult to diagnose early mucormycosis. Vidovic et al. reported a patient with invasive pulmonary mucormycosis successfully treated with amphotericin B, and surgery in a patient with acute myeloblastic leukemia whose pulmonary disease was diagnosed as mucormycosis by bronchoscopy before surgery (7). Although it may be important to confirm this diagnosis before surgery, like our case, there is a possibility that the condition could worsen during the wait for culture results, making it necessary to consider surgery without these results. Overall, we considered the performance of frequent image inspection, such as a chest CT scan, to be important in immunosuppressed patients with pulmonary infection. As a good prognosis can be expected in patients with hematologic malignancies that undergo hematopoietic stem cell transplantation, more careful observation and aggressive treatment should be performed.

In conclusion, we emphasize that patients with pulmonary mucormycosis undergoing leukemia treatment should be considered for rapid surgical treatment if the infected lesion is limited, because overcoming this acute infection increases their chance to undergo hematopoietic stem cell transplantation and potential for long-term survival.

We thank Edanz Group (www.edanzediting.com/ac) for editing a draft of this manuscript.

Ethical Statement: The authors are accountable for all aspects of the work in ensuring that questions related to the accuracy or integrity of any part of the work are appropriately investigated and resolved. Written informed consent was obtained from the next of kin of the patient.