Anorexia nervosa is a mental disorder with high prevalence in the young adult population and it can be associated with serious systemic complications (1). Although rare, pulmonary involvement of anorexia nervosa related to chronic malnutrition, decreased total lung protein content and structural alterations in lung parenchyma might lead to life-threatening consequences (2). In recent literature, indeed, cases of spontaneous pneumothorax and pneumomediastinum related to starvation are reported (3). We describe here, instead, a case of a young adult patient affected by anorexia nervosa who developed re-expansion pulmonary edema after drainage of traumatic pneumothorax. We also delineate relevant pathophysiological mechanisms underlying development of re-expansion pulmonary edema as a complication of anorexia nervosa and we summarize successful clinical management.

A 21-year-old female patient was admitted to the emergency department with cough, dyspnea and pain to the right hemi-thorax. Four days earlier, the patient accidentally fell from approximately 1 meter. and reported non-penetrating right chest trauma. The patient suffered from anorexia nervosa: she appeared emaciated and underfed, with a body mass index of 11.7 kg/m2. Chest palpation evoked intense pain on the right chest side, while breath sounds were not evaluable due to uncontrollable cough. A first chest X-ray was performed, showing right pneumothorax and rib fractures (Figure 1A). A 16-Ch right chest tube was promptly inserted and connected to a water seal, but no re-expansion of the right lung was evident at a new chest X-ray (image not shown). The following day, the water seal was substituted with an aspiration system set at −20 cmH2O and a chest X-ray was performed showing successful pulmonary re-expansion and unilateral right lung edema (Figure 1B). Chest CT scan confirmed unilateral re-expansion pulmonary edema with patchy diffuse consolidation of the right lung (Figure 1C). The patient was admitted to the intensive care unit and started on non-invasive respiratory support, alternating helmet continuous positive airway pressure (CPAP) with positive end-expiratory pressure (PEEP) 10 cmH2O and nasal high flow with flow 40–60 L/min, until resolution of the re-expansion pulmonary edema three days later (Figure 1D). 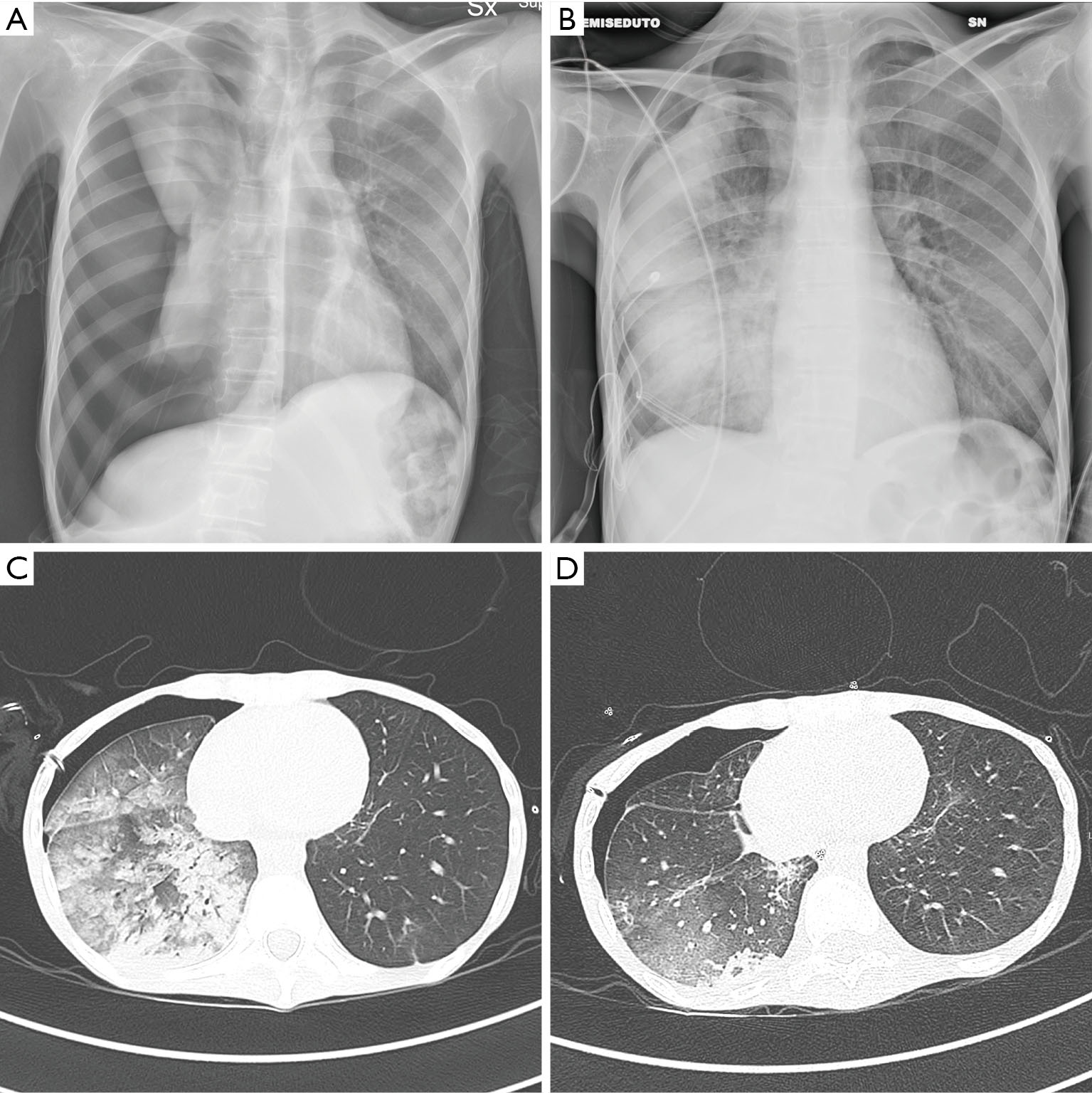 Incidence of re-expansion pulmonary edema is variable (from 0.9% to 29.8%) (4) due to the wide spectrum of clinical symptoms and ambiguous diagnostic criteria (5). The presented case had many risk factors: prolonged lung collapse, age in the 20–39 range and sudden re-expansion of the lung by high suctioning pressure (6). In addition, the malnutrition resulting from anorexia nervosa may have led to depletion in total lung protein content and decrease in elastin and surfactant production (7-9), facilitating complete lung collapse. Moreover, impairment of architectural lung structure deriving from chronic malnutrition (2) may have further decreased stiffness of the lung leading to collapse and necessity of high negative pressure for complete re-expansion. Complete collapse and prolonged duration of the pneumothorax (likely up to 5 days in the present case) may, in turn, have induced unilateral hypoxic pulmonary vasoconstriction (10) with high pressure in the pulmonary capillary system, ultimately resulting in extremely high transmural pressure and hydrostatic alveolar leak at the time of re-expansion.

Ethical Statement: The authors are accountable for all aspects of the work in ensuring that questions related to the accuracy or integrity of any part of the work are appropriately investigated and resolved. Written informed consent was obtained from the patient for publication of this Case report and any accompanying images.